In this week's post, Matthew takes us along on a CAPA My Global Education excursion to the Blue Mountains and continues his hike after the group adventure to take in more of the magical scenery.

As part of your semester in the Global City of Sydney, CAPA takes you on an excursion through the Blue Mountains and to the popular Scenic World attraction. I had the privilege of going to the Blue Mountains twice as I had made a trip up to the majestic hills two week prior to the CAPA trip. The day I went solo accompanied James, by one of my roommates, happened to be the same day Australia’s eastern coast had its most powerful storm in over five years. Because of the downpour, we weren’t able to see much of the valley or the neighboring mountains; despite this, the hike was thrilling and well worth the shivering two hour train ride back to the city in our water-logged clothes and shoes.

It had rained the night before the CAPA excursion but luckily the clouds began to part the next morning and we enjoyed good weather the day we explored the mountains. We had to be outside the Urbanest apartments at 7am to board the bus which would take us to our destination. Scott, a cheery Aussie fellow with a thick accent, was our tour guide for the day. He would periodically stand at the front of the bus and provide us with some interesting fact or just to give us updates on our eta to the next stop. The bus was one of those huge tour-type buses with comfortable seating, cubbies above the seats for extra baggage and even had personal fans like you would see on an airplane. There was a radio playing cheesy music for most of the trip except when Scott would turn it down to make a broadcast. To my surprise, we didn’t go straight to the Great Dividing Range. The bus made a stop at the Featherdale Wildlife Reserve where I was able to pet a koala bear, feed kangaroos, and see all different sorts of animals native to Australia. We arrived at Featherdale about 8:30 in the morning and departed around 10:00am, so it was plenty of time to visit all of the exhibits given that the reserve was fairly small.

Around midday, we rolled into the town of Katoomba which is the main hub to access the Blue Mountains. We were surprised to find a festival and parade going on in the main street. Our bus had to make several detours to reach Scenic World and Scott informed us that the annual Winter Solstice celebration was going on today and we would be able to see people dressed as witches and wizards. This was quite amusing because it seemed as though Aussies were celebrating Halloween in the middle of June, but I guess it makes sense since their seasons are reversed from those in the US. At Scenic World, we grabbed some lunch (make sure to bring money, since you’ll be paying for your own meal) and started the hike down the mountainside. 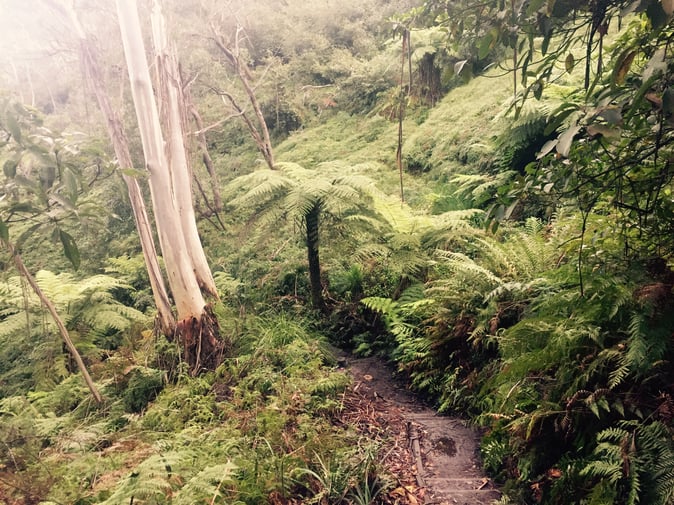 Surprisingly, the Blue Mountains are not that tall although you can’t really recognize this fact while there. Compared to the Sierra Nevada and Rockies in the United States, Australia’s mountains are hills and only reach an average of 4,000ft. But I have to reiterate that you can’t tell the difference once you’re in these mountains. The terrain is rugged and there are steep cliffs around every corner. A hike down will take you through Sméagol-like staircases and canopies out of a scene from Jurassic Park. I love to hike and, growing up in California, there were many opportunities to do so but never before had I been in a rain forest!

On the CAPA excursion, you are able to get a free ride back up the mountain on the steepest railway in the world which bring you right back to the café at Scenic World. Since I had been to the Blue Mountains prior to the trip and knew some trails that needed further exploring, I broke off from the group at the bottom of the mountain and enjoyed a three hour hike through the valley and back up another cliff to Echo Pint. Although I wouldn’t recommend hiking alone (it’s very easy to get lost there) I would encourage you to explore the trails further after the day with CAPA is over or go back another day and see what else these enchanting mountains have to offer.

During my hike, I thoroughly enjoyed the solitude, the chorus of sounds in the rain forest, the occasional scream from an invisible bird in the trees, and of course the gasping views I would stumble upon after a clearing or reaching a high point in the trail. Sometimes I could go miles without seeing a soul. Once I crossed the valley and was hiking along the mountainside back to Echo Point, I could hear the distant sounds of the drums from the Winter Solstice parade in Katoomba. With the thump thump thump of the distant drums, I finished the last few kilometers of the hike as the daylight vanished on this shortest day of the year in the Land Down Under. I caught a bus at Echo Point into the town of Katoomba (which was free with the Opal cards CAPA provides) and ordered a beef kabab to satisfy my hunger from the day’s exertion. I had about forty minutes before the train to Central Station was to arrive, so I moseyed around Katoomba Street which was filled with food stands and vendors and just took in my surrounding. There was a reggae band playing in a nearby courtyard and tons of people were filing about around me.

If you are in Sydney and it’s too cold for the beaches, you don’t feel like being in the city, or you just want something outdoorsy to do, then the Blue Mountains are your answer. They will never disappoint. Magical is the only word worth describing the scenery.