Exploring the Uffizi Gallery: My Happiest Moment in Florence 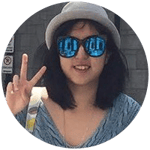 In this week's post, Jiwon takes us on a tour of the Uffizi Gallery to show and tell us about her favorite pieces.

Because I'm in the place where the Renaissance started, I chose to take a renaissance art history class. There's nothing like being surrounded by the historic art and architecture I'm learning about. We spend half the class learning the history of what we're going to see and spend the other half exploring and seeing the actual art and architecture. I have seen beautiful work by the famous renaissance masters Michelangelo, Leonardo Da Vinci, Raphael, Donatello, and Brunelleschi. Seeing these pieces of art that are legends to art history students like me made my legs go weak and brought me to tears. My favorite trip to see works like these was to the Uffizi Gallery.

If you are in Florence you have to go to the Uffizi Gallery. You might be scared at first because of the long lines and ticket price but it's worth every euro. If you decide not to go, you'll miss seeing half of Florence. It was really crowded at the entrance, and I was glad I brought my fan or I would have been cooked. But as soon as I saw the hallway of the museum I forgot all about the discomfort. There were hundreds and hundreds of rows of sculptures and rooms full of master pieces. It took me 4 hours to look at all the art work. 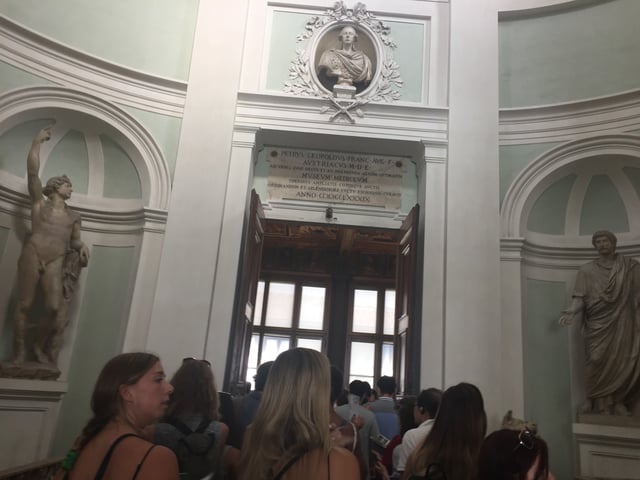 I first saw pre-renaissance pieces. There was an Alter piece decorated by flattened Florence gold. It lacked depth and natural elements but it had it’s charm. Then we moved to the Botticelli room and I saw Botticelli’s ‘Primavera’ and ‘Birth of Venus’, famous works so well known and parodied in lot of different media. They were beautiful. 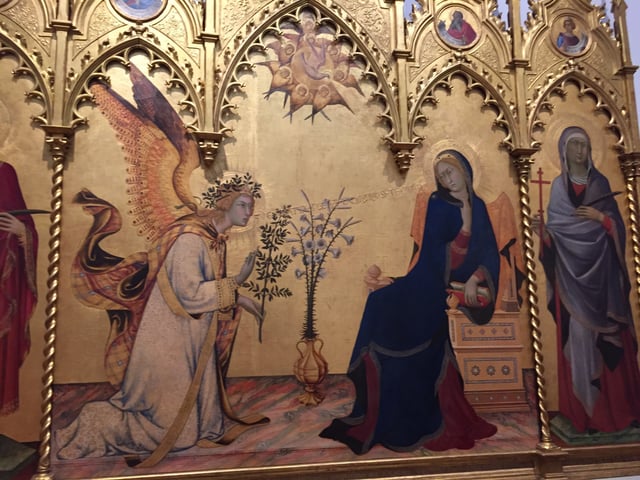 Botticelli’s works were stunning. The only work I knew from his was his portrait of the Duke and Duchess of Urbino, Primavera, and Birth of Venus, but I was able to see other of his less famous works, too. Did you know the face of Venus and Ideal Woman Botticelli often drew in his paintings was modeled after a real woman? Her name is Simonetta Vespucci and even though she died at the young age of 22, Botticelli used her face over and over again even after her death. Some say she was Botticelli’s muse. 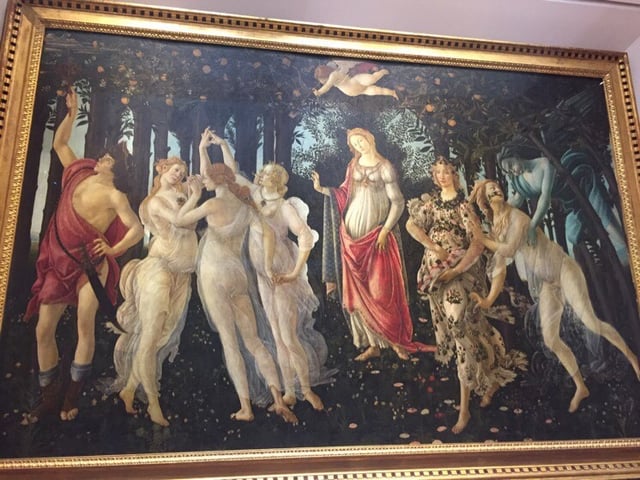 I also saw Doni Tondo, one of the few surviving paintings by Michelangelo. The skin and silk clothes in the painting looked so soft and real, I thought it moved for a bit. The color was unexpectedly bright and pastel, I thought it would be darker and controlled like Last Judgment. There was also Leonardo Da Vinci’s restored Admiration of Magi, his first public commissioned work. 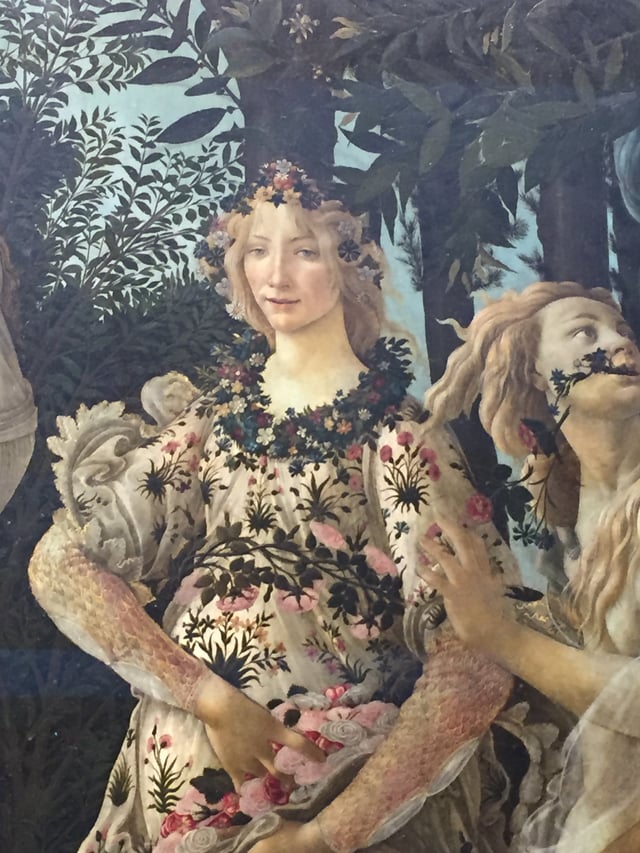 We saw Titian’s Venus of Urbino, a beautiful reclining woman. Even though the painting is called Venus it depicts a newly-wed wife in the nude, which was radical during the period it was drawn.

Half way through the museum, I almost passed out from all the walking. Luckily there was a cafe inside where we had a short break, but it was really expensive. I was happy that I got to rest but the apple pie I got from the cafe wasn't even good. If you are going to the Museum, bring your own water bottle and a little snack (like gummy bears) because you'll regret buying food from this cafe. They even make you pay for sitting at the table! 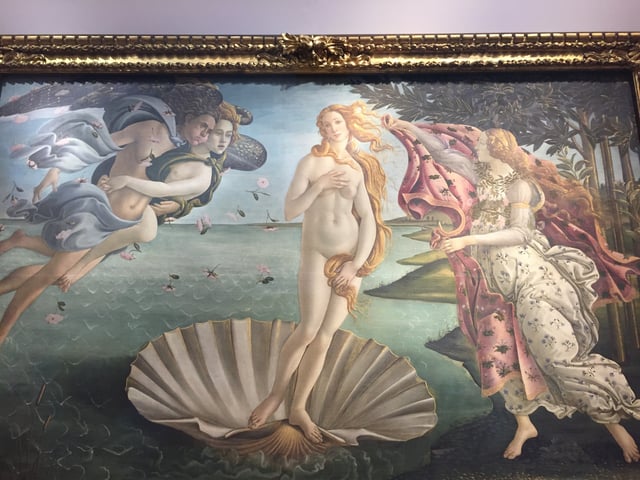 After recharging and getting my strength back, we moved to later periods of art work, in the style of mannerism. I don’t like mannerism art because I find it to be an unnatural depiction of bodies. We saw some Raphael’s work (his famous self portrait!), Rosso’s, and more.

The most famous work we saw in here was Parmigianino’s Madonna with a long neck (or Madonna of the beautiful feet). I thought it was eerie when I saw it online but It was creepier in person. Her long neck and weird proportion of her body, unnaturally long and blue body of baby Jesus (Apparently It was foreshadowing his death and imply ‘Pieta’) The use of cold color, it ran a chill behind my back. This piece is unfinished because Parmigianino died before he could finish it. I think If he did finish it he would have been called heretic by the church for depicting the holy family so monstrously.

After the class was over I also went to see baroque art by Cavaggio and I saw my favorite art ‘Judith Slaying Holofernes’ by Artemisa Gentileschi. 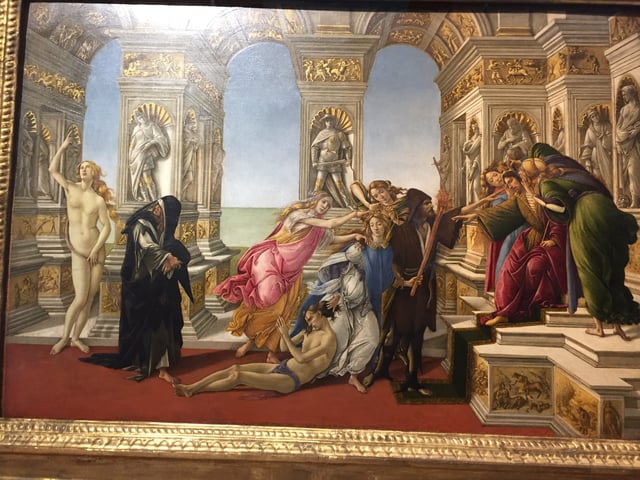 It was the happiest moment I've had in Italy. When I reached the end I didn't want to leave, so I went around the whole museum one more time.

I went in for free this time because it was a class trip but I’m planning on going back again. The ticket price is 6 euro for adult and 4 euro more for reservation. I recommend reserving tickets because you'll have to wait an hour in line to get in if you don’t!