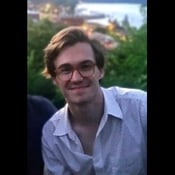 Spence Hood is an official CAPA blogger for fall 2016, sharing his story in weekly posts on CAPA World. A computer science major at the University of Colorado (Boulder), he is studying abroad in Florence this semester.

In this week's post, Spence takes us to Ristorante Buca Mario for some fine dining for you foodies heading to Florence.

Alright folks, I’ve got a fun topic for you this week - fine dining in Florence.  Something I’m sure to miss once I’m stateside again is the phenomenon of ubiquitously good food in this city. Whereas in the US it seems there are select favorite restaurants in a town and then a sizeable list of those not so favorite ones that shall not be named, if you wander into a random cafe or trattoria in Florence, you’ve got about an 80% chance of being served something terrific. It’s just the way things are done here - use the right ingredients the right way, add an unparalleled love for cooking that glows in the eyes of chefs and grandmothers and husbands and wives alike, and things fall right into place. 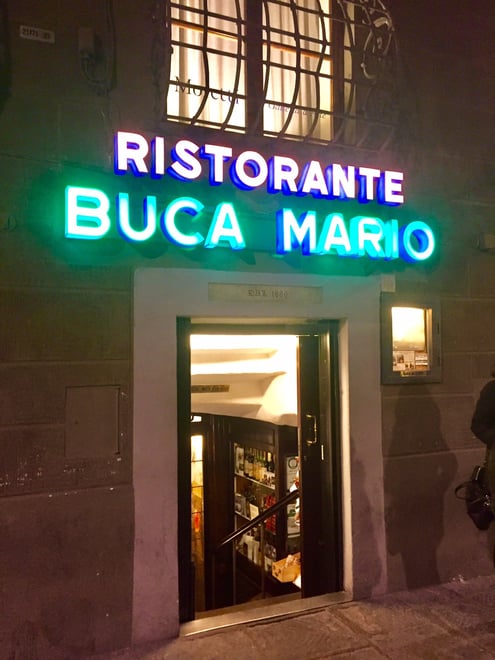 That being said, some things are (of course) priced high for a reason. While my €5 paninos for lunch are downright radical, they can’t compare to the dinner I had last Thursday night at Buca Mario - a petite, classy-as-ever restaurant near Santa Maria Novella. Descending down a tiny staircase into the restaurant (“buca” means “hole” in Italian), we were greeted by a smiling hostess and two waiters in tuxedos, all asking worriedly if we were too cold out there and would like to be seated by a heater. They led us through several small dining areas, each warmly lit by candle and filled with soft chatter between restful-looking customers, to our small table in the back. CAPA graciously gave us bloggers a little money to help fuel these posts, so we were prepared to go all out on a full Italian meal that night which, while traditional, could feed a family of four horses.

After being served bread and oil and ordering our drinks, first off was the starter: sliced pecorino cheese with apple and honey. Pecorino is a very popular cheese in Italy and particularly Florence, made from sheep’s milk in the Tuscan countryside. It’s sharp like cheddar, but the texture is softer like swiss - my new favorite cheese of all time (which is something I never really thought I’d have…). The honey here is also different from back home, as it’s a little nuttier and less sweet. And as far as bread goes, Italians take a rather unconventional approach. It’s usually served cold and is truly flavourless, but there’s a reason for that; it’s meant to be nothing more than a vessel for the prized olive oil. Pressed very recently before making it to our table no doubt, the stuff here was a murky, lime green color and absolutely packed with that wonderful, pungent flavor. Florentines take serious pride in their olive oil here, putting it in everything, from salads to meat to gelato and beyond. At this point in the meal, we’re already starting to fill up. Uh oh. 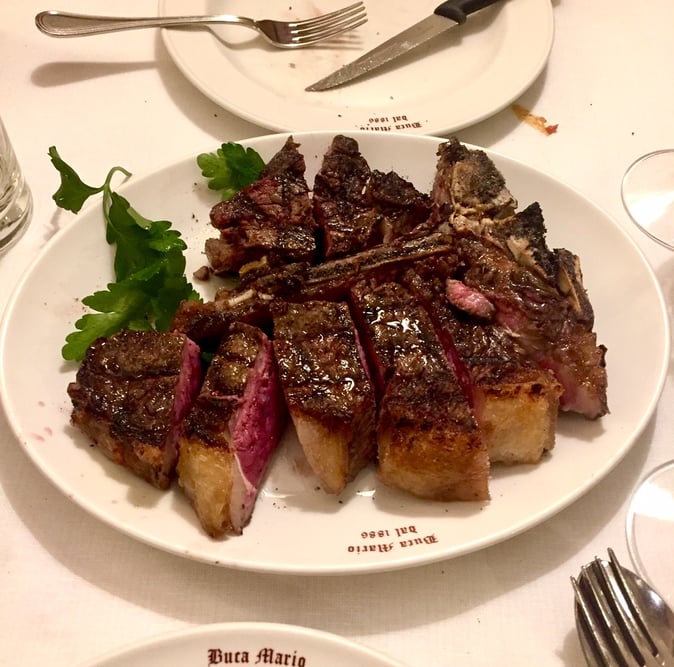 The staff at Buca Mario are thoughtful enough to give you 10 or 15 minutes between plates to help the digestive process get started, and after that intermission the main dish was served. Mind you, I’m not a serious meat-eater by any stretch, and have played with the idea of vegetarianism for a long while now, but there was one plate I’d seen people drool over just thinking about all semester that I couldn’t justly leave this place without trying - La Bistecca Fiorentina (Florentine Steak). I know very little when it comes to talking about beef, but this was good. Like, real good. It was a solid two inches thick, soft and juicy. There are allegedly a number of strict boxes a cut of meat must check off to be awarded the name Florentine Steak, so it wasn’t cheap, but it was a beautifully heavy main event in this performance of an evening. Needless to say the 10 minute break after that monster turned into 30 minutes real quick, and this was no bother at all to the waiter. Meals can last three or four hours sometimes in Italy, as food and togetherness are at the heart of the country’s culture, so once you land a table in a restaurant, it’s essentially yours until closing time. 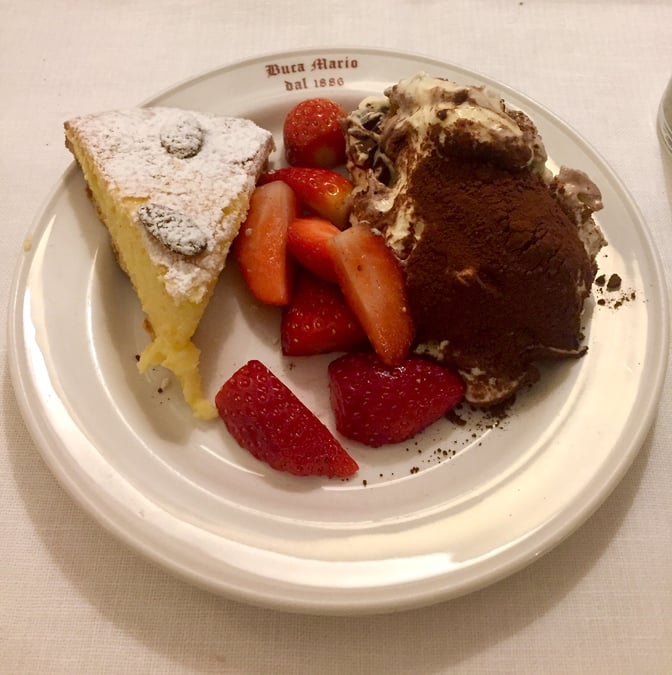 For dessert, a small silver cart was wheeled out next to our table with a decorative display of tarts and fruits and the like. The waiter kindly humored my indecisiveness and gave me half portions of Torta della Nonna and Tiramisu, while my date took Berries and Cream. The dishes were mostly surprisingly light, and packed less of a punch than anything else we’d eaten that night. I suppose this is to help customers end the evening on a simpler note. The Tiramisu, however, was an exception. What’s interesting about this dish is that it can be served in a number of vastly different forms all across Italy, depending on the chef’s preference. I’ve eaten it as a dessert soup, with coffee pudding and ladyfingers on top, I’ve eaten it like a pie with a harder crust and a thick, chocolatey coffee filling, and several other ways. At Buca Mario, Tiramisu comes out as a fluffy cake topped with a thick layer of coffee-flavoured whipped cream. Dang this stuff was dangerous. After we cleaned our plates, the night ended with some coffee and a complimentary double shot of Limoncello each, supposedly to help the digestion process (between you and me I think it’s more of a way of loosening a guy’s grip on his wallet just before tipping-time, but I wasn’t complaining). 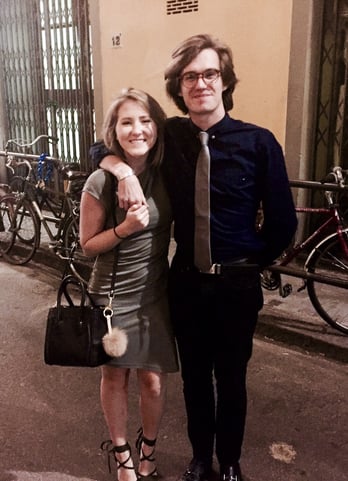 The entire evening was filled with overwhelmingly welcoming staff in an elegant and tranquil ambiance. This certainly isn’t the type of restaurant one goes to weekly, but it makes for a magical glimpse into the finest that Florentine cuisine has to offer every now and then. Of course, no meal like this is complete with a lovely girl to share it with, so I want to thank Lauren for coming as my date. Though it likely won’t be anytime soon, I hope to come back to Buca Mario someday with another empty stomach and open mind.