Get to Know the MTeam and Why CAPA Cares

In a previous post, we shared why CAPA believes in giving back and how that has served as our organization's guiding force. Today, we look at one of CAPA's designated charities—the MTeam for Best Buddies International—and share the beacon of inspiration that motivates us to work toward inclusion for people with intellectual and developmental disabilities. 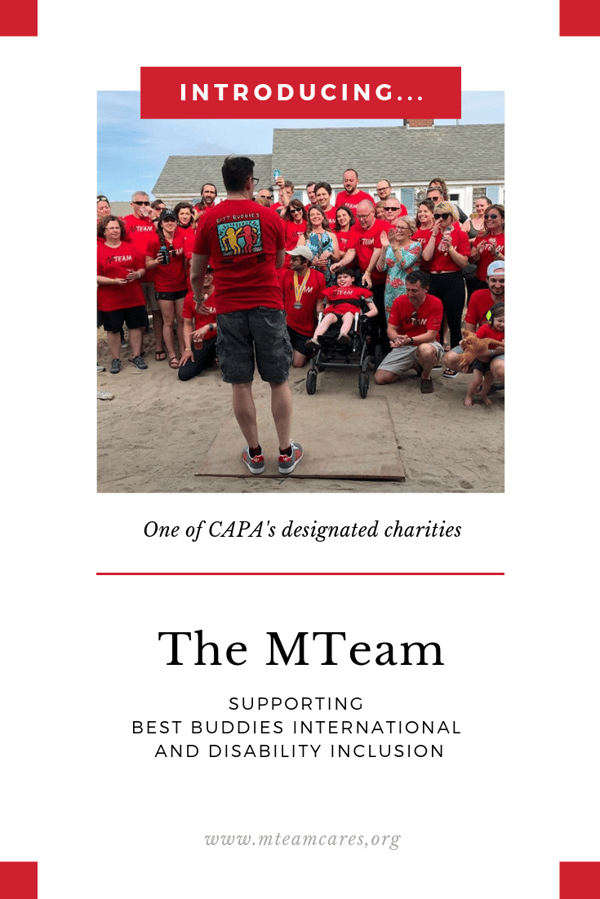 Greg Lewis was a Senior Customized Program Developer at CAPA and had been with us for 10 years. While he tirelessly built up exciting customized programs for our study abroad students, his sense of humor, constant jokes, and positive attitude never failed to brighten our days in the office.

It’s no wonder his nearly 11-year-old daughter Meredith is also so full of light and never hesitant to share a smile. 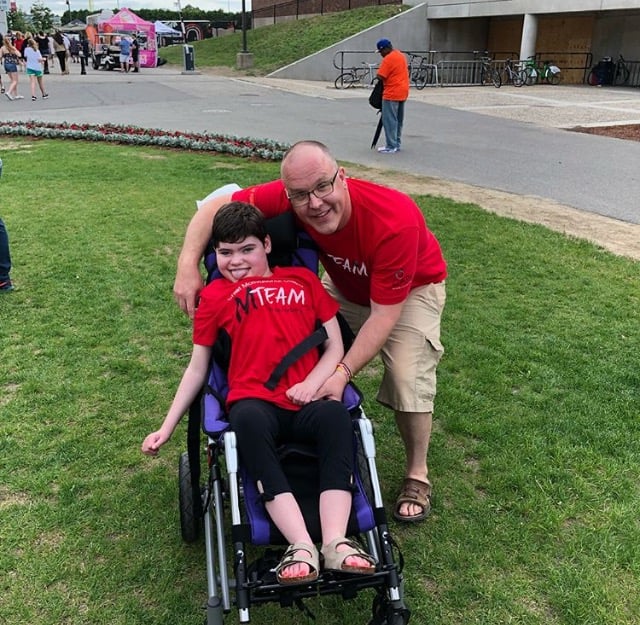 Meredith with her dad Greg.

While their personalities are certainly similar, Meredith’s future will be very different from her dad’s.

Meredith was born with a rare neurodevelopmental disorder called FOXG1 Syndrome. FOXG1 is characterized by seizures, inability to control body movements, lack of speech, and visual impairments. Meredith cannot walk or talk and is unable to use her body with purpose (no pointing or self-feeding). She has low muscle tone and wears a brace around her torso to help prevent scoliosis and ankle supports (AFOs) to school each day to provide support while standing in her stander. She recently had a G-tube (feeding tube) placed that her parents use primarily to administer medication and give extra hydration since drinking water is difficult for her.

Only about 400 people worldwide are diagnosed with FOXG1.

CAPA’s CEO and President John Christian was touched by Meredith’s story and enamored by this little girl who could melt your heart in an instant with the warmth of her smile. He wanted to do something for her and her family.

“I saw how difficult it can be to be a family and care for a child with an intellectual or developmental disability,” he said. “I wanted to find a way to help and realized that I could set up a Best Buddies Challenge team in support of Meredith and FOXG1”.

And so, the MTeam was born. “M”, of course, stands for Meredith. She’s since been adorned with the title Chief Motivating Officer and is a beacon of inspiration for this growing community of cyclists and runners that includes many CAPA staff members, and members of the community here in Boston, and even beyond as far as the state of Georgia and the UK. 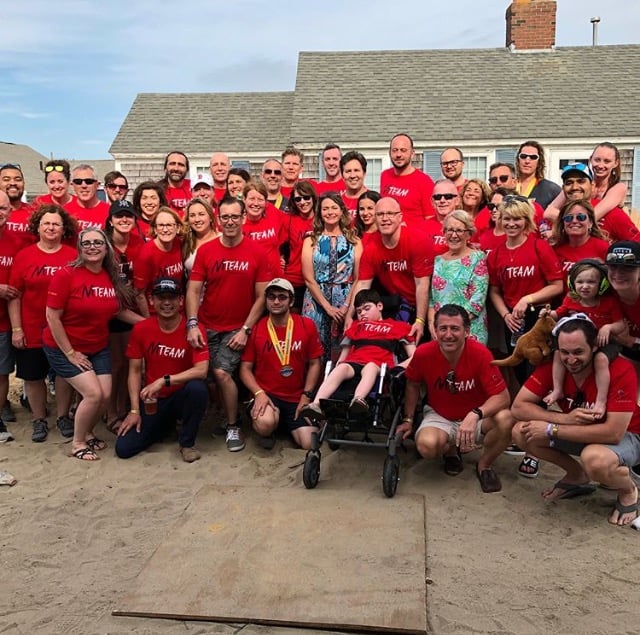 The MTeam group of participants and supporters.

The MTeam supports Best Buddies International through fundraising each year. Every summer, the team participates in an event called the Best Buddies Challenge: a 20-, 50-, or 100-mile cycle race or a 5k run or walk.

In 2016, the MTeam had six members and raised $11,500.00 In 2018, we had 33 members and raised $125,000. This year we have nearly 60 members and hope to raise $250,000. All funds collected go straight to the efforts of Best Buddies as they work toward a world that is more inclusive for people who have intellectual and developmental disabilities. They have four pillars of work: integrated employment, leadership development, friendships, and integrated living.

But the story is bigger than that.

In 2018, the MTeam spent $5,000 on a piece of technology for Meredith’s school that would revolutionize the way she and her classmates are able to communicate. 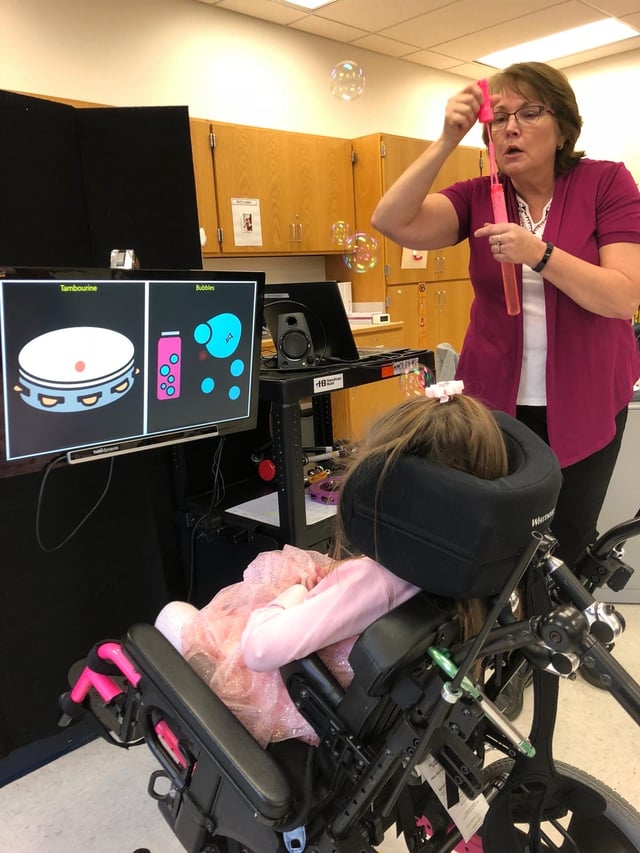 The technology she now has access to, and is learning to use every day, is called a Tobii Dynavox PCEye Plus. This piece of assistive technology allows Meredith to use her eye movements to select words or images on a screen.

Just recently, Meredith painted her first picture, with her eyes. And of course, it is now framed and hung proudly on the wall in her home. Just recently, she was able to communicate to her teacher, by using her eyes, that she was thirsty, and she proceeded to drink a lot of water. These are things her parents once thought impossible. Look out for this year’s running and riding event wear, as Meredith’s painting is the inspiration for our design. 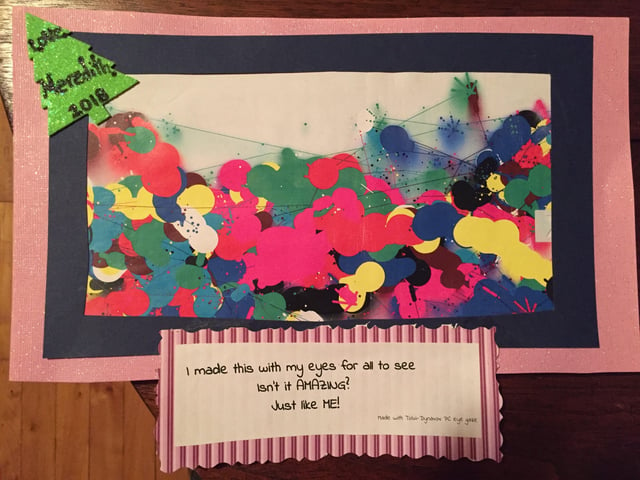 “It is very unsettling to be the parents of a child with a disease that the medical community knows so little about,” Greg said. “Teaming up with Best Buddies has increased awareness of FOXG1 and has provided countless opportunities for inclusion and friendship for Meredith. It's helped us feel part of a larger community and shown us that Meredith's diagnosis doesn't define her. We love showing Meredith that even though she is differently-abled, with the right support, she has many opportunities to experience all that life has to offer.” 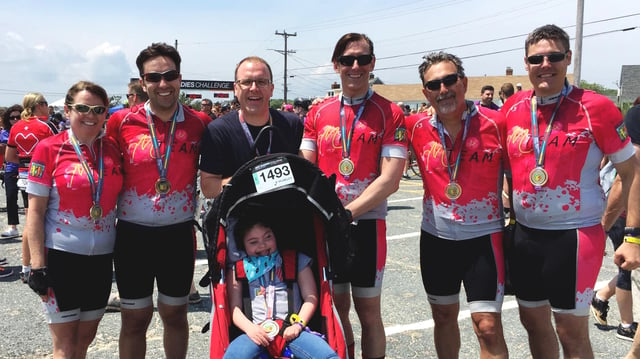 Join the MTeam this June for the Best Buddies Challenge!

In June, you’ll find the MTeam, now more than 60 strong, running and cycling once again in this year’s Best Buddies Challenge. Meredith’s parents will be running along, as always, with Meredith in her running chair, sharing her generous smiles, more able and aware than she has ever been before, motivating the team toward our $250,000 goal for 2019.

CAPA is the MTeam’s biggest sponsor, and our staff are very supportive of this initiative. If you’d like to learn more about the MTeam or how you can get involved, visit mteamcares.org.