Getting Out of London to Greater England

In this week's post, Thaddeus explores cities and towns outside of London and visits William Shakespeare's childhood home and grave.

I have had the opportunity to travel a bit more outside of London to the greater parts of the U.K. such as Bath, Brighton, Stratford Upon Avon, and Oxford—both through CAPA and my own interest! 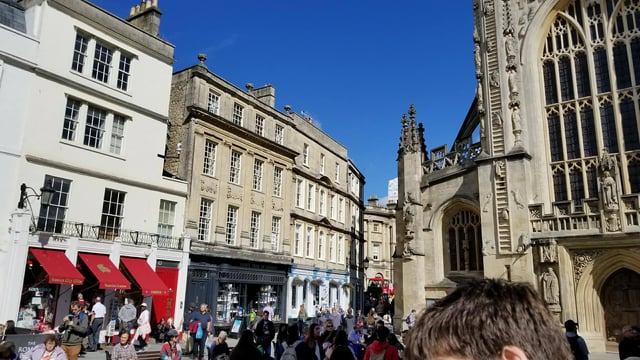 Getting to explore greater England has been a very interesting way to experience U.K. culture and the less fast-paced urban life. These areas are also deeply rich with history that dates back to monumental eras of human cultural heritage.

The town of Bath gave me a very insightful window into a more remote residential lifestyle that reminded me of a comfortable American midwestern way of living. I was surprised that I felt comfortable so quickly by just exploring the town. The architecture and display of respect for the history of the town was a very welcoming way to feel like a part of the community of the town, even if you are just a visitor.

Brighton was an extremely beautiful town to explore, especially along the coastline. The winding streets and lanes give the town a delightful form of walkability. Brighton also houses a really wonderful town museum and library, which houses a very interesting global performance and tradition exhibit that I spent a good amount of time exploring. It was rather odd to find artifacts of that global theatrical culture in that area! This is also true of the Royal Pavilion next to the museum. The pavilion itself is a really marvelous architectural wonder—taking a lot of inspiration from East Asian architecture.

Stratford Upon Avon is a town that is closely tied to my education with classical texts since it is the birthplace and resting place of William Shakespeare. During my time there I was sure to see his childhood home as well as his grave.

Visiting his grave at the Church of the Holy Trinity was almost liberating for me. As I have been working on his texts as early as my second year of training, Shakespeare's works have always been something I held to the high regard and to a standard of theatricality to my work.

However as I stood over his resting spot, I felt as though all of his notoriety and fame disappeared, and he was resting on the ground like many have before him. He just became another person, no more no less. And with this thought, all of the intimidation behind working on his plays suddenly disappeared for me.

He was an actor as well, and at the time, he was just writing from his heart. I think that's what can sometimes be missing in those that tell his stories. They need heart. I could learn all the technique I could want about approaching his texts, but if it doesn't have any heart to go along with it in the work, his story dies.

Yes. All of these thoughts because of a gravestone.

I think I have a new found way of looking at Shakespeare's texts because of that visit. I'm not so afraid or worried about getting it right anymore. I just have to give his stories generosity, and my heart.

The history and lifestyles of these towns have given me a very well-rounded perspective on the dynamic civilian worlds of greater England. It has been a very validating study abroad experience so far, because of these trips!