In this week's post, Genevieve breaks away from her routine in the city and celebrates with locals at a traditional UK event: Guys Fawkes Day. Learn about the significance of Guy Fawkes Day and what happens at the local events annually!

Eventually in a big city, the buildings start to crowd out the sky, trapping pedestrians in a bubble of industry. Everything looks manmade and nature feels distant. The cold wind rushes down streets, like a river in a well-worn channel. It makes coats flap and faces turn red. The city begins to feel harsh and cold. Its character is lost in the interminable rotation of the same days, the same patterns. Even abroad, routine makes what was exciting long and dull. But in those moments, when home feels far away and the excitement of the coming holidays makes it feel even farther, I have made some of the most enchanting discoveries of my experience abroad.

The need to escape the city and the constant routine that it creates feels overwhelming at times. It mixes with the knowledge that being at home was so long ago.

A peaceful side street somewhere in Kensington and Chelsea.

This escape can look like something different for every person, but for me it came by changing my routine. The rest of the UK decided to come with me in this change, since almost overnight everything is decorated for Christmas. I found that change through getting away from buildings for a while. I went for a lovely walk in Hyde Park. I popped in my headphones and listened to a podcast while I walked around the enormous park. The changing leaves that I had been craving while trapped in the grey streets were abundant and so colorful. They dressed the sky with bright yellows, reds, and leftover greens. My escape from the crowded streets provided a much-needed escape into nature, but I didn’t want to stop there.

I decided to further break up my routine by attending a traditional UK holiday event that marks the changing of the season. I can only describe it as a mix of Halloween and Thanksgiving. Some people were dressed up and there were scary themes throughout the celebrations, but the next day Christmas music was everywhere. The holiday is called Bonfire Night or Guy Fawkes Day on November 5. The holiday celebrates the failed assassination of King James I, a Scottish king of the UK. In 1605, Guy Fawkes and a Catholic priest planned to blow up Parliament and the Protestant King; however, they were stopped before they could carry out their plans. To commemorate the day, people from all over the UK gather to light bonfires—a straw effigy of Guy Fawkes used to be burned on them—and set off fireworks. It is called Bonfire Night, and many people don’t even know what it is celebrating anymore. This failed assassination attempt has had a great effect on history, and is arguably part of the inspiration for one of my favorite Shakespeare plays, Macbeth. 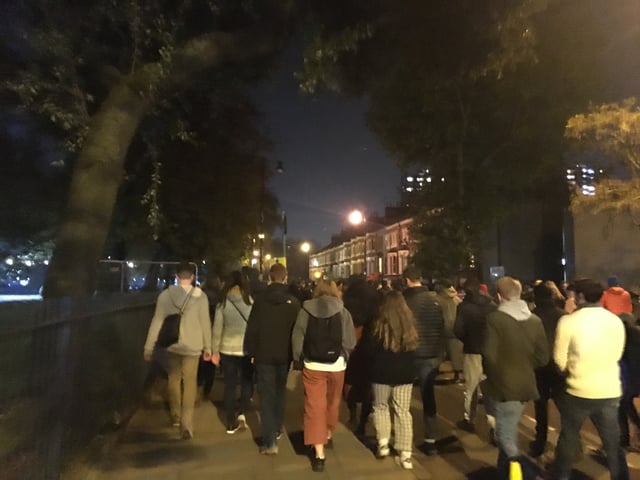 The crowds in London always jump at FREE events.

On this night and the days leading up to it, the UK joins in a nationwide series of fun fairs, bonfires, and firework shows. Ever since learning about Guy Fawkes’ influence in Macbeth, I have wanted to go to one of these celebrations. The trick was finding a free one, since I am still a college student on limited funds. I managed to find a free firework display that is not only marking Bonfire night, but is drawing from another one of my favorite novels, Frankenstein, which is celebrating its 200-year birthday. A friend of mine and I journeyed all of 50 minutes to a park in East London. The park was full of families, young people, and even some grandparents. There were food stalls on the edge of the park, but the main event was through the grass area towards a giant metal Frankenstein’s monster head hanging from a crane. The firework show began at 7:15 and marks my favorite fireworks show to date.

They began with darkness and then a booming voice reading from Frankenstein. The eerie voice repeated passages on light and sound, punctuated with the explosions of fireworks in the shape of hearts, bursts, and glitter showers. The show lasted 20 minutes and culminated with the giant head exploding in flames. It honored the essence of Frankenstein while drawing from modern perspectives on the monster theme and sound clips from the various movies. The fireworks, sparklers, and exciting environment was the perfect way to assuage my need for something new. 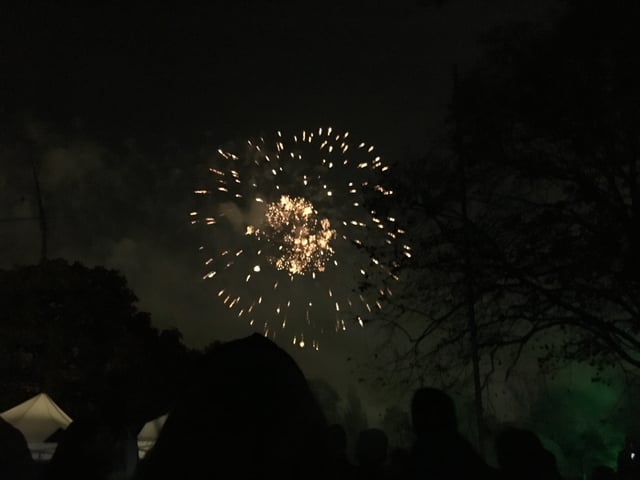 The fireworks filled the dark sky with glittery sparks.

The change in seasons from Fall to Winter is coming and that was clearly accentuated with the beauty of parks throughout London. The store fronts are even showing their support of the change in seasons. While routine can make any experience feel repetitive and slow, there are a never-ending list of ways to find entertainment in a city like London.