In this month's column, Dr. Mike Woolf shares his thoughts on global education in a virtual space and discusses the evolution of technology that has made online learning possible.

I am aware that this title is ambiguous. I have brought you here under a false pretence. I have no experience of aspiring to love online, or of dating agencies found there, and I do not intend to rectify that omission. I thought, however, that nobody would read anything of mine that related to technology. It is not my field. Hence this rather shabby tactic to try to seduce you into reading this.

A little explanation is called for. I struggle with complex technologies (that includes everything invented since the fountain pen.) Not as badly as this perhaps: 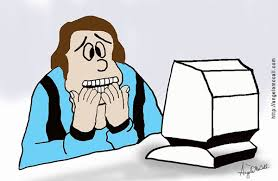 But I do not exude confidence. Our estimable technology helpline people have a significant dossier of my confusions and “user errors.”

So, I am not entirely comfortable with the idea of encountering reality through the filter of technology. That resonates with why I prefer theater to cinema because, if it is happening now, something is liable to go wrong or to go right. There is no way of knowing in advance and there is no way of changing it once it is has happened. In the cinema, by way of contrast you know that what you are watching has been subject to editorial alterations of many and several kinds. Nothing just randomly happens; what you see is always something invented by hand and eye. Cinema enacts the illusion that you can direct and control things. However, both films and plays are constructed approximations of reality; in contrast, after you leave cinema or the curtain falls, you encounter the unpredictable, unmanageable, randomness which may amuse, educate, or disturb.

Film and theater do not, however, claim to be reality but rather to represent something connected to the world. Thus, I struggle with the idea that reality can be “virtual.”  I realize, though, that it has become part of the environment, a collocation or linguistic association as familiar as fish and chips, or study abroad. Nevertheless, it is something of an oxymoron. I have no objection to oxymorons, of course: bitter sweet memories of the teacher who wrote “Don’t use contractions” at the bottom of my history essay: epiphanies that led to the realization that Little Big Man was not a misprint, and the revelation that wars can never really be civil. I have, though, adjusted to the notion of virtual reality and, in our current circumstances, have been converted to the idea that it may be possible to study the nature of abroad in that space. I am something of a convert but nothing of an expert.

I have colleagues at CAPA who have real expertise in, and passion for, teaching and learning online. The rationales and applications are made very clear, for example, in Jessie Gibson’s fine article “Innovative Technology Gives Online Study Abroad Students a Global Experience.” She argues that:

"While they may not be physically abroad, students using Global Networked Learning will still build key skills employers value, including complex problem solving, critical thinking, creativity, collaboration and teamwork, emotional intelligence, negotiation, clear judgment and decision making, and cognitive flexibility. Through this technology, the online study abroad experience will be transformed from an international experience to a global one." [1]

I cannot match Jessie Gibson’s insights but will add a peripheral thought or two. Her article demonstrates the value of online international education beyond the immediate situation. Enhanced technologies have created possibilities of teaching and studying in new ways. Flexible learning timetables can overcome the barriers of time.  Geographical borders are no constraint to participation. More affordable and inclusive trans-national education may be available, for example, to working adults, to athletes constrained by sport obligations, to those other constituencies we have not served as effectively as we might have. In short, online courses may make a mode of international education available to students who, for one reason or another, cannot or will not travel. It is not an answer to every problem. Students with some kinds of learning difficulties or physical disabilities may still face barriers. Good internet connection is not universally available. Nevertheless, it may spread the inclusive net wider and have real impact upon the issue of under-representation in international education.

Online learning may function effectively in a number of contexts: as an enhancement for students while studying abroad; as a form of global education that impacts upon the internalization agenda of campuses within and beyond the USA; as a mechanism to eradicate at least some barriers to participation.

There are other peripheral benefits to students in that it helps demonstrate that technology may have a utility beyond chatting with chums on Facebook, Instagram, Tumblr, TikTok, Twitter, Snapchat etc.[2] Much of our daily working lives is spent on computers. It is possible to do some real research online (I do not just mean Wikipedia). Having students engage with the internet for employment, through virtual internships, and enlightenment, through academically challenging courses, has significant value.

The ability to create education in virtual space is all very new, however. If you are over the age of about 30 you were born in a time when none of this was really feasible.

It is easy to forget that the technologies we rely on to deliver globally networked learning and online teaching are remarkably recent. The first webpage was created in 1991 (a day before yesterday); eBay and Amazon were founded in 1995, Facebook in 2004, YouTube in 2005, Twitter in 2006 (yesterday). A revolution has radically altered most aspects of our lives from work, to recreation, to courtship (as referenced by my title), shopping, communications (in particular), and so on. It is difficult to imagine life without the technologies that have transformed our environments in a very short time. 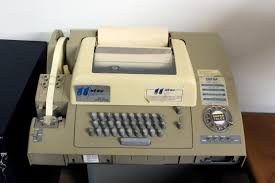 I can demonstrate the impact on communications through personal experience. When I began working in international education written communications were made either by telex or regular mail. Telex was ponderous and pricey. Abbreviations were likely to lead to confusion and misconceptions. I loved letters though; there was a blissful space between request and action. Each technological development has increased the expectation of speed of delivery. Then the fax machine arrived. It represented an enormous advance in efficiency and helped improve relationships with overseas colleagues. It meant that you could personalize your messages, add sweet nothings, ask about the weather. However, I still treasure memories of faxes received from Tokyo. One began “Dear Mike, Further to your outrageous suggestion…” and another “We are bemused by your request for incredible things…” I like to think that the problem was one of translation. Then, of course, e-mail reduced the costs and increased the speed of our communications, as well as being a burden with which many of us struggle; is your burgeoning inbox a permanent reminder of your imperfections?

All of this happened on a mass scale only about 20 years old. Another thing that happened is virtual reality; the space in which we are now able to teach and to learn. 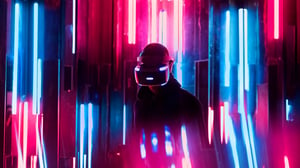 Virtual reality is, of course, a contradiction, a bit like military intelligence. It functions metaphorically to indicate an alternative mode of connection through which we recreate the world outside. In that sense it is not new at all; it is part of a long history of devices through which aspects of the external world are represented and interpreted. In that sense, it approximates the role of art. Online teaching enables students to engage with a selective, edited view of the world invented and managed by someone else. An analogy is the art gallery wherein we might visit a version of Flemish medieval rural life in the paintings of Hieronymus Bosch (c1450 – 1519) or Pieter Brueghel the Elder (1564 – 1636).

Many other media have sought to mimic reality. The novel attempts to create a mediated version of an environment within which readers can engage with people and places previously unknown to them. The purpose of theater, Shakespeare’s Hamlet tell us, is “to hold, as 'twere, the mirror up to nature.” Television and film offer other ways of creating virtual realities in that they often show real people moving in actual environments.

The visual arts, the novel, theater, film and television, and online learning have in common the creation of mediated realities. It is not the same as being there, but it may have real significance. There is not any intrinsic value in the mechanism itself; a novel is not necessarily superior to a play or a film. What matters is the quality of mind that creates pathways into other places. This reminds us that effective online learning is not the same as filming a talking professorial head. At CAPA, we recognize that it is a distinctive pedagogy that has to be crafted and created so that the parts are integrated into a coherent whole.

Online teaching and the creative arts enact similar processes. They enable us to see things from new perspectives: we return to our own environment but perceive it in a manner somewhat altered. At their best, these tools enlighten, educate, and trigger curiosity. Engagement with virtual reality may also inspire students subsequently to cross borders into more distant landscapes beyond the domestic.

Online learning is not study abroad, not “study abroad lite,” [3] but an alternative mode of exploring and analysing worlds beyond the parochial. A key distinction is that in online provision the creator of the materials controls the learning environment; establishes the rules of access (sign on), and conventions of instruction (read, look, write, speak, collaborate). Virtual reality is a constructed medium, an artifice which grants access to the rich diversity of other spaces. We cannot visit all the corners of the globe but to be educated is to at least understand something of the world beyond the borders of inherited identities.

Global education ultimately means two things that are entirely compatible but not necessarily the same: education in the world and education about the world. Our role as international educators, in creating high impact learning, requires us to expose participants to new ideas in new environments. Virtual reality is not the same as being there, but it offers another route towards wisdom and to a re-definition of self.

International education has, at its center, an implicit belief in the benefit of experience. It is innovative and unconventional in that it values a mode of learning that may include, but always goes beyond, the traditional. We dismantle walls and cross borders because we believe that students learn most when surprised, discomforted, and challenged to look both beyond themselves and then, paradoxically, back into themselves. At CAPA, we recognize that there is more than one pathway along which students may travel towards those objectives and seek the wisdom extolled by Mark Twain: “Broad, wholesome, charitable views of men and things cannot be acquired by vegetating in one little corner of the earth all of one’s lifetime.” [4]

[2] I found out about these, of course, on the internet  and discovered to my astonishment that there are 65+ social media apps according to: https://makeawebsitehub.com/social-media-sites/ 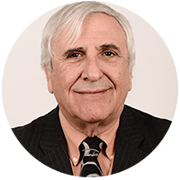 Dr. Mike Woolf is the Deputy President for Strategic Development here at CAPA. His unique role at CAPA takes him around the world to conferences as a frequent presenter and attendee. He serves on a number of boards and committees, including the Curriculum Committee of the Forum on Education Abroad, the Editorial Boards of Frontiers and the Journal of Studies in International Education, EAIE’s Knowledge Development Task Force, and Braun Stiftung für Internationalen Austausch. He has written widely and has published extensively on international education and cultural studies. Most recently, he published work aimed at critically reviewing the core assumptions of study abroad. 'Thoughts on Education Abroad' is a monthly column of short essays sharing his thoughts and expertise on the subject.