London: One of the World's Most Diverse Food Scenes

Today, Chi Vu covers London's food history, Asian food and London's Chinatown, plus cuisine from around the world. Chi was a CAPA London Diversity Advocates Scholar for the fall 2021 semester, in addition to being an official blogger/vlogger.

London is hailed as one of the best, most diverse food scenes in the world.

This global city offers more than 89 national cuisines including Chinese, Vietnamese, Indian, Sri Lankan, Malaysian, Yemeni, Afghani, Austrian, Australian, French, Italian, German, American, Mexican, Scandinavian, Burmese , etc. food. Insider ranked London as the second best foodie city in the world in 2018. The Evening Standard also mentioned that the main reason why London had one of the most diverse food scenes in the world was because Londoners had been open to food from different cultures and regions around the world. 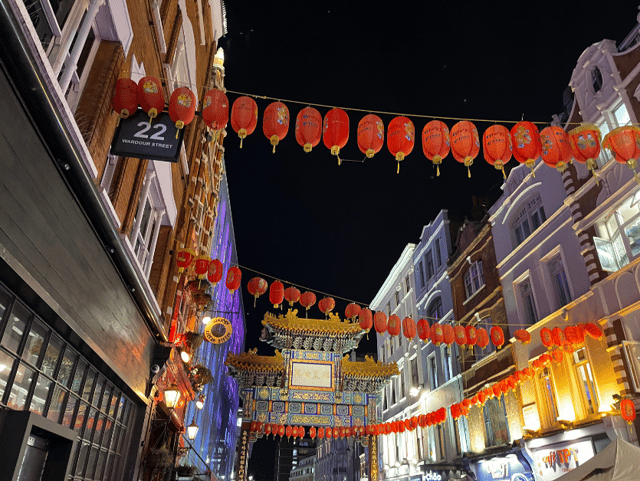 According to The Culture Trip, London Chinatown has existed since the early 20th century in the West End and became famous thanks to its picturesque pagoda architecture and lantern-lined streets with various food stores next to each other. Compared to Chinatown in Chicago with many Korean restaurants and K-pop stores, Chinatown in London, in my perspective, is more Chinese-centric and offers many of its cultural activities and images. Due to the trade between the U.K. and China in the 17th century, Chinese pottery, architecture, and tea became renowned and favorable among Britain's elite. It became one of the first factors for the foundation of Chinatown. Although in the past, Chinatown was considered as a place of "gambling houses and opium dens", later, Chinatown became and is still a major culinary destination in London. Chinatown is a unique contribution to the identity of London!

Places for Students to Visit in Chinatown 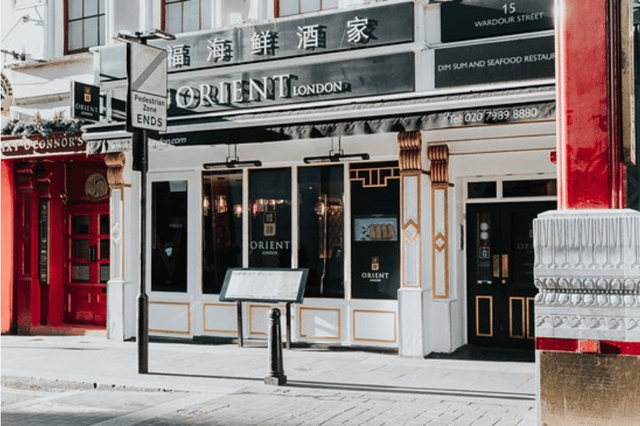 Orient has been one of the busiest restaurants in Chinatown with traditional dim sum, crispy duck, fried rice, jasmine tea, or buns, etc. If you have a chance to visit this place, you should try out Vietnamese spring rolls and hot jasmine tea! You won't regret it! Orient London is located at 15 Wardour Street London W1D 6PH. You can read more about the story behind Orient's Chinese traditional food such as Dim Sum on Orient's website. 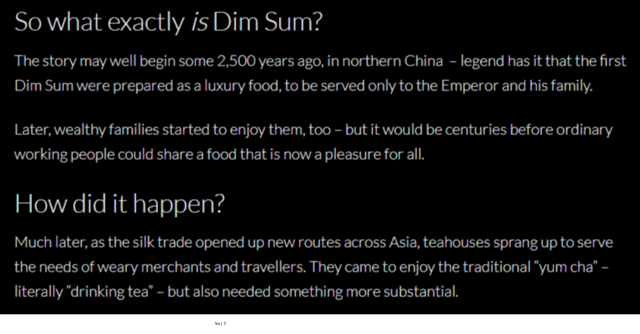 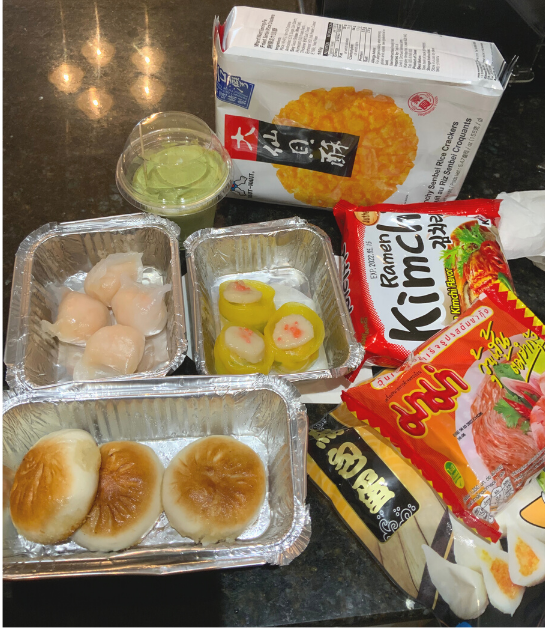 Food from Asian supermarkets in Chinatown.

If visiting restaurants costs you too much money, buying food from supermarkets to cook at home can save you lots of money and make you feel like home. These are some Asian stores that I normally visit to buy food. All the information was drawn from Chinatown's website: Loon Fung Supermarket: located at 42-44 Gerrard St, London W1D 5QG. Loon Fung supermarket has been at the forefront of Chinatown’s Asian food scene for over 50 years. More importantly, "Loon Fung is indeed acclaimed as one of the 'Big Four' Chinese supermarkets in the UK. Their stock is imported from various Asian countries, including mainland China, Hong Kong, Taiwan, the Philippines, Thailand, Malaysia, Vietnam, Japan and Korea". New Loon Moon Supermarket: located at 9A Gerrard St, London W1D 5PN. New Loon Moon was the first oriental store in the area with over 4,000 types of Southeast Asian food!

If you are looking for a decent price Chinese restaurant in Chinatown, New China is the place that you should visit. New China restaurant: located at 48 Gerrard St. London China town W1D 5QL. With the structure of a traditional Chinese pagoda, New China completely stands out in the corner of Gerrard street! The food ranges from indigenous to different regions across mainland China such as chilly boiled fished, hot pot, dim sum, seafood noodles, sour Chinese cabbage, glass noodles, or baked clams, etc. New China also offers karaoke room if you want to experience Asian karaoke! 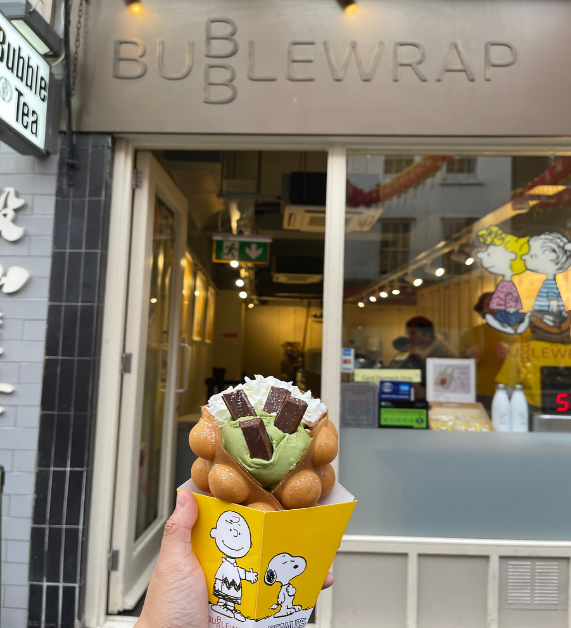 Bubble Wrap is a handheld waffle cones filled with gelato & toppings. This is one of the Hong Kong’s most popular street snacks – egg-shaped waffles!

The bubble waffle is unlike traditional western square flat ones, instead it’s hexagonal shaped and covered in spherical pockets of batter. The egg waffle actually dates back to the 1950s when canny market traders created the ovular-shaped waffle machine to use up all their broken eggs. Fast-forward to today and it’s become one of the most Insta-worthy snacks around.

Other Places in London to Find Asian Food 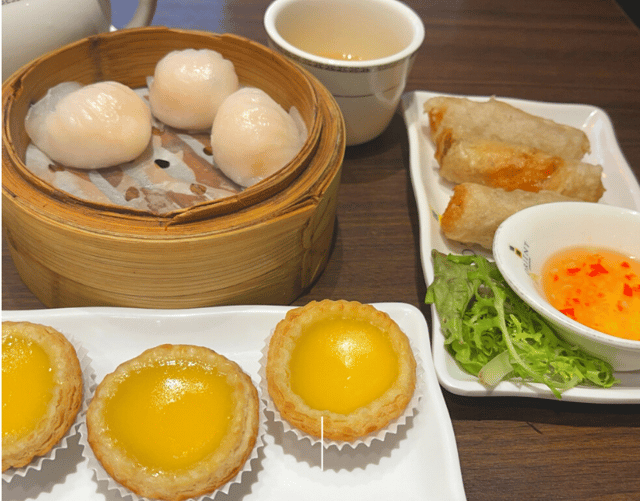 Located in Camden Town, Camden Market is one of the world’s most famous markets. Camden Market offers a diversity of food ranging from Mexico, Thailand, Vietnam, to France. You can also find many beautiful and meaningful souvenirs in this market at a cheap price. Did you know? Famous singer and Camdenite, Amy Winehouse worked on a stall in Camden Lock Market when she was a teenager! 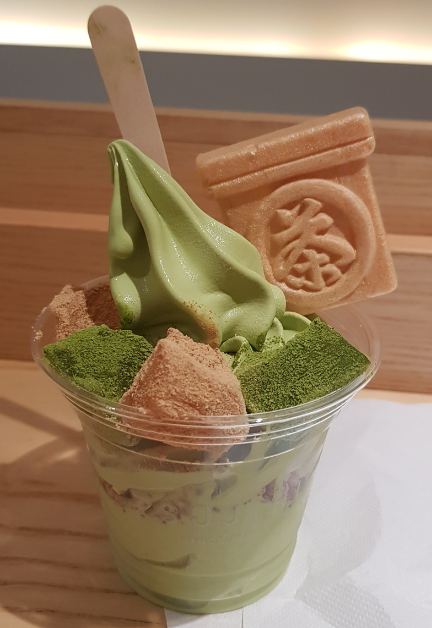 TSUJIRI has many stores in London, and the matcha here is really authentic. TSUJIRI is considered as one of the best matcha ice cream place in London on Google reviews and Tripadvisor! Try out the ice cream as well as matcha latter or matcha boba here, you won't regret it!

Places in London to Find Good Food From Around the World

Nando's is a South African fast food chain that offers peri-peri style chicken. According to Nando's website, "the Nando’s story started centuries ago, when the Portuguese explorers set sail for the East". Founded by Fernando Duarte and Robbie Brozin in 1987, Nando's has expanded its outlets to many countries around the world.

Christmas by the River (Seasonal)

Christmas by the River is located along the banks of the Thames. You just need to get off London Bridge station and walk for about six or seven minutes to get there. Christmas by the River offers delicious homemade macarons, German hot dogs, Thai food, Belgium hot chocolate, Indian food, and drink stalls with stunning views of Tower Bridge. 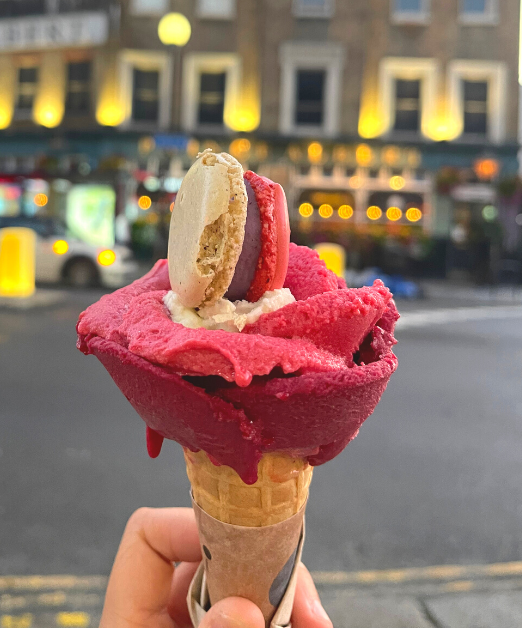 Covent Garden is shopping and entertainment hub in London's West End. Covent Garden has Apple Market where you can find Belgium chocolate, British tea, German food, French pastries, Italian wine, Chinese buns, etc. You can find foods from different continents of the world in Covent Garden! Covent Garden is also famous for Christmas decorations and musical-related themes such as Frozen! Notting Hill is universally famous thanks to the film with the same name 'Notting Hill'. However, Notting Hill is more than just about a place where that movie was filmed. Notting Hill has Portobello Market where cheap and organic food as well as clothes are sold. You can find curry, paella, fish and chips, bratwurst, and more here!! Amorino Gelato has stores everywhere in London, but I specifically love visiting Amorino in Notting Hill. 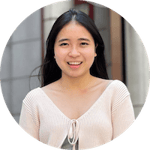 Chi Vu was an official CAPA blogger for fall 2021, sharing her story in frequent posts on CAPA World. A business administration (marketing) and communication studies major at Augustana College, she studied abroad in London last semester.