Magic, Museums, and Trampolines: A Weekend of Fun in London (On a Budget!)

James is here with a fun-fulled blog post from London, where he visits the theatre, the Tate Modern, a trampoline park, and more... all on a budget! Read more to find out what else he's been up to during his free time in London.

London is a stunning, lively city, packed to the brim with all kinds of different activities and events – the sheer number of opportunities available everyday means living here is as exciting as it is overwhelming. I’ve spent my fair share of time scrolling endlessly through Time Out London, looking for the perfect way to spend a night or a weekend afternoon: my ideal event is thrilling but not expensive, adventurous but not dangerous, ambitious but not impossible, and often, as I’ve now come to realize, does not exist. One of my favorite weekends here so far was almost entirely a result of impulsive decision-making and luck. I kept saying ‘yes’ to my friends’ crazy ideas, and it led to a weekend full of memorable (and inexpensive!) evenings spent seeing theater, art, or climbing through a cavernous tunnel system within a trampoline park – but more on that later. The whole experience taught me a valuable lesson to stop overplanning, stop waiting for the perfect evening to emerge out of nowhere, and trust that a good time can be achieved without a lot of money. 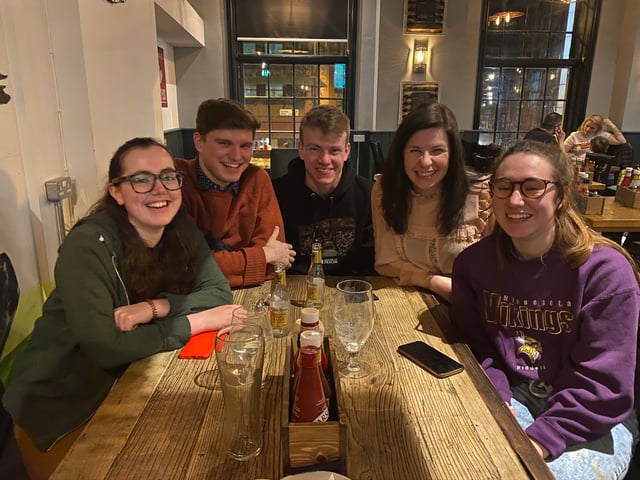 Thursday night dinner at O’Neills, a classic London pub chain, with friends from all over the world! This fun evening would kick off a whole crazy weekend of activities. I recommend the Steak & Guinness Pie, one of their classic meals which also happens to be both cheap and delicious.

I’m still not sure how it happened, but I was somehow lucky enough to win the TodayTix virtual lottery for tickets to see London’s most popular play, Harry Potter and the Cursed Child. I hope to write a whole blog on finding the best deals for theater in London, but my biggest recommendation for the theater-lover is to download the TodayTix app – it is the tool I use most often to buy theater tickets in the city, and is full of last-minute cheap rush tickets and lotteries.

Because Harry Potter is such a popular show, tickets are prohibitively expensive on a student budget outside of the lottery tickets they reserve for forty lucky winners. So many people enter every week that I never really expected to win – so it was with immense surprise that I glanced down at my phone on a chilly Wednesday afternoon and a small notification informs me that I’d done just that. Almost shaking with excitement, I booked the tickets immediately, and invited a friend to join me. At only 20 pounds for some of the best seats in the house, it was a deal I couldn’t pass up. 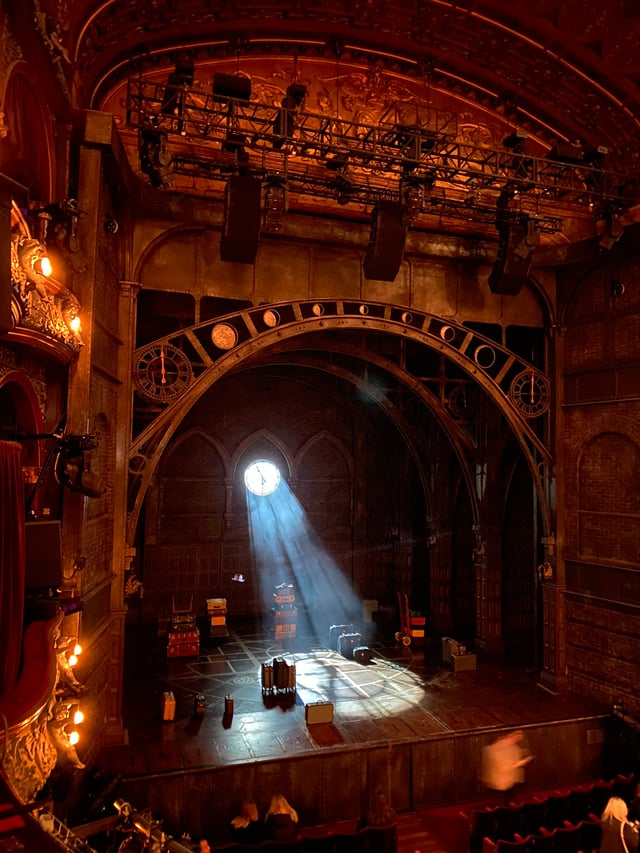 Here’s the view from our seats! This was the way the stage looked at the beginning of the five-hour show, which was broken up into two two-and-a-half-hour parts.

The play was incredible, to say the least: the world was engrossing, the magic felt real, and a custom music score played throughout the show that enhanced each scene with a unique and whimsical energy. The first half of the show whizzed by, giving us time to grab some dinner before seeing Part II. We went to Kiln, a gem hidden in Soho with inexpensive and incredibly delicious Thai food served on the counter right in front of you. Service is quick and the food is amazing, but get there early to avoid the queue that quickly forms out the door and down the block. 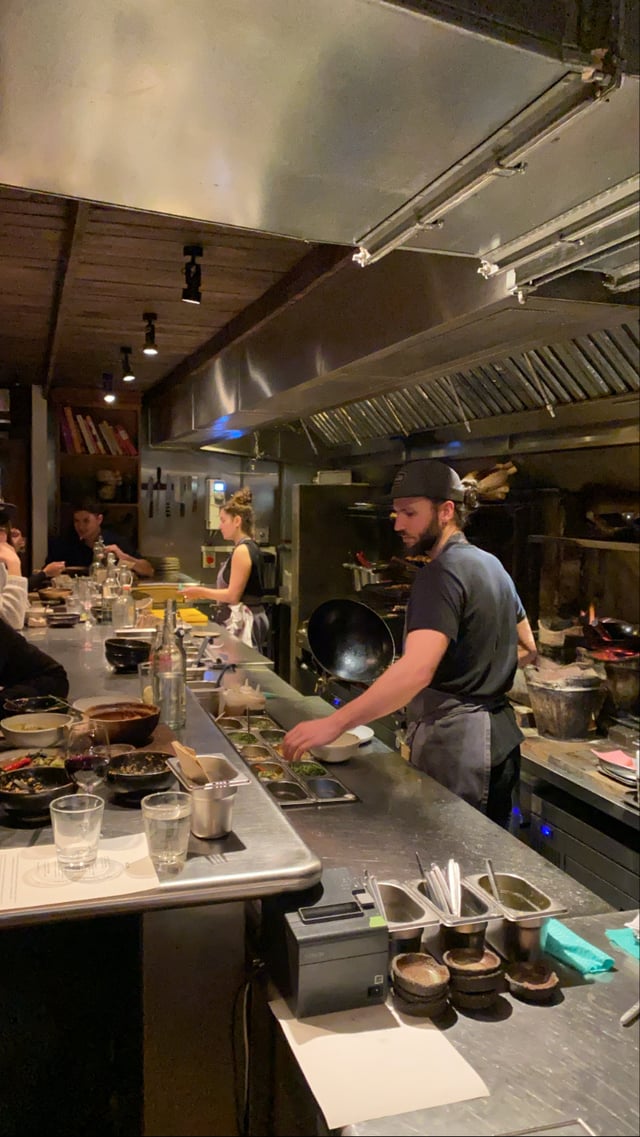 The aroma of the meats and spices cooking at Kiln makes the visit well worth it, even without the fact that it’s all so cheap.

The following day, one of my friends suggested we go to the Tate Modern, one of the city’s most famous modern art museums. I was hesitant, because I knew museums could be expensive (I could not help but think of the Guggenheim or the Moma in New York City, for which student admission is a significant cost). As my friend soon told me, however, many of Tate’s permanent exhibitions are entirely free and open to the public, so I joined her at Borough Market, grabbed a donut, and walked along the Thames on our way to the museum. 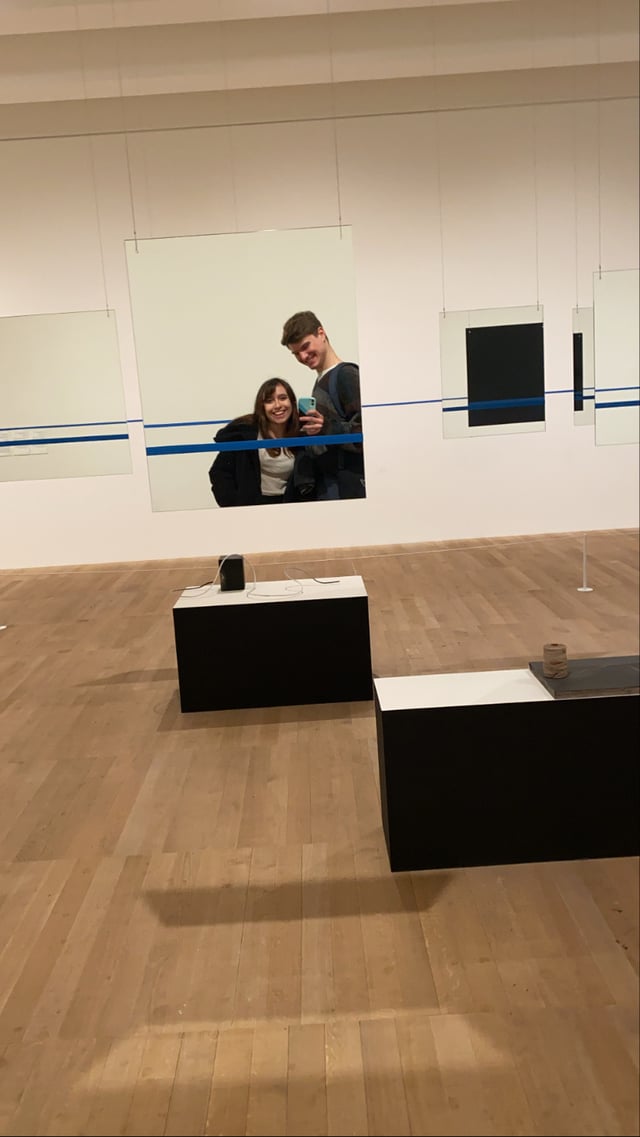 A fascinating room filled with hanging mirrors suddenly becomes an opportunity for a selfie.

We spent hours roaming through the many different exhibition halls and admiring the behemoth size of the museum itself. I was completely in awe of Kara Walker’s current installation, Fons Americanus, a massive fountain placed on the first floor of the building which forces guests to confront the uncomfortable reality of Britain’s imperialst legacy and the impact of the transatlantic slave trade. I also had a surprisingly good time walking through the gift shop, where I doted on the t-shirts, mugs, and posters covered in some of the museums most popular pieces of art. The view from the top of the Tate was breathtaking, and the first time I had seen the city of London from that high up. 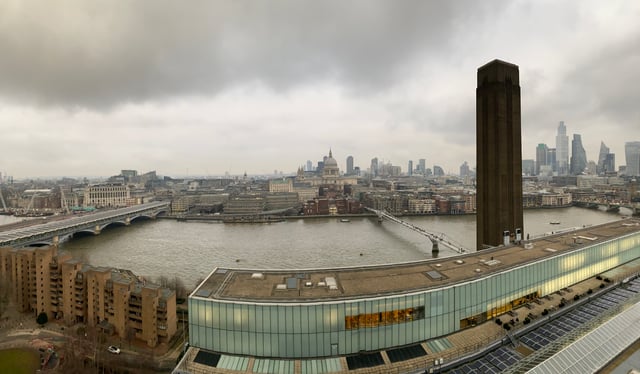 One of the most impressive parts of the Tate was the view from the top floor.

It was also at the Tate that I received a bizarre text from a different friend, telling me he had a ‘crazy idea’ for an ‘amazing night out.’ Not entirely sure what he was thinking, I asked him to explain, to which he responded that he wanted to go to a trampoline park called “Flip Out London” because of some cheap ticket deal they were promoting. My brain immediately came up with dozens of reasons why going to Flip Out would be weird or pointless, but my gut told me that I needed to do this, so minutes later we had bought tickets and solidified our plans. The actual trampoline center was way out in East Ham, which is a Zone 4 neighborhood towards the end of the District Line – about a 45 minute tube ride from the center of London. There was no backing out now: we had committed.

Hours later, I find myself flying through the air, bouncing from one trampoline to the next and having the kind of unadulterated, giddy fun that I rarely find in my post-childhood life. Yes, my friend and I were definitely the oldest people in the room outside of the parents who had come there with their kids, but we were also shamelessly having an absolute blast at this trampoline park. We discovered a secret web of dark, spooky tunnels that Flip Out had built as a side attraction for kids less inclined for jumping, and spent some time crawling through a dark, cramped tunnel system that was clearly not designed for people our size. 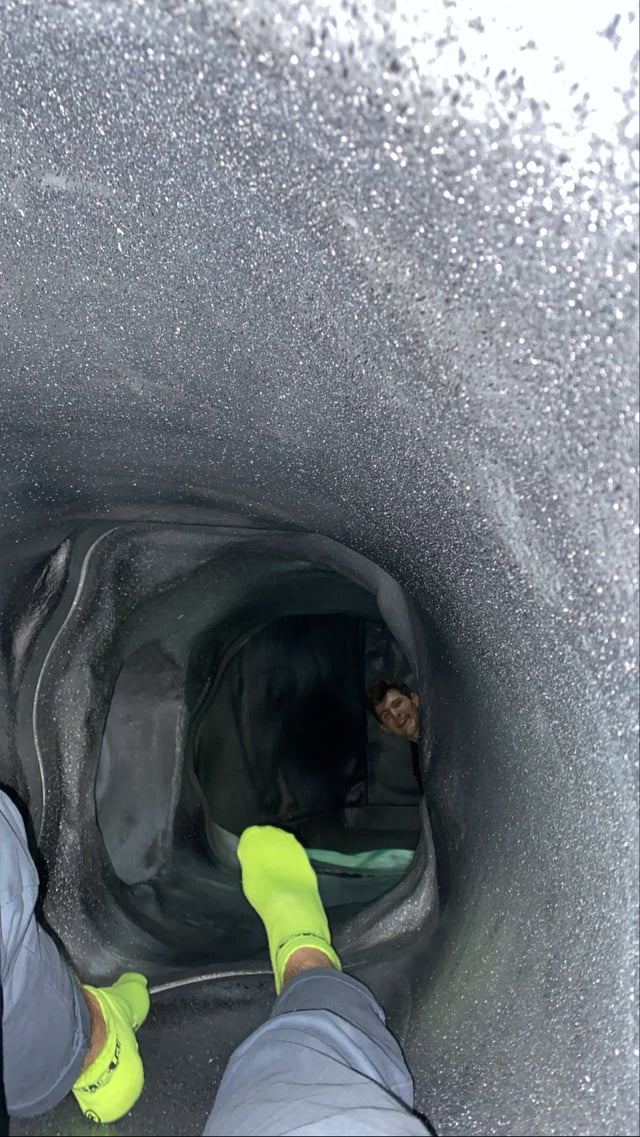 Perhaps the most surprising and memorable aspect of the trip to the trampoline park was the discovery of this crazy tunnel system. You can see my friend Jacon’s face grinning in the distance.

After an hour and a half of climbing, sliding, swimming in ball pits, and jumping on every trampoline we could find, we left Flip Out exhausted but thoroughly content. That weekend brought me three very memorable and relatively inexpensive experiences that I could not have planned for, and they were so much fun precisely because I could not have anticipated them. London’s always got something out there for you to throw yourself into, and just because it’s not waiting for you on the endless pages of Time Out London or Eventbrite doesn’t mean you shouldn’t trust your gut – and your friends – and explore the city to your heart’s content.