In this week's post, Elizabeth takes us to two milongas: places where tango dancers show off their moves.

Thanks to a little encouragement from my roommate and a required part of my coursework, this week I finally got to experience--twice-- Buenos Aires’ arguably most renowned cultural phenomena: tango. It’s really fun.

A milonga is a tango dance that’s open to the public, usually for a small fee.  They’re all over Buenos Aires, and often they feature a full orchestra, beginner lessons beforehand, and a tango show.  People from all over come to learn, or watch, or dance tango.  (Usually people only dance if they really know what they’re doing.)  Tango is a very intricate and intimate dance.  The first thing I noticed was how closely couples danced--cheeks or foreheads touching, arms pressed together, chests and legs grazing each other lightly.  Everyone seemed to have a different dancing style.  Some made swift, close steps and lifts with their legs, others glided slowly, some stood perfectly upright, some leaned in close to their partners.  Many women danced with their eyes closed.  One of my favorite parts of watching the milongas was seeing how the same dancer changed his or her style and energy depending on the partner, since people typically change partners after each dance.

The first milonga I went to was called La Viruta, in Palermo.  It was very casual, and offered several lessons which were mainly attended by tourists.  After the tango lesson there were also lessons in folklore and rock.  I learned to dance (badly) a little of the Chacarera, which is a style of music and dance from rural Argentina.  The dance involved lots of wide, sweeping steps for the female dancers, and lots of stomping for the men.  It also involved snapping and clapping along with the beat, which in a class full of beginners ended up being lots of frenzied, off-beat noise.  I really enjoyed it, and the music was interesting and beautiful, and a little melancholy.  I think Chacarera music is usually in a minor key.  The rock lesson I skipped, but it was a blend of country, rock and roll, and swing, and there were several seriously impressive dancers.  Afterwards came a brief tango show of 5 different couples.  It incorporated some other styles and of dance and music as well, and felt very free and improvised.  At one point one of the dancers hopped in to dance with a different couple, so that the man was dancing with a woman in each arm.  Really impressive, although not very traditional. 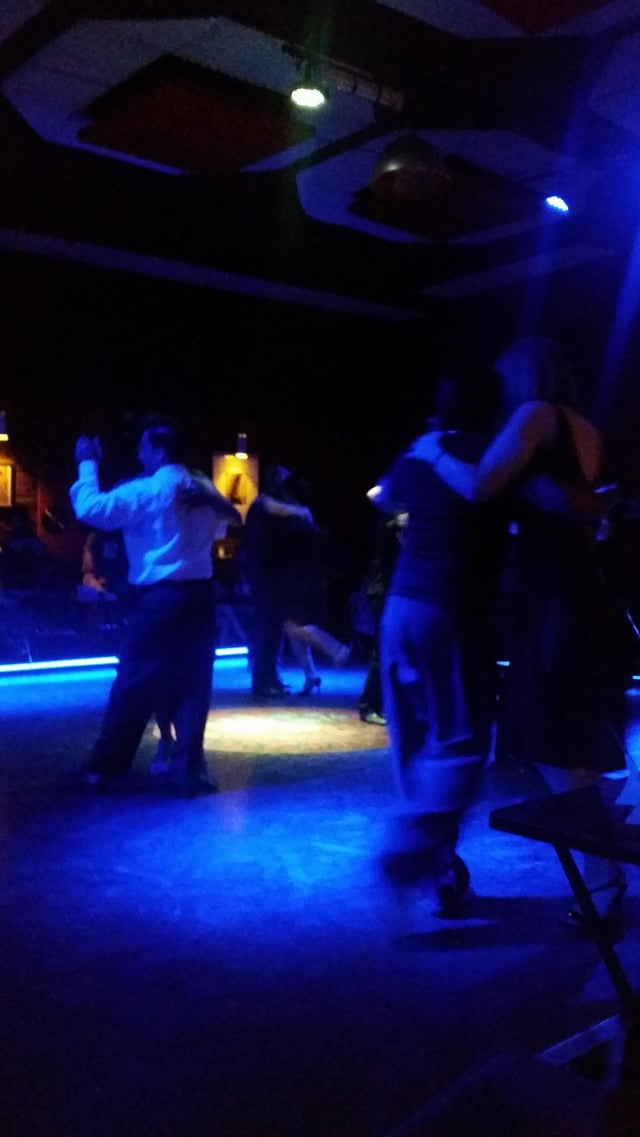 The second milonga I attended as part of a class project at my university.  It was in San Telmo, and was much more traditional, with tango danced exclusively.  It almost felt like a secret meeting, because the building was small and non-descript, marked with a small sign over the door.  The milonga itself was up a narrow flight of stairs, and inside was a cozy, dramatically lit room with a small bar, a stage for the orchestra, and a stage for the dancing in the center of the room.  The tango dancing here, especially the show, was really incredible, but the highlight for me was the band.  There were no percussion instruments, but the players kept heavy beats with their feet and by striking or tapping their instruments in various ways--I’m honestly not sure how some of the sounds were produced, but it was amazing.  The bandoneon players were my favorite.  They’d lurch forward with every beat, and sway along to the stretch of their instruments.  It’s much longer than I’d expected--it looked like 2 or 3 feet!  The singer was great as well, and it was almost surreal the way his voice seemed to change the whole atmosphere of the room-- the band, the lights, and finally, the expressions and movements of the dancers and the audience.  By the end of the night, everyone was cheering for an encore. 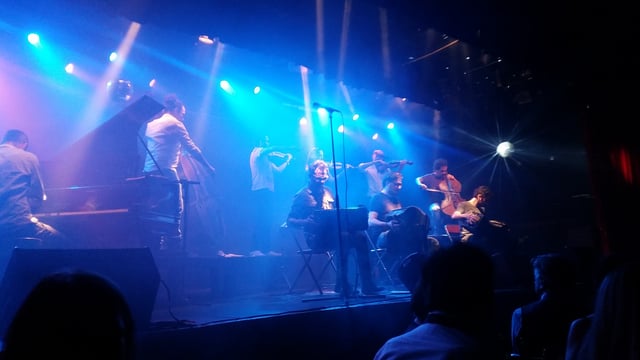