In this week's post, Colin shares one of his favorite experiences in Sydney so far: The Bondi to Coogee cliff walk!

Setting the 6:00am alarm as I crawled into bed Saturday evening was brutal. We had spent all day at the infamous Bondi Beach splashing in the saltwater, soaking in the sunshine, and settling in the sand. I’m always surprised by how exhausted I return from a day of lounging on a towel. (Rough life, I know.) Regardless, a good night’s sleep was necessary; we planned on departing for Coogee Beach early Sunday morning to set off on a coastal hike.

The Bondi to Coogee Walk is a 6km (3.7 mi) coastal cliff top hike through Sydney’s eastern suburbs. Consisting of six unique sections, each stretch features a different style of terrain and different set of breath-taking views. Apparently, it’s supposed to take around two hours to complete, but factoring in the additional time for oohs, aahs, and water breaks, it took us a bit longer. 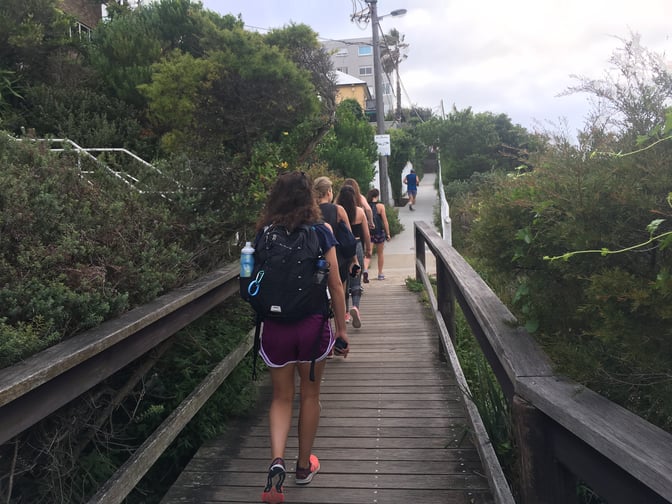 We started the trek at Coogee Beach around 8am to avoid the afternoon sun and extreme heat. The beach bustled with children at what appeared to be the final day of swim lessons—a drastic difference from the chlorinated cube where I learned the front crawl! While considerably cloudy, we still felt the UV rays and lathered on the SPF 50 before beginning. Since there’s essentially no ozone layer here, the Australians take sun protection very seriously. They even have their own saying: Slip, Slop, Slap, Seek, Slide. That is, slip on a shirt, slop on sunscreen, slap on a hat, seek shade, and slide on some sunnies. We saved ourselves from sunburn and set off on the path. 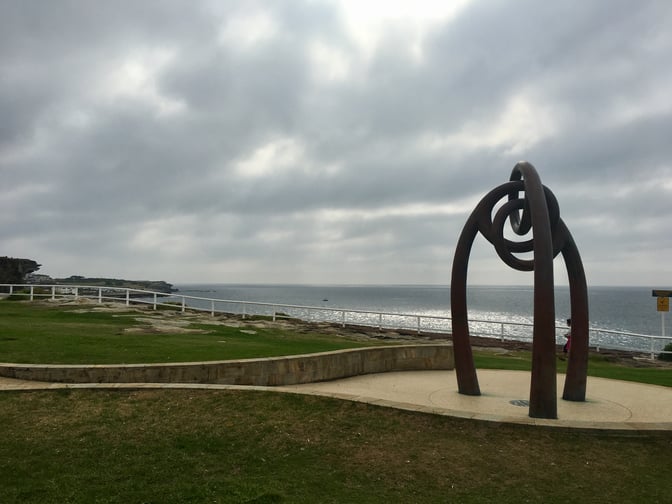 Primarily composed of steep stairs and winding ways, we stopped at each beach along the way for brief breaks to admire the area. Some were quiet, others crazy. Clovelly Beach hosted a large family barbecue, while Bronte laid low with a few sunbathers. Tamarama Beach, nicknamed “Glamarama” for its reputation of attracting beautiful people, was absolutely picturesque. A large cliff just past the area proved perfect for a moment to add myself into the “glama”.

To our surprise, we were led through Waverley Cemetery, a detour from the usual path, as storms had deteriorated the cliff along the existing trail. Overcast skies loomed over the rolling hills adorned with meticulously sculpted monuments. An eerie, yet beautifully quiet moment amidst our beach-hopping stroll. 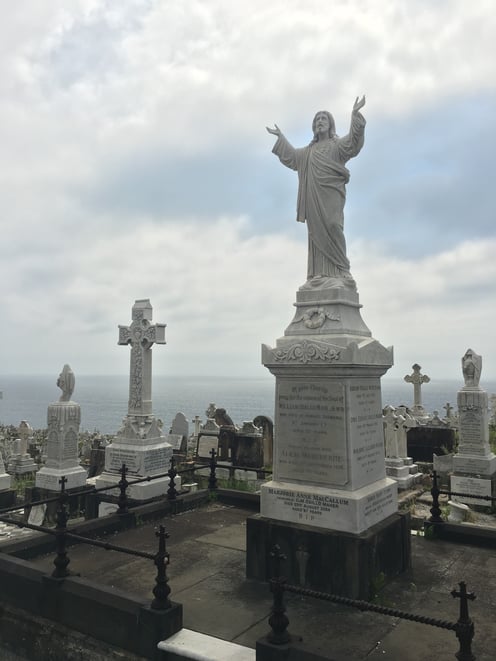 Throughout the walk, several runners whizzed by as we stood and snapped photos of our stunning surroundings. That’s when it occurred to me that this is their home. This is their everyday. The cliffs, the sand, the azure water: it’s all old news to them. A rather humbling perspective, I realized how out of place we really were.

Tourists flock to my hometown in Western New York each fall to admire the autumn leaves. While beautiful, the rolling hills of red, yellow, and orange were just another everyday view out of the window to me. Even more, they were the same leaves I resented as I raked them up on Sunday afternoons. 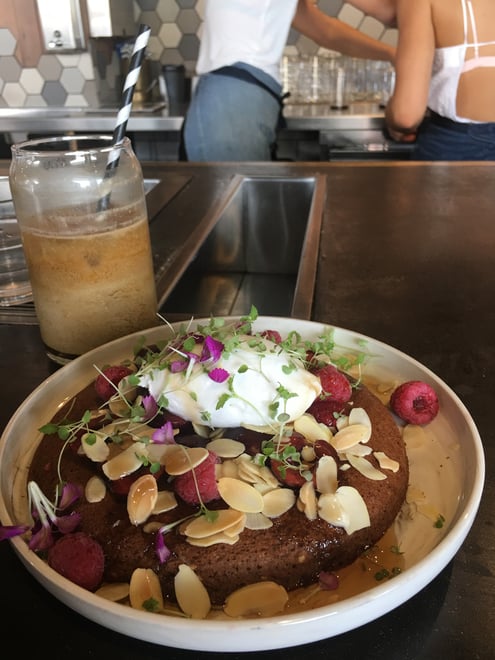 In this moment, I understood how we all interact with the world in such different ways; how we all take different things for granted. It reminded me to appreciate every bite, every sight, and every moment I’ll have the privilege of experiencing while in Australia, because sooner than I realize, only pictures will be left. 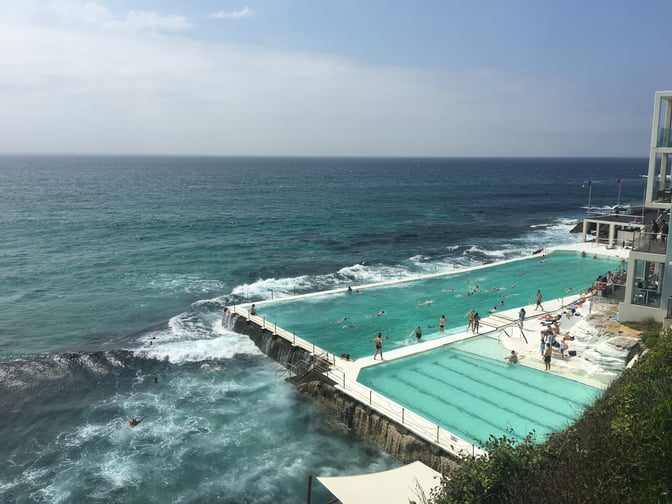 We were welcomed to the finish at Bondi with a view of the Icebergs Club pool. They invite visitors to take a dip in the pool by the sea for just $6.50, but our stomachs grumbled for brunch as we admired the bathers from afar. Harry’s Bondi cured our appetites with their fresh and delicious culinary creations. I opted for an iced latte and the cacao hot cake with coconut chantilly. If the views hadn’t already made the 6:00 alarm worth it, this airy confection sprinkled with fresh raspberries, toasted almonds, and a dollop of delightfully tart cream definitely did.

The remainder of the afternoon was spent—once again—lounging on a towel as we celebrated a day well-spent and recharged before tackling another week of classes. (Rough life, I know.)