In this week's post, Cat talks about why her Irish Cinema class is her favorite, referencing some movies she's watched so far.

While studying abroad, I take four courses in total: two CAPA classes and two University of Florida classes. Taking all of these classes and interning at the same time is a lot of stress, but there is one class that I look forward to attending the most every week. It’s called “Irish Cinema.”

Led by Professor Susanne Bach, the class focuses on the history and connecting themes in Irish film. Twice a week we get to watch films and talk about them, sounds like a dream class right? Well, it is. 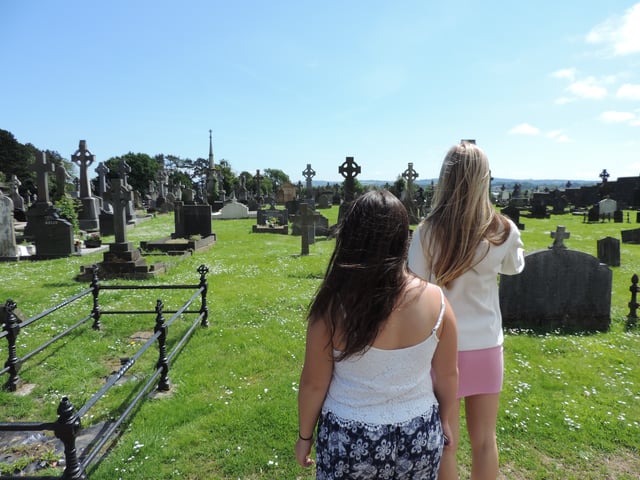 Photo: by Maile Suganuma. My friend Madison and me standing in the cemetery searching for Gerry Conlon’s grave.

I remember the first week when I fell in love with the class. We watched My Left Foot, the story of a child with cerebral palsy growing up to become an excellent artist and writer. The catch is that he only writes and draws with his left foot. The character played by Daniel Day-Lewis was based on an actual person named Christy Brown who grew up in Ireland. The film was so powerful it left everyone in tears. That set the tone for the upcoming weeks.

And so, each week we showed up ready to be amazed and we would leave either shocked or in tears, but in a good way. Each week I am surprised by the complexity of every Irish film we watch and at the amount I’ve learned about Irish culture just from watching these movies. Just the cramped, many-children-per-room living situation depicted in My Left Foot displays the poverty many families endured during the mid-1900’s.

One movie left me more than sad. It left me angry. That is: In the Name of the Father; a stunning drama based on real events about the Guildford Four. The Guildford Four was a group of people convicted of planning and carrying out the Guildford Pub bombings in London. They were wrongfully thrown in prison with no evidence, and remained there fifteen years until they were finally declared not guilty in court.

The worst part was the police knew for a long time that the Guildford Four were innocent because the real bomber came forward, but it took several years for them to admit it and give the prisoners justice.

My friend and I were so affected by the film that we brought flowers to one of the victim’s graves in Belfast. Unfortunately, we could not find the tombstone among the thousands so we left the flowers in the grass.

The next week class got even better. We got free tickets to watch a screening of Nora at the Irish Film Institute and wait for it…we got to speak to the director herself, Pat Murphy. 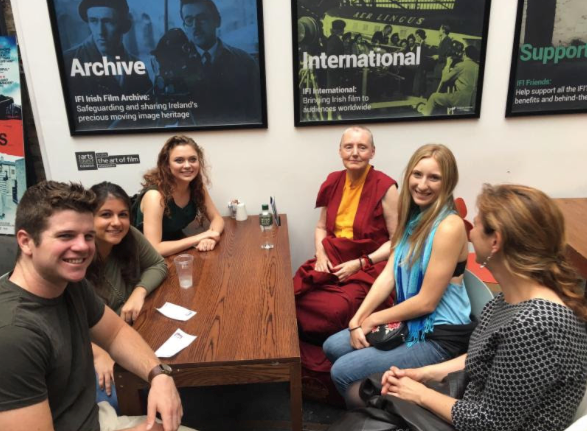 We packed into the theater to watch the film about the relationship between famous-writer James Joyce and his lover Nora Barnacle. The most memorable aspect of the movie was that it portrayed a very real love, not a fairy-tale love, but a violent, passionate type of love. It left us in tears once again.

To make the day even more special, the screening was on Bloomsday, a holiday dedicated to James Joyce. So, after the film our professor took us to a pub to experience the celebration. People dressed up in 1800’s garb and wore hats just like Joyce. I have never felt such a part of Irish culture.

Photo: by Susanne Bach. A Bloomsday celebration in the heart of Dublin.

I would be lying if I said I don’t enjoy the class for the simple fact of watching movies, but there is more to it. Every time I step out of the classroom, I’ve changed. I have grown, evolved and I see the world differently. Every single time.

And maybe I’m crazy to search for a grave of a man I never knew only to put flowers on it, but film connects us. Film is what allows us to understand the past, and more importantly, relate to it. And so the class is of more value than any math or science class I have ever taken. So thank you for that, Susanne.