My Global City: Why You Should Visit Belfast

In this week's post, Brandon shares why he recommends attending this My Global City event to Belfast and how rich the history in Northern Ireland is.

Today I thought that I would spend some time talking about another My Global City event. Last Friday, we went on a CAPA-sponsored trip to Belfast, which was mandatory for those in Irish History (which is a Griffith-offered course) and optional (but highly suggested) for all others on the program. I’m not in Irish History, but I do know that before the trip began, the professor emailed them some videos about Belfast’s history during the Troubles and various other materials to better illustrate the stops during the trip. He explained it to all of us, however, so reviewing this material beforehand was not necessary. 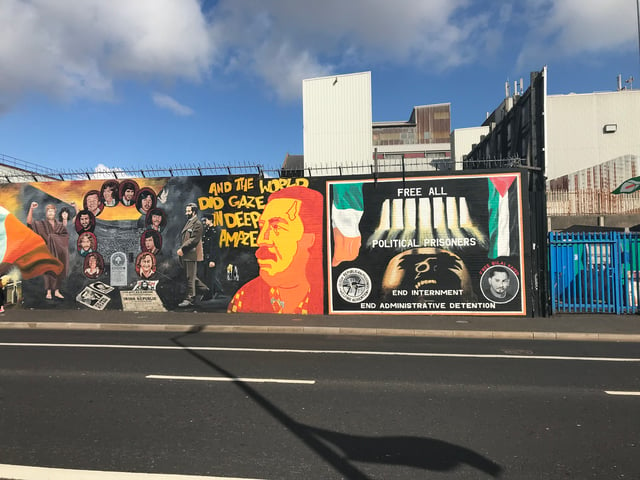 Graffiti of a wall outside a Catholic neighborhood.

We started out for Belfast bright and early at 7:15am; taking a coach bus north from Dublin on the M1. The bus was filled with a lot of other international students who were quite hyper for how early it was. I tried to nap and get some rest, but they had apparently filled up on coffee before getting on the bus, so I ended up just putting in my headphones and watching the scenery fly by. We stopped briefly at a truck rest-stop having crossed the border into Northern Ireland to have a bathroom break and for people to get a quick breakfast if they were hungry. It was so odd that there was no border wall or any kind of checkpoint between Northern Ireland and Ireland. There was the slightest line in the road to mark where the border was and that was it. With the implications of Brexit, however, this free flow between the two countries is much contested, and it is not known if there will be actual checkpoints in the future.

Once in Belfast, the professor gave us a brief overview of the history of the Troubles and the guerilla war waged by the IRA against what they considered to be the British occupying force in Northern Ireland. Our first stop in Belfast was to see a wall dividing a Catholic, pro-Irish neighborhood from a Protestant, pro-British neighborhood. The entire wall was covered in graffiti mostly glorifying the resistance against the British and calls for political prisoners to be released. The telephone poles around the wall were hung with Irish flags, which meant that we were in a pro-Irish neighborhood, as in a pro-British neighborhood, there would be Union Jacks flying all about. 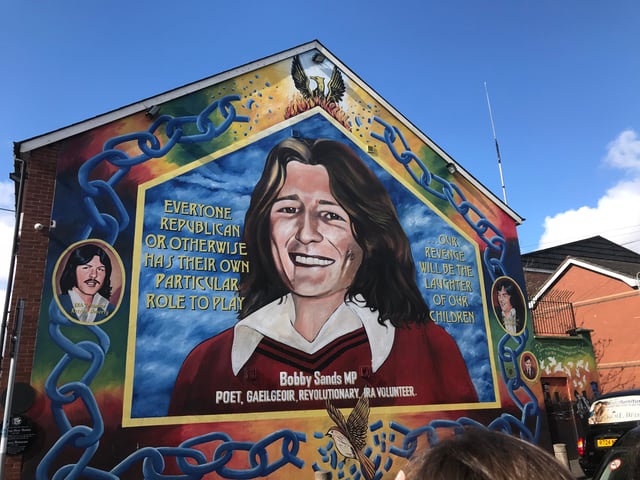 A mural of political prisoners who died on a hunger strike.

We also went to the head office of Sinn Féin in Belfast, which had an enormous mural on the outside wall showing Irish resistance fighters who had died in prison on self-imposed hunger strikes. The hunger strike was a historical, Irish way for the weak to fight against the strong, with the strong either having to knuckle under and comply with the striker’s demands or let them starve to death, upon which the striker’s death was on their hands.

We next stopped at the official cemetery for the IRA. We walked into the graveyard a bit and came upon a huge, black headstone with the names and deaths of all those we had died during the resistance against the British. Our professor also talked about how, when the Troubles were going on, that he had attended a funeral for a member of the IRA out of curiosity. The funeral was attacked by a pro-British resident of Belfast and sparked a backlash by the media; which saw both Irish and British forces realize the image that the Troubles had tarnished Belfast with and helped bring about a lasting peace between the two sides. 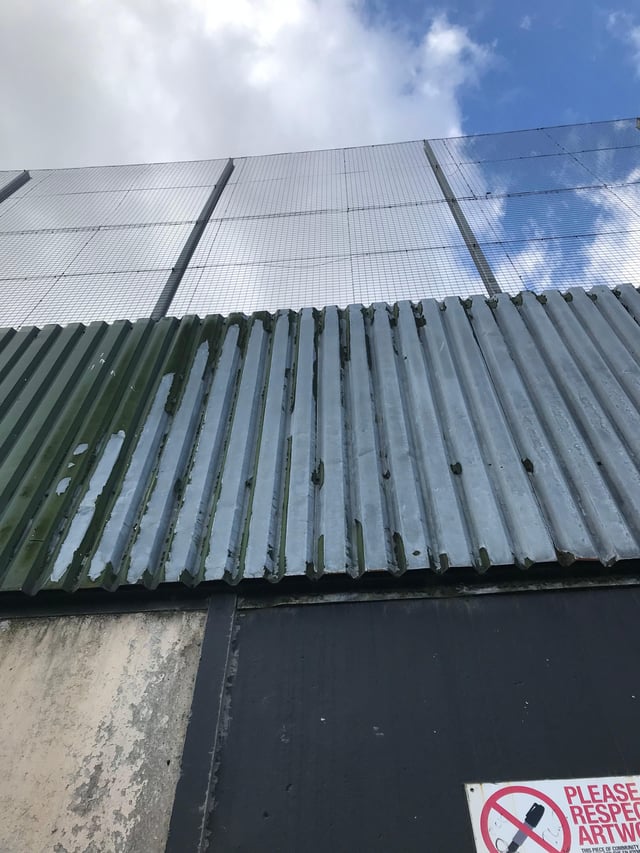 Looking up at the peace wall. It's hard to judge its scale, but it was probably 30 feet tall.

We also saw one of the so-called “peace walls” built to divide Protestant and Catholic neighborhoods during the worst of the Troubles. They were very tall, probably 30 feet in some places, and covered in pro-peace graffiti and wonderful artwork calling for their destruction and a joining of both sects in Belfast.

The last leg of our journey was spent in the Titanic Museum. It was a wonderful exhibition, taking us through the full conception, construction, and later sinking of this awesome ship. It was truly amazing to be able to see where the Titanic was built and the stories of the survivors, which were all chronicled in the exhibit. 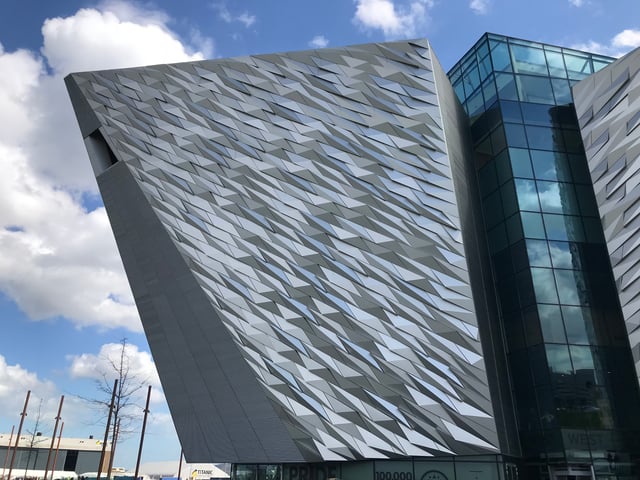 The exterior of the Titanic museum.

I would highly suggest this My Global City event. It speaks to the rich history of Ireland, and to a colonial past that is not far off from contemporary times. It was only in the 1990s that the Troubles ended, and only in the 1940s that Ireland won its independence from Britain. Northern Ireland and Belfast are a reminder of how far Ireland has come as a nation and to the struggles that it took to win freedom.

I hope you enjoyed this blog post, and as summer weather finally begins to appear and the semester starts to wrap-up, I wish you well on all your college finals or whatever you may be doing!