My Remote Cultural Experiences in London

With the availability of virtual tours, Savanna has been able to experience the global city of London and its culture firsthand as part of her remote study abroad and internship program. Take a look at her visits at the Houses of Parliament, The British Museum, and the Museum of London Docklands.

This semester, I made the decision to pursue a remote internship in London. While this decision was easy to make for the sake of my career path, it was difficult knowing that I would be giving up the cultural immersion aspect of study abroad. Instead of living in London and experiencing a new culture firsthand, I am conducting all my work from my bedroom. In order to make sure I am not completely losing out on the cultural experience, I have been exploring the city online.

Taking virtual tours of London has been my favorite way to explore the city while at home. I have always been a fan of architecture and the history behind the formation of cities. Knowing this information gives me a better understanding of the people who live there, which is important to me as an International Relations major because I have been taught to take in the whole picture.

Here are a few of the landmarks and museums I’ve visited this semester:

Touring the Houses of Parliament was exciting because each room had its own information page detailing the uses and design feats. One day I hope to be in this building for work rather than doing a virtual tour. Another cool feature of the virtual tour is the timeline, which starts at 1832 and ends at present day.

A virtual tour of London’s Houses of Parliament.

From government buildings to art museums, The British Museum, most famous for housing the Rosetta Stone, offers various tours of their current exhibits. One thing I miss the most about pre-COVID life is being able to freely roam museums and sit in exhibit halls to do homework. Being surrounded by art motivates me to do some of my best work because of the history behind each piece.

While on the virtual tour of the Rosetta Stone exhibit, I learned that the stone has been used for centuries to decipher ancient hieroglyphs. The stone has three sections: religious hieroglyph, non-religious Egyptian script, and Greek. When hieroglyphs went out of style and the language was unknown, people were able to use the Greek to translate the meanings of the religious and non-religious sections of the stone.

Another museum that offers a great virtual tour is the Museum of London Docklands. I like this virtual tour the most because it shows the building layout. As I have mentioned, I am a nerd for architecture, so this museum allows me to see the layout of the building. It also shows the transition between exhibit halls, which makes me appreciate the museums curators who have designed these unique rooms. During my tour, I learned the many uses of this building throughout time. It sits on the Thames River and the tour explains the history of the river and its uses in the development of London. Now, the building can be rented out for events including charity fundraisers and weddings. At its prime, the building was used as a docking port.

A virtual tour of the Museum of London Docklands.

Through my virtual tours of government buildings and museums, I learned a lot about British culture. The Houses of Parliament tour taught me the comprehensive history of the UK Government. The British Museum visit taught me about the famous Rosetta Stone and the reason why it is now housed in Britain. The London Docklands building taught me the importance of the river system in England. Now I can say I feel a little more connected to British culture! 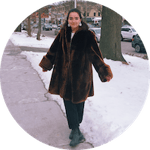 Savanna Nolau is an official Remote CAPA blogger/vlogger for spring 2021, sharing her story in frequent posts on CAPA World. An International Relations  major from Suffolk University, she is remotely studying abroad and interning in London this semester.