In this week's post, Kayla shares some of her favorite stories behind famous sights in Florence, all of which she learned on the CAPA MyEducation Secret Florence Tour!

I think the tours that inform you of myths and legends behind certain monuments and places are the best tours to take. Don’t get me wrong, I fully appreciate historical and factual tours that give you the information you need to understand whatever it is that you’re observing. Sometimes, though, it’s more fun to believe ridiculous stories.

Thanks to a My Global Education tour offered by CAPA, I had the opportunity to learn about some of the crazy stories attached to sights that both tourists and locals pass by every day!I don’t want to spoil all of the good stories, so I’ll just mention a handful of my favorites.

Let’s start with Dante’s Stone. For those of you who don’t know, Dante is quite the figure in Italian history. He is said to be one of the greatest poets of all time, being the author of Divine Comedy and all. He also insisted on writing in the native Tuscan dialect, resulting in the establishment of a national Italian language! So, now that you have an idea of how important this guy is, it won’t be so hard to believe why a rock has made its way up to one of the most famous stories shared about the city. This rock was supposedly Dante’s favorite place to sit and ponder, as he would write for hours and get lost in thought often. One day, Dante was having a pleasant conversation about food with one of his merchant friends when, all of a sudden, he got lost in his thoughts again. Before leaving, his merchant friend asked Dante what he considered to be the “most delicious food” and Dante replied, “hard-boiled eggs.” I know, right? One year later, the merchant friend returned to Florence to observe the progress of the construction Santa Maria del Fiore, only to find Dante sitting in the same position on the same rock, lost in his thoughts yet again. To play a trick on Dante with their conversation they had the year prior, the merchant friend sneaked up behind him and asked, “Eaten with what?” Dante, not looking up from his notebook, effortlessly replied with, “Salt!” 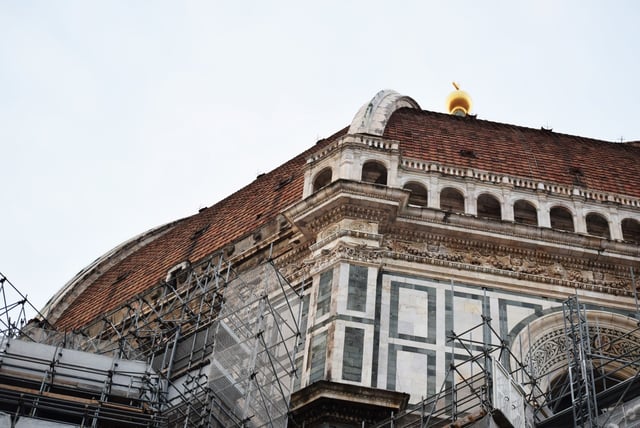 After Brunelleschi finished building the Duomo, Baccio D’Agnolo was given the job to decorate the drum at the base of the cupola. D’Agnolo came up with a vision of eight sides of white marble arches. After completing one out of the eight sides, he decided to hear the opinions of the people. He wanted to ask the public what they thought of his work before he continued with the other sides of the octagon. Coincidentally, the very famous and admired Michelangelo just so happened to be in Florence at the time. What better opinion to ask for than that of one of the most respected artists of all time? After observing the arches, Michelangelo, with an audience waiting behind him, told D’Agnolo that his design looked a lot like “a cricket cage.” After hearing these words, Baccio D’Agnolo was so offended that he ceased all construction on the Duomo… forever. 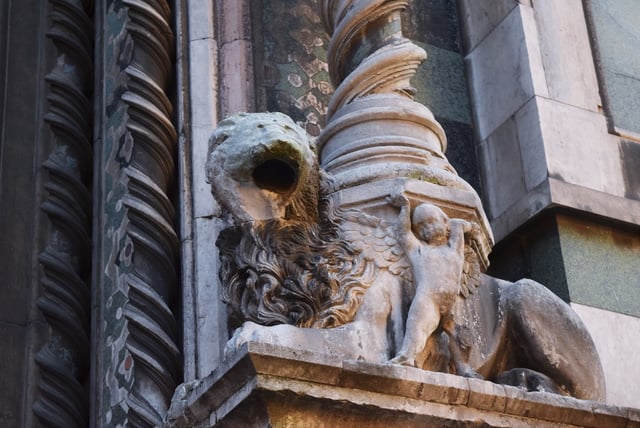 Photo: Lion statue in front of the Duomo’s “Door of Lions”

Although the symbol of the lion was and is a reoccurring symbol in the city of Florence, not everyone loved these creatures. In the 1300s, a citizen of Florence had a reoccurring nightmare of being mauled by lions. The thought of being torn to pieces by a lion led to this man developing a phobia of the feline. Refusing to visit the live lions once held behind Palazzo Vecchio, this man eventually sought help from a doctor. The doctor proposed that the man face his fear with inanimate lions instead of the real ones. He suggested that the man walk up to the “Door of Lions” and stick his hand in the jaw of the stone lion statue. This, he said, would cure him of his phobia forever. One morning, the man confidently marched up to the statue, with a crowd of supporters behind him, and stuck his hand in the jaw of the lion. Unfortunately, there laid a sleeping scorpion, who woke up to a hand in its home. The scorpion then stung the man’s hand and after the shock of the experience, the man had a heart attack and died on the spot. 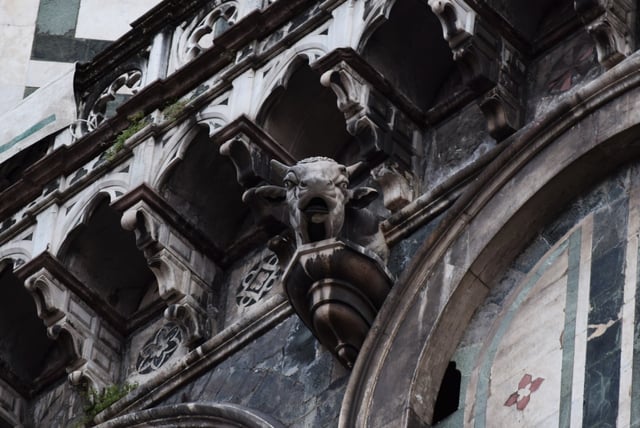 Photo: A bull head on the side of the Duomo

Last, but definitely not least, my favorite story! Attached to this freaky-looking bull head is the story of a baker, his wife, and a stonemason. The bull head was said to be placed in that exact position by a stonemason that was working on the cathedral at the time. This stonemason was the lover of a local baker’s wife. Enraged by this discovery, the baker brought the two to court and had them legally forced to stop seeing each other. Although they were separated and the baker got what he wanted, the stonemason thought of a way to make sure the baker never forgot that his wife was in love with another man. The stonemason decided to carve a bull head and place it in a position so that it looked down directly at the bakery so whenever the baker looked up, he would see it and be reminded of his wife’s betrayal. People say that the horns had a metaphorical meaning – the animal does not see the horns himself, but everyone who looks at him can see. This was the stonemason’s message to the baker – that the baker was oblivious to the scandal happening right in front of him.

This cow head (yes, it’s actually a cow head) was actually placed here as tribute to all the animals that helped with the construction of the Duomo. But as I said before, it’s more fun to believe in the folktales.

I hope you all enjoyed those stories as much as I did! Thanks, CAPA!