On Meeting Locals, Blending In, and Stereotypes in Florence and Siena 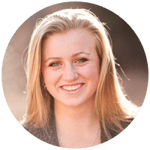 In this week's post, Hannah details her experiences with Florentines, representing Americans abroad, and attending the Palio di Siena race in Siena.

As an American study abroad student, I was aware of how I would stick out in Florentine culture. During our CAPA orientation, we were warned that American students had unfortunately gained a negative reputation in Florence. For example, they are well-known for binge drinking at the bars at night and getting perhaps too out of control. We learned that Italians have a different approach about drinking, and it is a part of their culture to enjoy good wine and alcohol with food. My roommates and I were determined to be mindful as we represented ourselves abroad.

I bought a neckerchief for the Contrada della Oca—the house of the Goose.
Siena's streets are divided by each neighborhood, or contrada, in different sections around Piazza del Campo.

Aside from this, I knew I would be representing Americans more generally abroad too, and I was therefore more conscious of how I acted compared to Italians, and to other American tourists visiting the city. Occasionally I would see people watching me and my blonde hair and blue eyes, walking with what was probably too much wonderment through the small stone-covered streets. I was not foolish enough to think I was anything but a tourist while I lived in Florence, but I tried as much as possible to “blend in,” for a lack of a better phrase, to experience the culture as best I could through the eyes of the locals during the day too. This meant speaking in Italian as much as possible, meeting new friends, and branching outside of the popular, touristy city center in Florence. To an extent, this goal also fueled me to travel outside the city to the Dolomites and to the Italian Riviera; I wanted to see as much as possible what lifestyles were like from the Italians’ perspectives in different places. 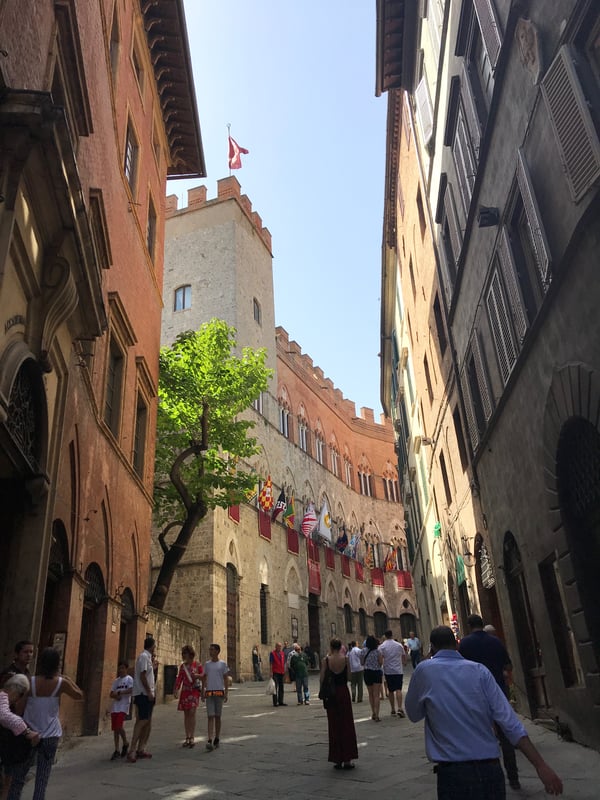 The streets of Siena the morning before the race.
Each flag that hangs above represents one of the Sienese neighborhoods.

I met several locals who had shops located close to my apartment, just west of the Santa Croce neighborhood. La Pizzicheria Guadagni, on Via Isola delle Stinche, had the best panino in town. I knew this because Lorenzo, our funny and gregarious CAPA Resident Director, gave us a short tour of the city during our orientation, and we stopped in for lunch at the pizzicheria for the first time. I returned many times after that to practice my Italian with the owners and to enjoy fresh panini with finochiona—a delicious salame made with fennel.

I also made friends with the owner of a local bike shop where I rented a mountain bike every other weekend or so to go riding in Fiesole and Vallambrosa, both smaller areas near the outskirts of Florence. The owner, Anna, gave me great tips on the best routes out of the city and we got to know each other through the sport. I coincidentally ran into Anna in Santa Croce while exploring the city, too, which was funny because the city felt quite large to me. Anna runs the bike shop with her daughter and ex-husband, and enjoys riding with her friends on Sundays outside of the crowded streets of Florence. Locals like Anna and the couple who ran the panino shop made me feel, though I was still an outsider to Italian culture, that I could learn in a respectful and engaging way about Florentine life and feel somewhat connected to the lifestyle in my study abroad city. Their openness and friendly nature invited me to get a little bit closer to a new way of life.

Perhaps I stood out the most during Palio in Siena—a huge traditional festival in Siena with parades and a competitive horse race between the neighborhoods in the evening. I met a friendly local in Siena who gave me some tips on how to remain respectful of the historical ceremony while also getting to experience the excitement of the entire day as tourists. I went to Siena with a newly-made friend who, was also studying abroad in Florence, named Taylor. The Sienese man sat next to me on a park bench as I waited to meet up with Taylor. “Di dove viene?” he asked me—Where are you from?—“Gli Stati Uniti, a Colorado,” I responded (translation: Colorado in the United States). He told me (in English) that he went to medical school in Montana and had friends in Boulder, and he has been a surgeon in Siena for over 10 years. He then insisted that I watch the ceremonious parade that starts at the Duomo in Siena and ends in the middle of Piazza del Campo, the largest square in the city. While we talked, it was obvious from his tone and his many suggestions that the whole festival and horse race had to be taken very seriously, and really wasn’t a place for tourists. Taylor and I tried to be as respectful as we could while we watched the parade, making way for flagbearers and drummers in the narrow streets that circle Piazza del Campo. We were occasionally pushed out of the way by members of the parade as they tried to make more space between the spectators lining up on either side of the road. “Permesso!” They would shout. 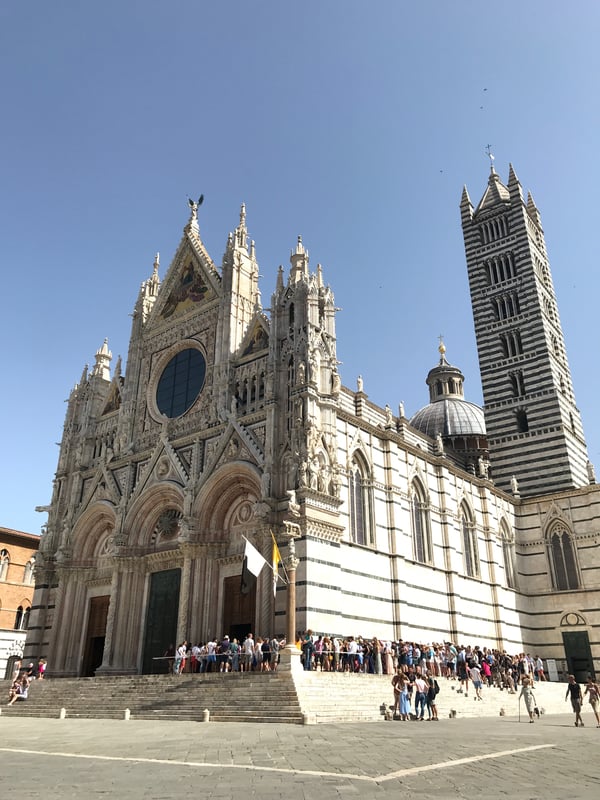 The Duomo in Siena where the parade began for Palio di Siena.

At the risk of missing our train due to the crowds, we committed to experiencing the race to its fullest, which meant that we were filed into the center of the square with hundreds of Sienese spectators before the race. Clay had been packed down on the outer lengths of the semi-circle shaped square where the horses would run around the crowds. The middle area where we stood was called la fossa del cane—the dog’s pit. There was a group of 5 or 6 Americans about our age near us, who were being quite loud and exuberant in perhaps not the most positive way. Yelling and swearing in English, it seemed as if they were there to party and not there to watch the race. Taylor and I moved away from their group and I hoped no one would approach them for being obnoxious or disrespectful. 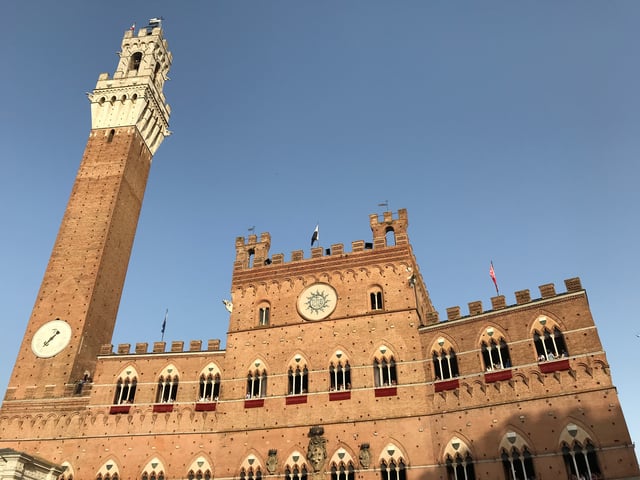 This is the Palazzo Publico in Siena.
Its tower is about 3 feet shorter than the tower on Palazzo Vecchio in Florence.

While it would be all too easy to make a separate blog post about my day in Siena about Palio di Siena and the excitement of the race, my experience that day was one example of how I really felt like I stood out in Italian culture. Taylor and I were there to “take it all in,” to experience the race and the patriotism of each neighborhood as they raced for pride and glory. It was hard to place ourselves outside of the American stereotypes, but I felt it was important to engage with the locals in a manner that allowed us to learn about their lifestyles while maintaining an appropriate amount of respect for their traditions and culture. In all, the locals that I have met both in Florence and in Siena were extremely friendly and encouraging when I approached them with an eager sense of curiosity and respect, and they surely enriched my study abroad experience tenfold. I am grateful for their patience and openness to learn about me, and to let me learn about their ways of life.