On Moving In and Megxit

James arrives in London and gives a play-by-play of how Megxit unfolded on his first full day in the city. He also compares the notion of choice, autonomy, and agency within the British and American cultures in various aspects of life.

After weeks of mounting excitement and nervousness over my arrival in London, I stepped off the plane and into Heathrow airport armed with only my wits and a Chobani yogurt tucked clumsily into my backpack. The following 24 hours passed in a hazy, joyous blur of unpacking, meeting many new faces, exploring the neighborhood of West Kensington, and becoming slowly acquainted with the tube (the yogurt, however, remained forgotten and uneaten until eventually it had to be thrown away — my apologies to my roommate, who noticed the smell before I did). 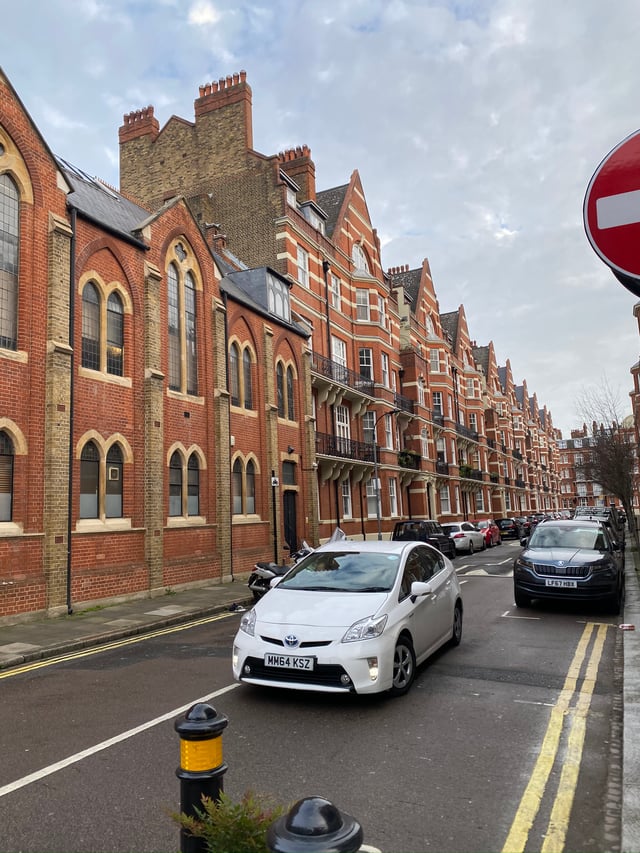 Many blocks around my neighborhood follow this model of identical, Victorian-era design. I walk by this block of houses on my way home from the tube every day!

I could not have predicted, however, that in the early evening of my first full day in London, I would receive a small news notification on my phone as I boarded the District line with my new friends. It alerted me to the fact that Prince Harry and Meghan Markle would ‘step back’ from the British royal family — an announcement that meant little to me in the moment, but would hit the tabloids and many other local Londoners like an earthquake of gossip and outrage. As it was, I chuckled at the news and put my phone back into my pocket, and the train rushed into the tunnel and away from cell service.

I use the District Line almost every day to commute to school, to my internship site, and into the busier parts of the city.

Over the next couple of hours, I began to notice a slight change in the atmosphere. People everywhere were looking wide-eyed at their phones, turning to one another and whispering. By the following morning, the newspaper stand inside the Tesco supermarket across the street was filled with papers decrying Meghan and Harry’s betrayal of the royal family and how their actions surprised and offended Queen Elizabeth II. Online, the situation was dubbed “Megxit” — a humorous play on the popular term “Brexit,” as if to imply that this announcement was tantamount to the UK’s exit from the European Union.

It was fascinating to see the different ways the news was received: American social media platforms largely reacted with joy and congratulations for the couple, while the popular media columns in London telegraphed their outrage over the ‘royal crisis’ with large, bold headlines. As silly as the entire situation may appear, watching the “Megxit” situation unfold firsthand on the streets, stores, and tube stations of London — within the first 24 hours of my arrival — was a fascinating and powerful insight into British culture and values. Strangely, understanding the layered and nuanced differences between American and British values was really helpful in my personal adjustment to life here in London. 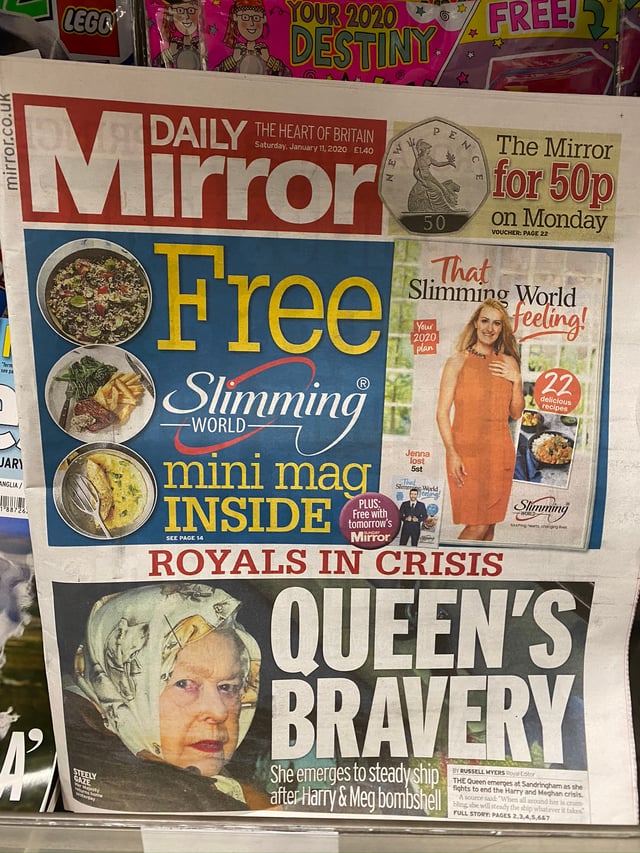 Tabloid papers exploded with the news - the gossipy headlines spread like wildfire throughout London’s public spaces.

One of the biggest cultural differences I noticed upon my arrival was the expected kind of conduct in restaurants: Londoners are more likely to view going out to a restaurant as an opportunity to enjoy the chef’s expertise and the unique appeal of that specific location. They place more emphasis on the experience of eating, and less on their personal opinions about the kind of food being served — perhaps stemming from Londoner’s famous tendency toward politeness. These implicit assumptions are reflected by the restaurant staff themselves: several of the places I have visited clearly indicate that menu items cannot be altered to suit the customer’s specific needs. If you’re not looking to order an entree from that restaurant and all the respective sides that come with your meal, it diminishes the experience you are there for. I would quickly learn this when the waiter at Indian Express asked me, shocked and confused, if I was really planning on ordering curry without a side of garlic naan. Conversely, American culture tends to give more agency to the individual customer’s experience, with the assumption that the goal of going to a restaurant is to be served a meal they will enjoy. There is a greater expectation that people can ask to change their meal so that it best fits their current desires.

It follows, then, that the more traditionally minded Brits (and tabloid columns hungry for a scandal) would expect that if you don’t want everything that comes with being British royalty, you’re not fit for the job. Though remarkably different, institutions like restaurants and the royal palace draw their power from stability and consistency — if individuals can suddenly decide they’d like to tweak the rules to their liking, it could undermine their ability to perform properly. If royal duties suddenly become optional, it could threaten the centuries-long, inflexible traditions that the monarchy is built upon. But for Americans, Harry and Megan’s decision is simply an extension of one’s independent agency (a kind of agency that many British people do not inherently take for themselves): if the Duke and Duchess would like to escape their royal responsibilities while remaining supportive of the crown and maintaining their charitable goals, they should be allowed to do so. 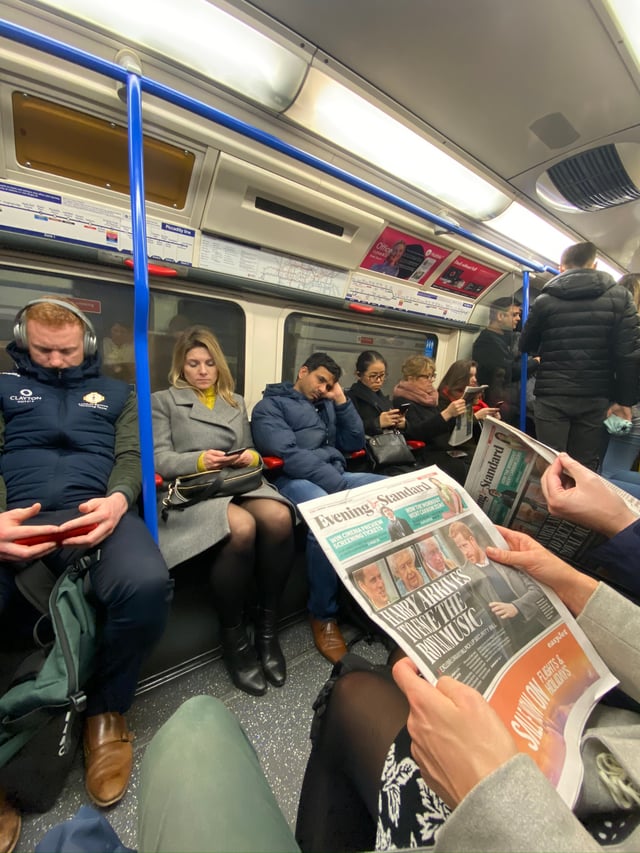 One of my favorite photos I’ve taken in my time here so far — two complete strangers sit next to each other on the tube, reading the same headline about the royal drama.

I thought about all of this as my tube screeched through the tunnels, far beneath the city streets. As I glanced around at the many Londoners with their noses buried in newspapers detailing the lurid and scandalous details of Harry and Megan’s departure, I felt a newfound sense of understanding for people who reacted with outrage to “Megxit.” Though it may seem dramatic or overwrought, the ‘crisis’ in the palace represents the ongoing (and increasingly dire) conversation Brits are having surrounding national identity and the role of the monarchy in modern, multicultural Britain — while no clear answer is imminent, Brits must continue to wrestle with these questions. And as an American, experiencing the cultural differences between the two nations manifest through this announcement and empathizing with Londoners’ anger has made this place feel a little more like home.

That’s all for now! Thanks for reading.