One Day in Tuscany: A Visit to Siena and San Gimignano

Did you know there are districts in Siena that have a corresponding animal? Did you also know there's a World Champion Gelato Shop in San Gimignano? Alexis finds out this and more on her day trip to Tuscany. 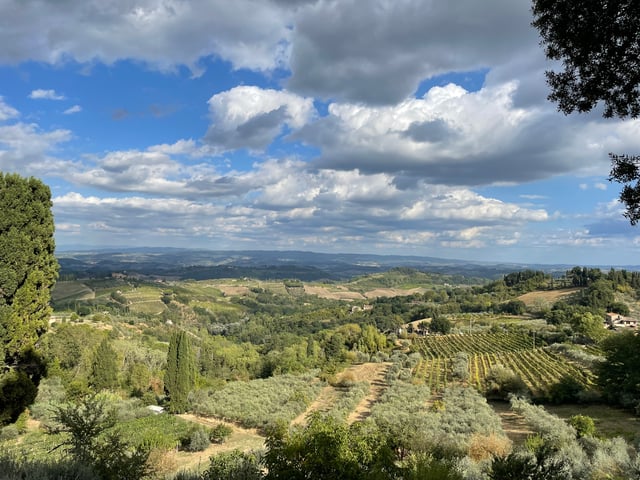 My CAPA classmates and I arrived at the bus stop bright and early for our departure to Siena. We rode on the ACF Fiorentina soccer team’s bus with their driver! It was a cool start to an amazing day ahead.

The Basilica of San Domenico

After a nice power nap, we arrived in Siena within an hour. Our tour guide, Donatella, met us right outside the Basilica of San Domenico, where our tour began. Donatella explained that the architecture of the church is Gothic. I could already tell because of the pointed arches—I learned all of that from my art history class at CAPA. I was excited to be able to apply what I learned in the classroom to real life!

The church is dedicated to Saint Catherine, who was born and raised in Siena. There are relics of her in the Basilica. Yep! Her head is on display! Don’t worry for all those squeamish people out there—her face is covered in plaster.

The Duomo of Siena

After the tour of the Basilica, we proceed to head up to the Duomo, which is situated on the tallest hill in Siena. Donatella went on to explain the 17 different districts in Siena. It was quite interesting because she said that people don't say that they are from Siena; instead, they identify themselves by their district! She and her husband are from the Porcupine district, and her children are from the Forest district, where they were born. The districts each have a corresponding animal—including a unicorn, rhino, eagle, and even a dragon! Of course, I had to imagine which district I would be in and it would for sure be the dolphin district! I admired the pride that the citizens of Siena have toward their districts.

Caption: Exterior of the Duomo of Siena.

After trekking up the hill, we finally arrived at the Duomo of Siena. At first sight, the Duomo took my breath away. The interior of the Duomo did not disappoint either! Its columns made of beautiful black and white marble and its ceilings covered in gold stars were both captivating. It is quite amazing to think about the time, expertise, and attention to detail it took to build this Duomo. This may be my favorite Duomo—sorry, Duomo of Florence! 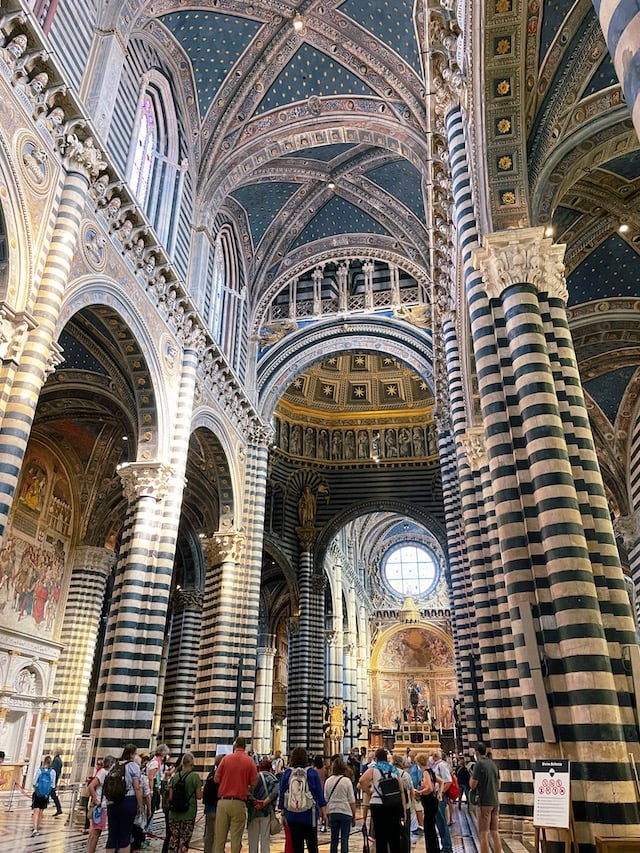 Caption: Interior of the Duomo of Siena.

Donatella explained that we were very fortunate to visit the Duomo at this time because the marble mosaic floor is usually covered to protect it from heavy foot traffic, but it was uncovered at that moment.

In the Duomo there is also a library, and words cannot describe how beautiful it is. The frescos look like they were just freshly painted! 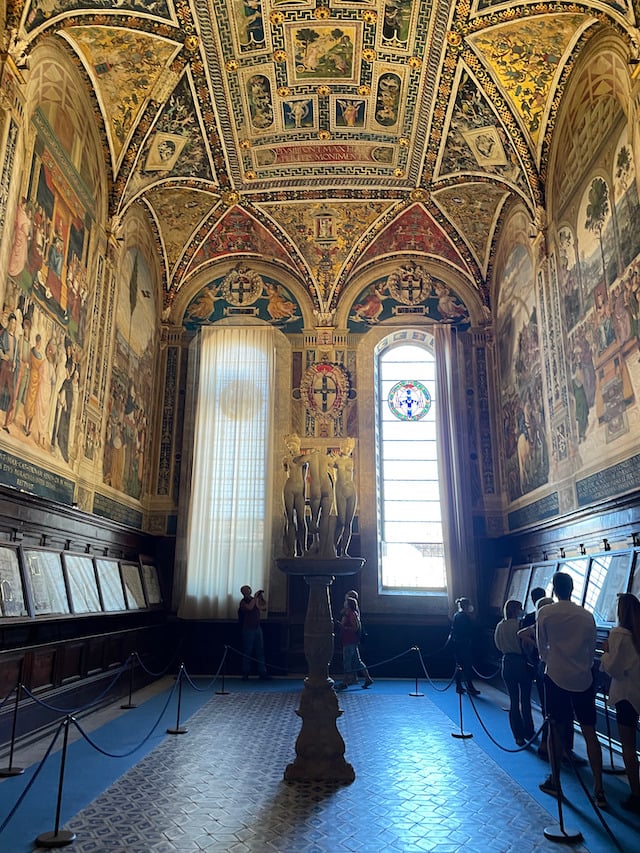 Caption: The library in the Duomo.

We proceed to make our way down to the Piazza del Campo where the famous horse race of Siena is held twice a year. As you can imagine, winning a horse race for your district is an honor. Donatella told us that when her children’s district won, they celebrated for three months with parties and dinners! The crazy part is that she hardly saw her children because she was not allowed to celebrate with them. After all, she is a part of the Porcupine district!

After our tour concluded, I do have to admit I was starving. Donatella recommended one of her favorite restaurants for a true Tuscan meal. At the restaurant, I ordered the pici with beef ragu and it did not disappoint! After stuffing our faces with pici, we walked around the city before returning to the bus for our next stop, San Gimignano! 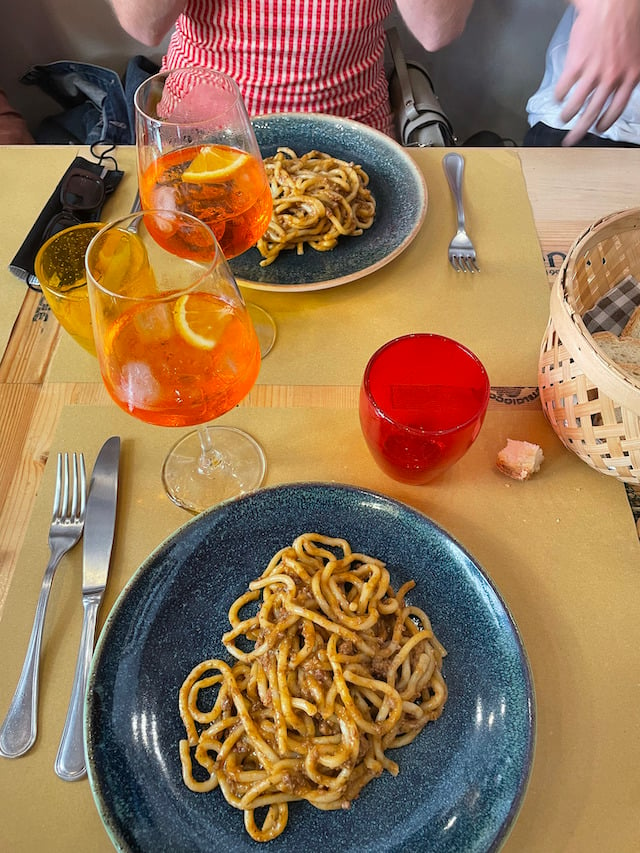 Walking the down streets of San Gimignano makes one feel as if they have traveled to the past! This medieval town was extremely surreal. The first stop we made was at the shop that earned the title of World Champion Gelato Shop from 2006-2008. At Gelateria Dondoli, I got scoops of wild berry and hazelnut, and I saw why they had been crowned world champions. It was absolutely delicious! I was tempted to go back for seconds.

The group then proceeded to a lookout spot of the Tuscan hills. Pictures do not do it justice. The view looked straight out of a postcard! After snapping a few pictures and spending time gazing, we walked back to the bus to head back to Florence. All in all, it was a day packed full of knowledge, with our bellies now packed full of great food. I will definitely return to Siena and San Gimignano (especially for the gelato)! 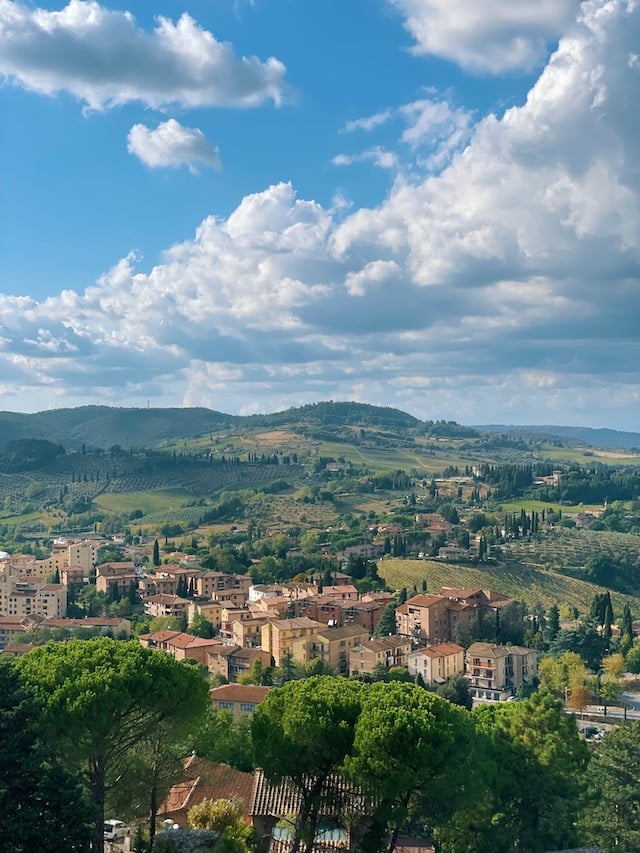 Caption: View from the lookout. 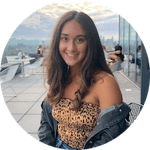 Alexis Miller is an official CAPA blogger for fall 2021, sharing her story in frequent posts on CAPA World. A marketing major from Ursinus College, she is studying abroad in Florence this semester.