Q & A: Studying Abroad as a Person of Color and First-Generation Student

In this week’s blog, Emma interviews her friend Erika, a sophomore from Arizona State University studying abroad with CAPA in Dublin this spring! In her interview she touches on the realities of being a first-generation college student and how her cultural identity has impacted college life both at her home institution and on her study abroad program.

With which ethnicity/ethnicities do you identify?
Mexican and Cuban. On my dad’s side, my Grandma is Mexican and my Grandpa is Cuban. And then on my Mom’s side, they are both Mexican.

And when did your family come to the US?
My dad came to the US when he was 18 and my Mom came when she was 2.

Erika and her friend Micheal warming up in Belfast with hot chocolate.

I did not know how I was going to pay for it until Junior year of high school where I just signed up for a whole bunch of financial aid and scholarships, and I knew if it did not work out with that, my family would honestly go into debt for me. So, I knew I was going to go to college.

As the first one in your family, did you know how to do any of the financial aid stuff?
No. For that, I actually went to my library where they have this program called College Depot for kids who want to go to college, where you can meet with an advisor to help fill out the FAFSA.

And you are studying business law. What do you want to do with that?
I want to be a contract lawyer. So, I want to help people who may not have English as their first language so they don't go into contracts without knowing what they are doing.

A cliff by the sea.

Why did you decide to study abroad?
I knew I wanted to do something outside of the country because I knew I would probably never get a big chance like this in my life. So I thought, “Okay, if I am going to do this, I will do it for a whole semester.”
I did not want to go to a Latin country where everything would be somewhat similar to my life, so I wanted to get completely out of my element.

How did it feel when you first came here as the only student of color?
Kind of jarring, because I knew it was going to be mostly white people, but I thought there would be at least another person of color. Especially with the past couple of years, I was like “Okay, I am really gonna have to just assume that everybody’s cool—cause I am not going to start with, 'Oh, do you guys think I am a valid human being?'” 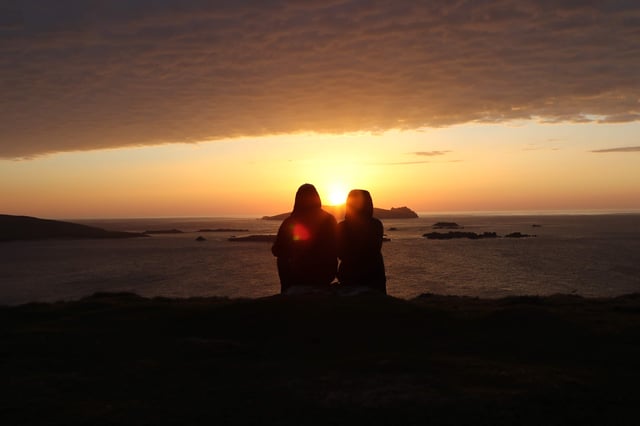 Did you have a similar experience coming from high school to college—which is also a majority white institution?
There were maybe five white people in my high school. So I went from a high school that was majority Mexican and Black, to college which was literally just me and my friends who were brown. That was weird because I was at school five days a week and then I would go home on the weekend. Those five days of the week, I felt really Mexican just because I did not have all the things I would normally have. So I would listen to hardcore Mexican music because I just felt detached. When I am at home, I usually listen to English rap, but when I was in college I mostly listened to Mexican music.

Did you act differently at college?
I think Freshman year of college, I didn't really talk to anyone besides my roommate—who was also Mexican—I didn't feel like I could connect. I was friends with the white kids from my high school; my senior year was mostly with them, but then they also grew up with a bunch of Mexicans so they knew where I was coming from.

Were you afraid that the culture you grew up with would not translate?
Yeah. I mean there were some moments with my high school friends—even with the places we shopped. My white friends would shop at the more expensive malls, and I would shop at the swap meets (a market for everyday life, with clothes and fruit-stands. It is in a parking lot with stalls of different stuff).

You were only in college for 1.5 semesters and now you're here as a sophomore, living amongst only white people who did not grow up close to a Mexican community. Is that hard?
I think my year on campus really helped. Because this is really just an extension of that. Even though I am not home, I still talk to my parents every day. And my whole family has a [chat] group that we talk in.

When I got here, I was hoping to connect to the other ASU students—who I actually do not talk to that much. So then I thought “Okay, maybe I will just hang out with my roommates”—and they all turned out to be really nice. That is how I went on the first day or two, and then I got to know everyone else.

Does it help that Griffith is an international school? Or that we hang out with a lot of the international students?
I think it kind of helps because it's not that we are different colors—it’s really just the different cultures. In that way everyone feels kind of odd...which kind of unifies.

Do you feel Dublin is diverse?
I feel like it was more diverse than I thought it was going to be. I have not had any issues at all—like I have not felt discriminated against at all. 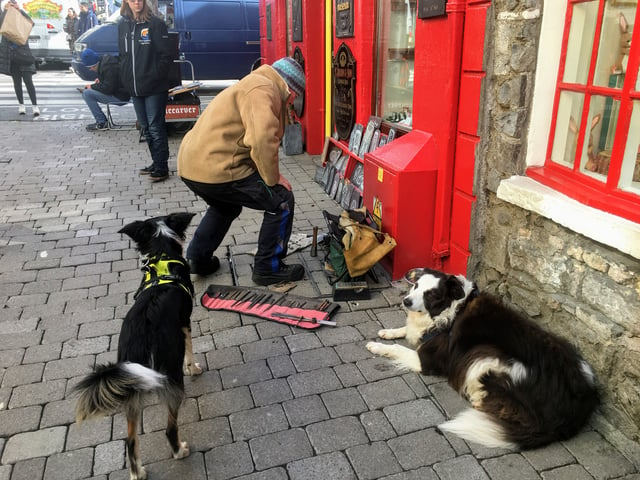 Dogs on the sidewalk in Dublin.

Were you worried that you would feel discriminated against?
Yes, but not from the people in Dublin, but more the people in CAPA because they are from the US.

What do most miss about home?
Well, at the moment, because I am hungry—the food. I was actually just updating the “Food I Miss” list, just adding more stuff to it. When I get home I want chilaquiles—its fried tortilla with chili, eggs, onions, and peppers.

What is the best thing you have had to eat while studying abroad?
In Ireland—something unique to Ireland—it would have to be the bangers and mash, that we had in Galway.

Any advice to students contemplating studying abroad?
I would say do it, just make sure whatever you think the amount of money you need is, double it. And don't go that hard the first month—spend it on more experiences than going out to a club where it is just dark. Go on trips or something. 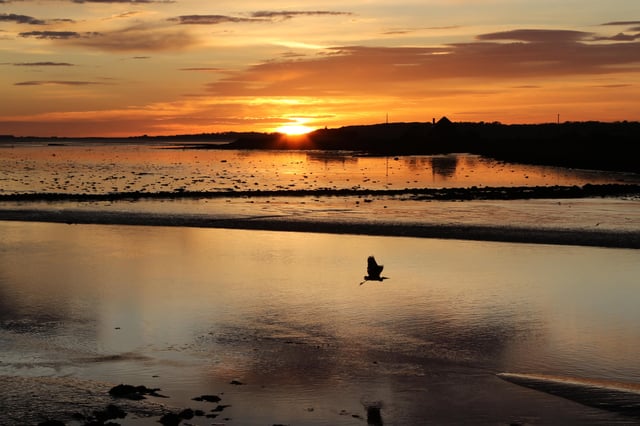 A bird flying during sunset.

What have you learned from this experience?
To just approach things with a clean slate. Not only yourself but give everyone else a clean slate. All those made up assumptions of when you first see somebody—just forget it. I know if I had not done that, I would not have had the nerve to talk to everybody here.

Has it affected the way you view your identity?
If anything, it has kind of solidified stuff, because now I know my stances on stuff and having to see people with other points of view has kind of made me feel like, "Oh, I am pretty sure I am right in my point of view…" Of course everyone can still be right in their point of view, but for me...I just feel more strongly about my views.

I feel more like an American here. In the US, I feel like a Mexican American, but here I feel more like just an American. I think that is because we are exposed to the same things...whereas I realize, "Oh, I was brought up more as an American." Especially when we interact with non-Americans, I realize then I relate way more with the Americans.

Thanks, Emma and Erika!

Emma Aulenback is an official CAPA blogger for spring 2019, sharing her story in weekly posts on CAPA World. A Sociology major at University of Massachusetts, Amherst, she is studying abroad in Dublin this semester.