On Studying & Interning Abroad in Sydney as a Sport Management Major 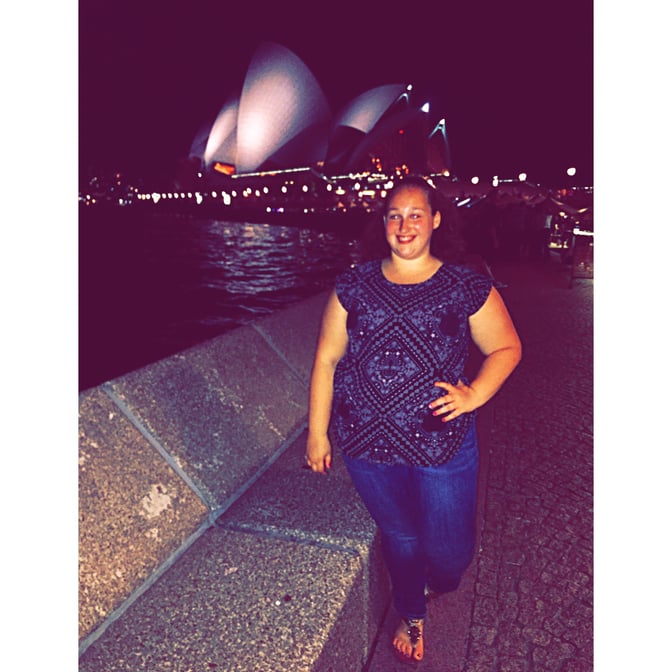 Meet Carly, a sport management major at UMass Amherst who studied abroad in Sydney during spring semester 2016. Below, she talks about how her experience in Sydney led her to discover her interest in her current major, how living in another English speaking country doesn't mean there are no cultural differences, and how stepping out of her comfort zone allowed her to become independent and connect with others on a personal level despite growing up in varying circumstances. 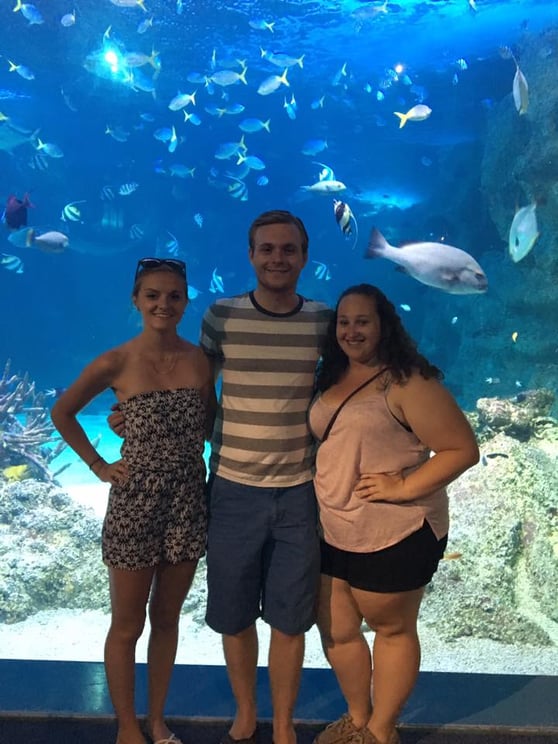 CAPA WORLD: Tell us a bit about yourself.
CARLY SIROTA: I’m Carly and I’m a sport management major at UMass Amherst. Last spring I studied abroad in Sydney, Australia and had the time of my life! I knew before going abroad that I loved traveling and my semester in Sydney proved it! After the semester, I’m back at school finishing up my senior year as I hope to get into sport marketing for my career – an interest which I first got experience in at my CAPA internship. 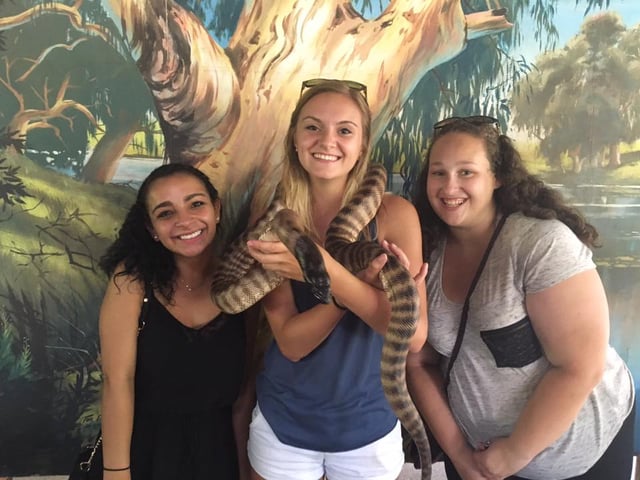 CW: Why did you choose to study abroad with CAPA and why Sydney specifically?
CS: Since entering college, I knew I wanted to go abroad. My requirements were a predominantly English-speaking country (because I’m just terrible with languages) and somewhere with great weather. Close friends of mine had done the CAPA Sydney program and loved it, so I talked to an advisor and I knew CAPA was exactly what I was looking for. The opportunity to complete an internship has such a high value, especially for a business student like myself. And I loved the program style – instead of a traditional exchange – because they coordinate classes, housing, and other important stuff that can be difficult to figure out on your own and in a foreign country. 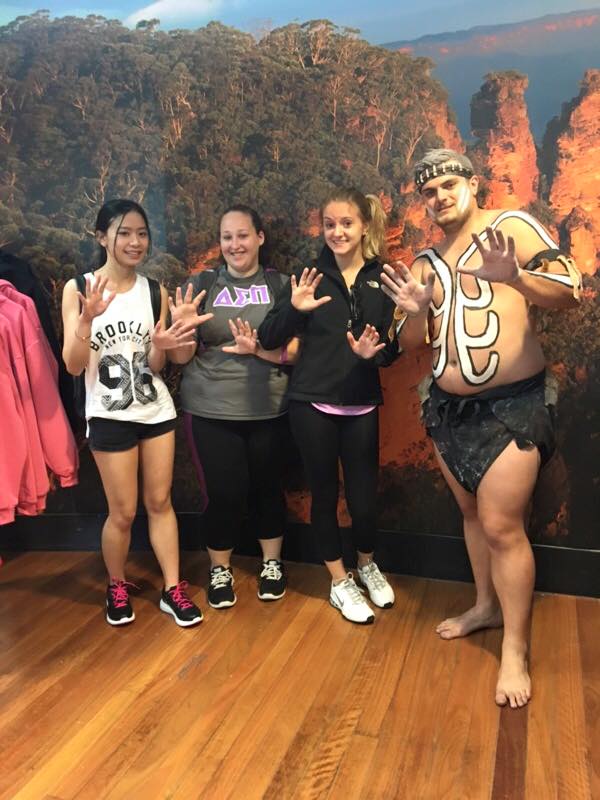 CW: Tell us a bit about your expectations for Sydney and how they compared to the reality. Is there anything you wish you would have known before you traveled?
CS: I expected Sydney to be similar to American cities like New York and it was, which I loved. But the culture of Sydney is much different because of the geography of Australia and the demographic of people living in Sydney. Asian markets and food are almost overwhelming throughout the city. The city is clean and safe and made me feel like I was just another Sydney-sider. With the mixture of Americans and Europeans living, working and traveling through Sydney, you’ll never feel like a tourist in the world-wide melting pot.

Honestly, some of the most surprising things about Sydney were the accents and funny lingo of the residents, as well as the simpler lifestyle. Going to the grocery store will be tough because you won’t have the American-sized selection or name brands you’ve come to love. Even simple American words and phrases like ketchup (they call it tomato sauce), or friend”(they refer to friends as “mates”), will become less familiar as you live in Sydney longer. 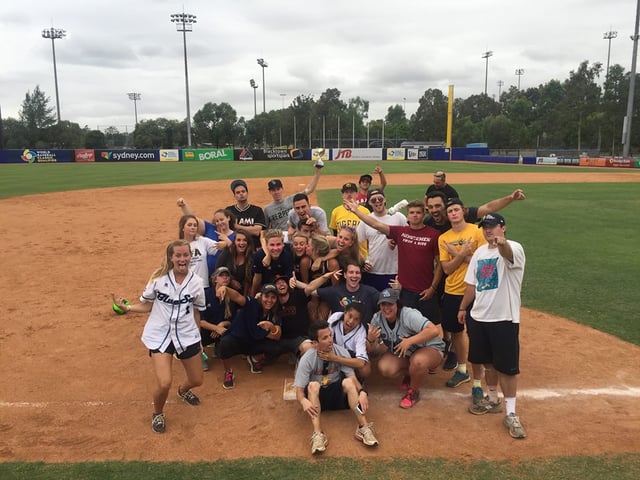 CW: How did you prepare yourself financially for your travels, both before you left and while you were abroad on a budget? What tips can you share with future students?
CS: First, I compared the price of the program and flight with my normal university tuition. This gives you an idea of how much money you’ll be over or under your normal semester budget. Lots of people take out extra loans or hold off on them for the semester to accommodate for this. After booking the flight, plan to spend a certain amount on groceries and entertainment. Keep in mind Sydney is known to be one of the most expensive cities in the world to live in, but the exchange rate is currently great for Americans. After budgeting this amount, I added on an extra $30-50 per week for my budget, just in case.

Something important to look into and plan for is traveling. Obviously, some of your plans could change as you make friends you want to travel with and compromise on where to go. Australia is about the same size as the US so expect similar prices for similar length trips in America (and you can buy flights on international sites in USD). While you’re traveling, most expenses can be made cheaper because of hostels and their cheap prices and deals for food and drinks. If you plan on doing a lot of activities like scuba diving in the Great Barrier Reef or skydiving, those can be a few hundred dollars each. A hard and fast rule is to save up and spoil yourself and enjoy your time because you never know when you’ll get to do these awesome things again. 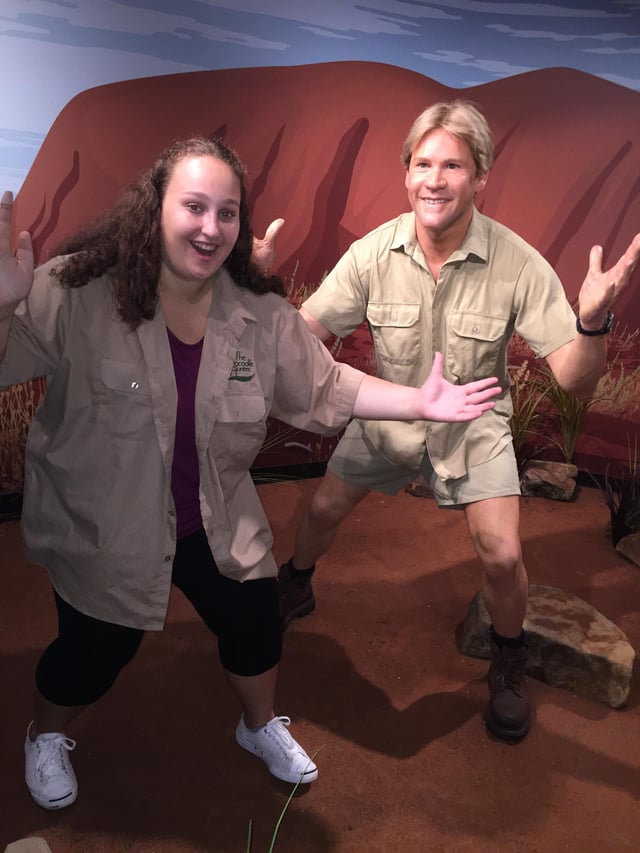 CW: Having been to Sydney and returned, what packing advice do you wish you would have known in advance? What would you have left behind? Anything you would have brought that you didn't?
CS: Many basic household items can be bought at the local mall (which has Target, Kmart and grocery stores). However, if you use specific products or brands, they may not be available in Australia. Do some research or just plan on buying generic/Australian brands. Linens are provided as well as very basic living materials. I visited Sydney in the spring semester which is summer through mid-fall there. The temperature stayed between 70-100 degrees the entire semester. This meant I was wearing shorts and t-shirts most of the time. I brought a rain jacket and light denim jacket and I rarely ever needed anything that heavy. Even at night, the cool air was comfortable. Bring plenty of bathing suits because you’ll want to go to the beach multiple times per week! Even if you visit in winter, don’t plan on being too cold. There is no snow and most people in Sydney don’t own more than a fleece or something equivalent! 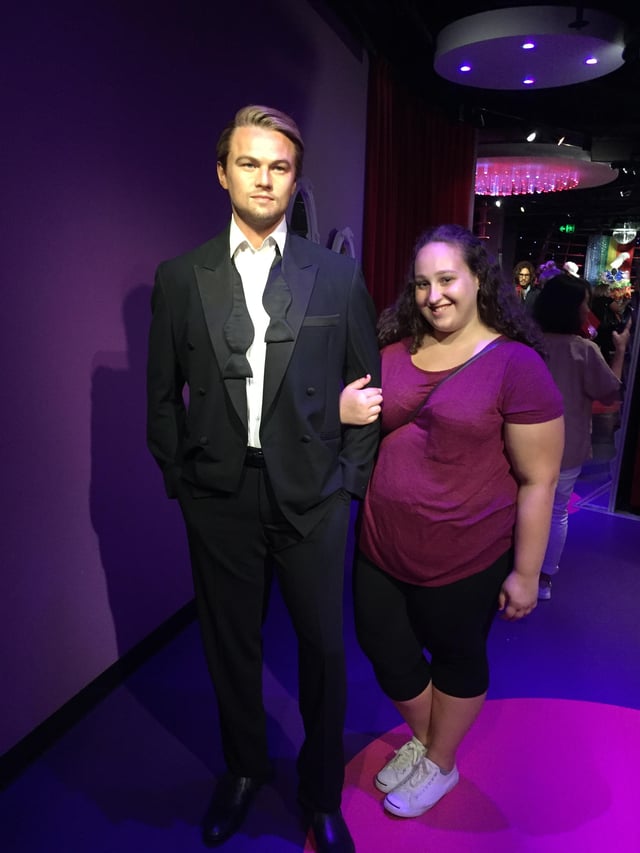 CW: Did you feel prepared for the cultural differences that you found in Sydney? What were some of these that stood out for you? What can future students do in advance to help minimize culture shock?
CS: Sydney reminded me of a lot of American cities so there was barely a culture shock. The biggest change was the prominence of Asian culture as it affects the demographic, food choices, and overall cultural values of Sydney. It’s a great way to try new food and learn about new cultures. I was able to visit the city during Chinese New Year which was an amazing and fun experience that most American cities don’t celebrate. I would say that the Asian culture present is equivalent to the Spanish culture present in American society. Otherwise, I felt right at home immediately. English is spoken (although Australian accents and slang are quite different!) and there are many of the same chain restaurants and stores available throughout the city. 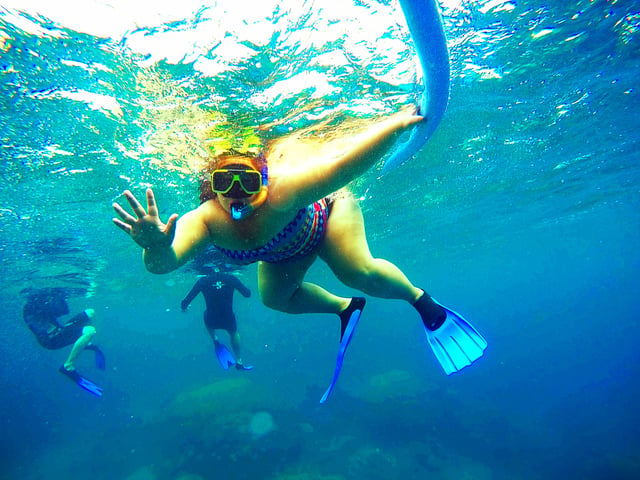 CW: As an sport management major specifically, what would you recommend as must-see or do experiences for other students in Sydney who have similar professional interests?
CS: Sydney is a great sports mecca for the casual fan or sport management major! I interned for the Australian Baseball League and I was able to work with the local Sydney team for a tournament, held at the Sydney 2000 Olympic stadium. Just outside of the city is the rugby stadium. Going to these games was such a great experience. The crowds are wild and the teams are so good! Unlike professional American sports, tickets are very inexpensive for these sports and easy to get too. The rugby stadium has its own train station and general admission tickets are inexpensive. 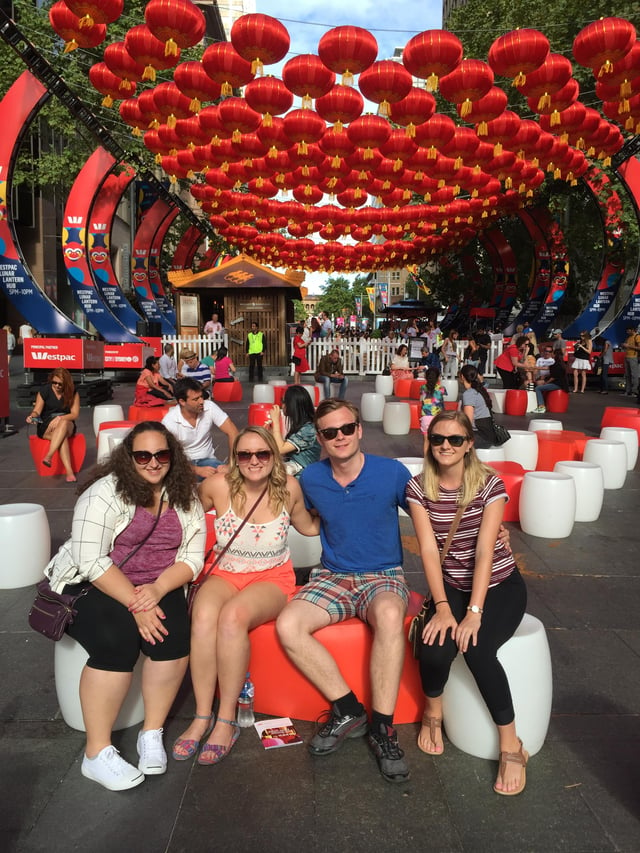 CW: Where were the places you carved out as "Your Sydney " - the places you found outside of the tourist sites, the places that were most meaningful for you? What was special about them?
CS: My favorite places in Sydney were the beaches. There are enough beaches to go to a new one every day for over a year. All of them are unique, but equally beautiful. There’s white sand, clear blue water, and clean and safe environments. Connecting the beaches are coastal walks ranging in difficulty. Exploring this beautiful part of Sydney took up most of my weekends. Even on days when it was too cold to go swimming, I was still enjoying the sun and views that are unlike anything I’ve ever seen in America. 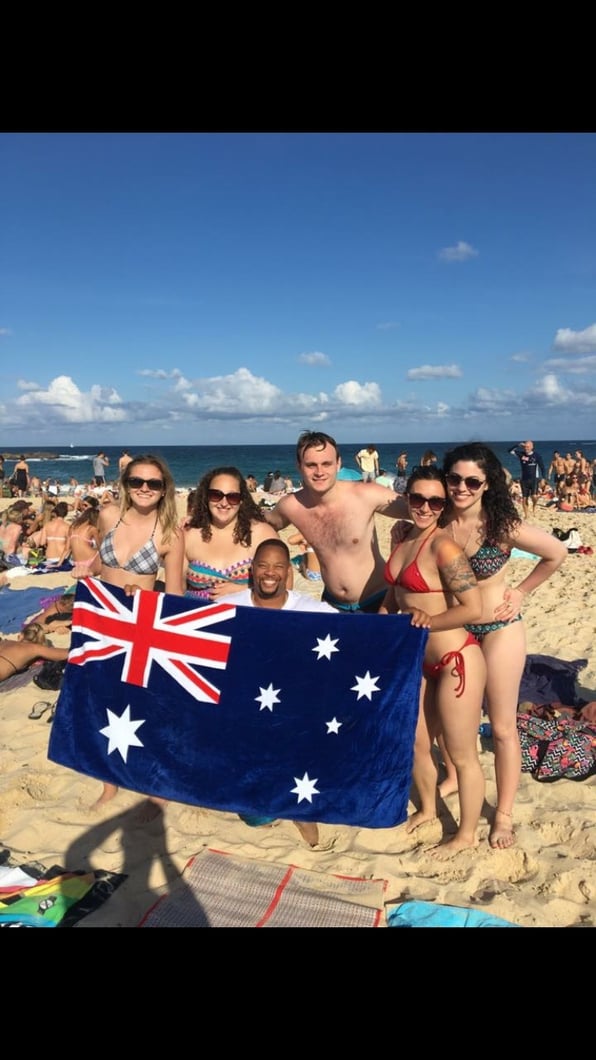 CW: Where do you see yourself taking your career over the next few years? Did your experience abroad in any way shape your career goals and aspirations?
CS: I hope to graduate with a career starting in sport marketing. Fortunately, my internship abroad began this career. It was my first sport marketing internship and I was able to see how much I love working in the field. Not only did I love my job, but I loved learning about the similarities and differences between marketing to Australians versus Americans. 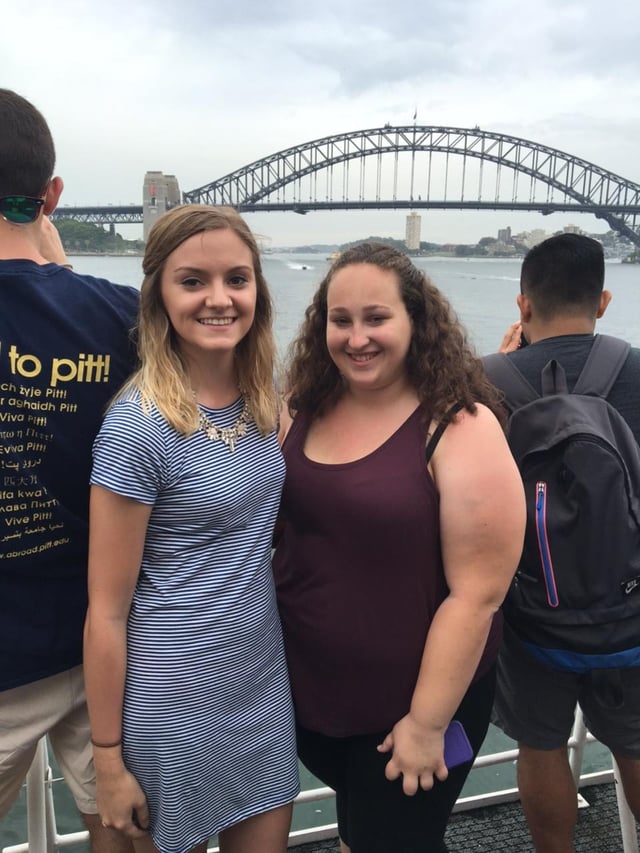 CW:What changes have you seen in yourself since you began your study abroad program? What has your experience taught you about yourself, the world around you and some of the larger global issues?
CS: Studying abroad took me out of my comfort zone. I became independent and did so many things I never would have done had I stayed at school for a semester. I was able to meet so many different types of people and learn more about the world on a personal level. I know how much more I want to travel and exactly where I want to go. I felt so close to some Australians I met even though we grew up with very different lives in very different places around the world.