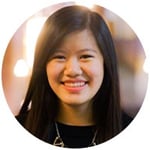 In this week's post, Jolena gets acquainted with Shanghai and shares her observations about this big city.

It's been a week and a day since arriving in Shanghai and things have been pretty wild. But at this point in time I'd like to say that I feel pretty integrated which is surprising. I didn't think I'd get the hang of things this early on.

The first couple of days we had CAPA orientation. We were shown around campus and the city and were briefed on our classes for the semester. We got to know where to buy our basic necessities, and we ate good local food! We ended the four-day "orientation" by going to the Bund—probably the most iconic view of Shanghai.

I'm honestly not even sure what to say because things have been a whirlwind. I guess I'll mention some "culture shock," or things I found interesting since coming to China. 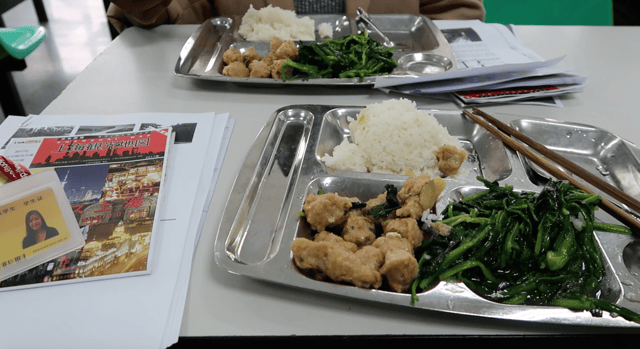 First off, the cafeteria. I've talked to the other students on the trip, and we all agree that at American universities we tend to stray from our local dining hall. The food in the U.S. isn't so healthy, and it is also super repetitive. Here, the international dorm is right next to the main cafeteria of ECNU's campus. At the cafeteria I average around 13 RMB for lunch and dinner, and 2 RMB for breakfast. If 6 RMB is about $1 USD, that means I'm spending a dollar or two on each meal. So how's the food? Pretty good for $2. There are many options of meats, vegetables, noodles, bread, and rice. Along with this, there are two floors of food, and three sections of different foods between these three floors! I could probably get a new dish every single day during my stay here, which is wild. There are lots more I could say, but let's move on.

At home I go to the University of Pittsburgh and I live by Philly. In Pittsburgh we've got a great bus system called Port Authority, and in Philly we use Septa for trains and buses. I always thought Port Authority was so convenient, until I came to Shanghai. They have a bus system, but what amazes me are their subways. Even better—the high-speed rail. What I've used most is the subway, and it's just super convenient to get just about anywhere! We have subway cards that we just scan as we get on or off, and they have kiosks to top them up at every station. All of this was super intimidating at first, but after one week, I feel like I can figure my way around like a pro.

Yesterday we went on an excursion to Suzhou and took the high-speed rail—it was like no other. I read that the train can go up to 217 MPH! It took us 25 minutes to get to another city which typically would take hours by the regular train or car. It was also pretty cheap, which was great. The station looked like an airport which was really interesting. Overall, I don't think I'll be able to look at the Port Authority the same when I get back to Pittsburgh.

One last interesting aspect of Shanghai is the pretty modern lifestyle and convenience of things. I'm going to contradict myself first. Coming from the East coast, I am very impatient and pretty fast-paced. Shanghai is a very populated city and when I walk along the streets I feel like I'm always waiting for slow walkers or waiting in lines. I suppose this can't be helped for a city with millions. Besides this, the general lifestyle of Shanghai is modern. I've realized that there is no need to carry a wallet; when you've got WeChat Pay or AliPay, your phone is your wallet. My friend Luisa and I ended up at a food court that only accepted WePay our first day in Shanghai. We were turned away even though we were holding money! You can use these apps to buy anything from almost anywhere—grocery stores, clothing stores, even to pay bills and rent! 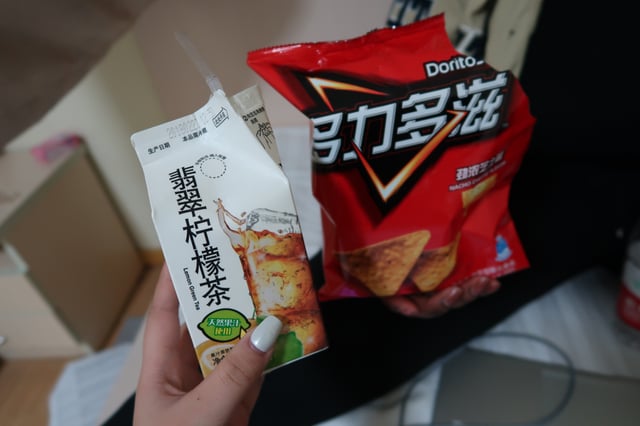 Also, I love that we have convenience stores close by that are 24-hours. If I have a midnight snack craving, we have a FamilyMart on campus that has so many different snack foods and drinks! Since I'm mentioning drinks, the options here are unreal. They have so many different juices, teas, and sodas. Like the cafeteria, I feel like I could buy a new drink every day of the semester there are just that many options. Something I have yet to figure out is ordering delivery. I believe McDonald's has either late night or 24-hour delivery, which is crazy. Other restaurants also allow this, so hopefully when I figure it out I'll be able to update! Altogether, I think that these couple of aspects really show how advanced China is in some ways.

I could definitely go on about cool things I've noticed about China, but these are some of the main ones for now! Until next time!