Words by Chelsea Zybach, an undergraduate at the University of Washington, in the Foster School of Business, who is studying in Shanghai with CAPA this summer. Here she reflects on the impressions this global city has left on her.

In the United States, there is a distinct image of China fixed in the minds of every person who has never visited it. This image leaves no room for well-dressed men and women hurrying down shop-lined sidewalks under green trees and ten-story buildings.

The best way to fix this is to send these poor unsuspecting westerners to the Jing An Temple Area and West Nanjing Road. The historic Buddhist Temple is adorned with gold figurines in the forms of animals, and surrounded by perfectly modern apartment buildings, restaurants and shops. A short walk away is the incredible row of soaring malls and shopping centers on West Nanjing Road. 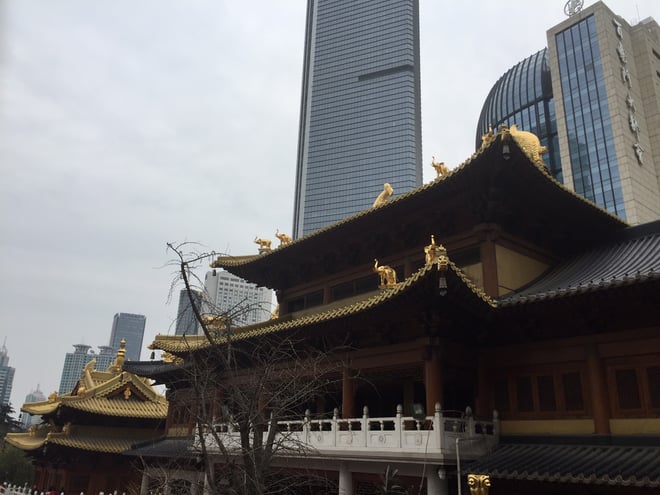 Photo: Contrasts of Jing An Temple and West Nanjing Road

As well as boasting the biggest Apple store in the world, it has an assortment of high-end fashion retailers like Jimmy Choo and quality sporting apparel stores like Nike. The power of these two adjacent areas is that they are at once very traditional and modern Chinese, obliterating any confidence you might have had that you could categorize Shanghai as one or the other.

However, my favorite part of the recent CAPA-guided excursion to this part of the city was the Yu Yuan, a sprawling traditional garden in the Old City area. Being from the US, it’s hard to imagine that an assortment of positioned rocks could be as peaceful and beautiful as they appeared in the mossy, quiet courtyards of the Yu Garden. 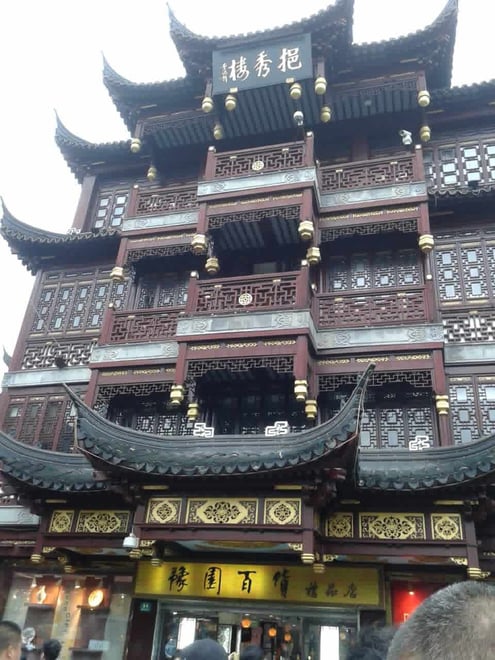 As shimmering goldfish swam in the green water below us, we could almost forget that beyond the white stone walls and red brick paths, the metropolis of Shanghai continued to swarm and hurry. But as soon as we exited the garden, the souvenir vendors and the Starbucks housed in the historic-style buildings reminded us that no area is fully immune to the march of progress.

Photo: Rockery in the Yu Garden

This adventure into Shanghai was a fantastic awakening to the tension between old and new coexisting in an urbanizing environment.

Later during our stay, we visited the water city of Qibao just two metro lines away from campus. Despite the rain, it was a charming place with the same contradictory mix of modern and ancient buildings as can be found in the nooks and crannies of Shanghai. 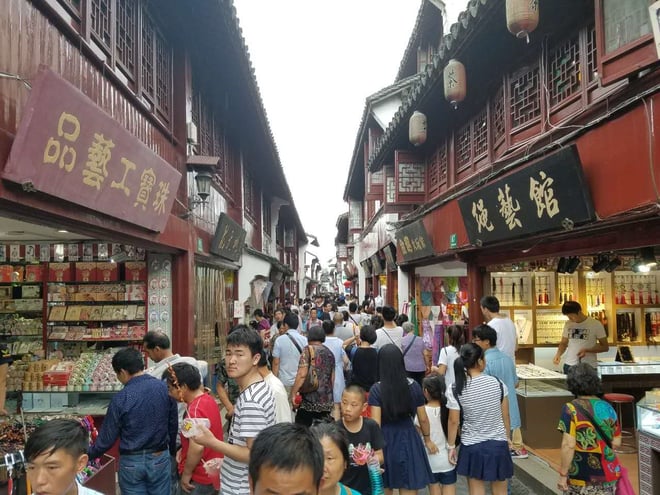 We walked through the narrow alleys of gift shops and food stalls selling "xiao chi," generally finger foods or snacks. On a side street away from the crowd was the Qibao Temple, filled with statues of various deities welcoming patrons.

It was here that we learned it is bad manners to step on the raised wooden thresholds that seem to lurk in every entryway in China; I've tripped over more than I can count. After leaving the quiet of the temple we enjoyed a traditional Chinese tea overlooking one of the canals running through the city. 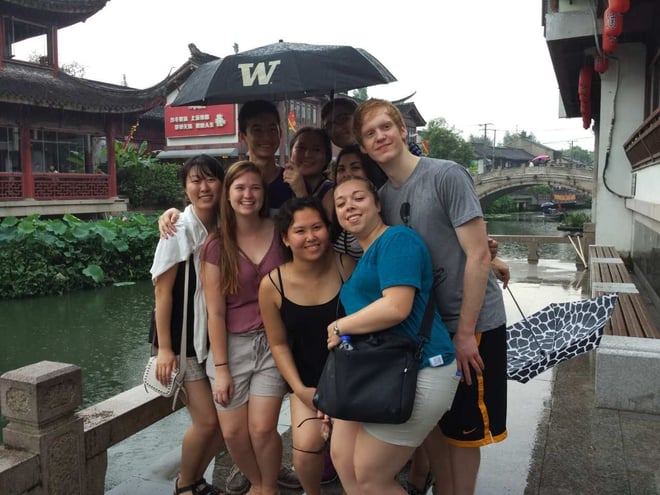 Photo: With friends in the watertown

Surprisingly, Qibao was free of anything too "Western." Not a single mall or high-end retailer has found its way to the heart of this area, unlike the Jing An Temple or Yu Yuan. A short walk and a right turn reveals developing high rises very close by. Regardless, given that the majority of visitors that day were local families, I believe Qibao will be protected as an historic treasure for a long time and as a reminder of the role of watertowns in Shanghai's history.