In this week's post, Brandon shares how he spent his weekend visiting the National Gallery of Ireland and hiking in Glendalough.

Last weekend most of my friends went on their own trips about Ireland, so I decided to spend my time doing some adventuring by myself. I think that a big part of studying abroad is traveling on your own and feeling more independent, as you are in a whole other culture and country, separated from your traditional friend and support network. In that vein, I went to the National Gallery of Ireland and walked about the Temple Bar district a bit on Saturday, and then took a day-trip to Glendalough on Sunday.

The National Gallery of Ireland is in the formerly British, aristocratic area of Dublin, surrounded by impressive, four-story Georgian apartments that contrast beautifully with the single-story, red-brick row houses around Griffith College. The museum has no admission fee, which is excellent for a college student like me. It contains the national selection of Irish and European art, with a particular emphasis on Irish paintings and Italian Baroque and Dutch masters. 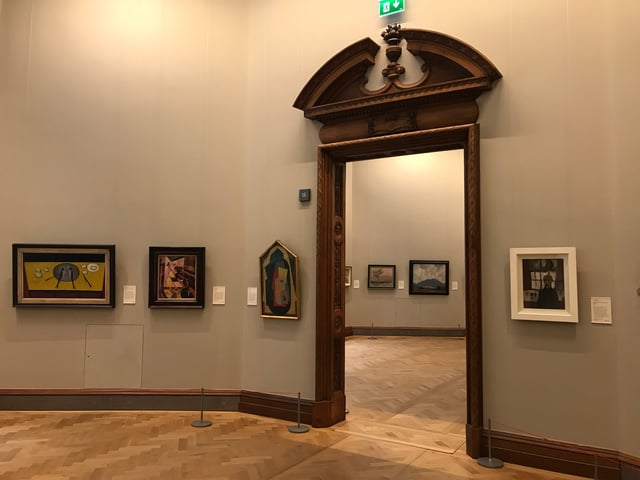 I am personally not a huge fan of either of these art movements, but it was still a pleasant way to spend a Saturday. I had never seen specifically Irish paintings before, so that was particularly interesting. The entire collection takes around three to four hours to see fully. There is an exhibit on stained glass windows from churches that I found to be very beautiful, with the entire room being kept in the dark and lights illuminating the stained glass from behind. 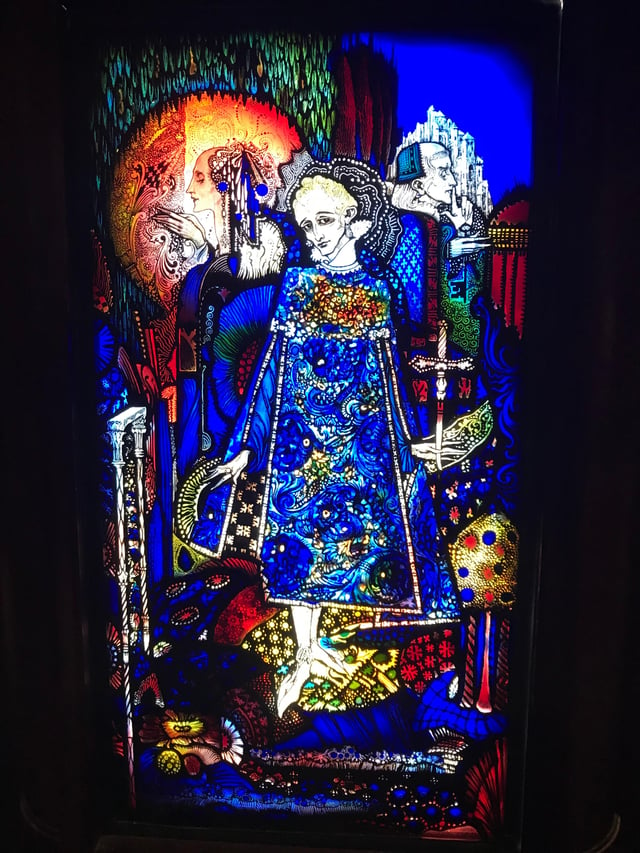 After leaving the museum, I decided to take the long way back to Griffith, passing through the Temple Bar district and walking past Christchurch Cathedral. I got a falafel from Umi Falafel, which was very good and not pricey at all, costing only six euros! I also stopped in at Leo Burdock Fish and Chips, which is a little hole-in-the-wall restaurant near Christchurch that has been serving Dublin since 1913. They gave me a large portion of fried cod and thick-cut French fries sprinkled with salt and vinegar, and it really hit the spot after all the walking I had done previously. I can't suggest these two restaurants enough. 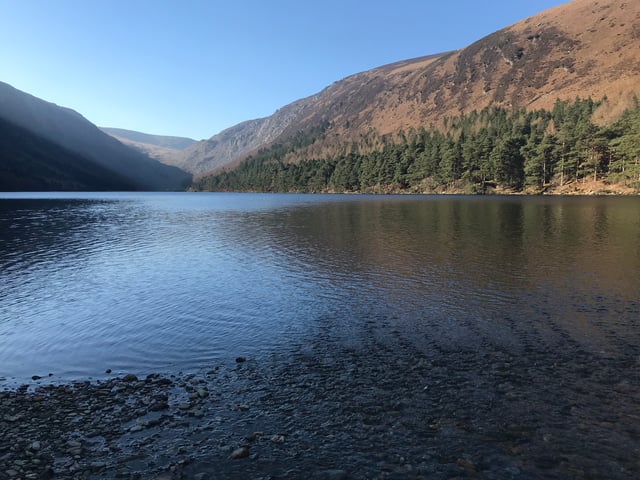 From the shores of the Upper Lake in Glendalough looking toward the lead, mine, boulder field and the foothills.

I woke up early on Sunday for a day of solo hiking in Glendalough, which is a glacial valley in Wicklow about an hour's bus ride south of Dublin. I would suggest to any would-be travelers to check the itinerary of whatever transport service you are using because I walked all the way to the appointed bus stop only to realize that I was an hour-and-a-half early. Putting aside this slight annoyance, I soon was on the bus to Glendalough. I had not seen any of the Irish countryside up to this point, as I have only been to fairly urban areas directly bordering Dublin. However, once you pass Bray (about a 45-minute ride from Dublin center), the buildings are replaced by rolling hills and smaller homes. It was exciting to see a side of Ireland that was more rural than the sprawling complex of Dublin.

Cemetery and round tower of the monastic city.

Glendalough is most famous for its monastic city in the lower valley. I must say that when I heard "city," I was expecting something much larger, but now that I reflect, I realize that large buildings and grandeur would not fit 6th century Christian monks. The actual monastic settlement is well-preserved, with a large, roof-less cathedral that fell out of use in 1214 and a soaring tower used as both a bell tower and as refuge from marauders. The tower can be seen from all about the lower valley, along with a small, intact church not far away with a much shorter belfry tower. The entire monastic city is an extensive cemetery, with both incredibly ancient and very recent headstones planted in the grass. 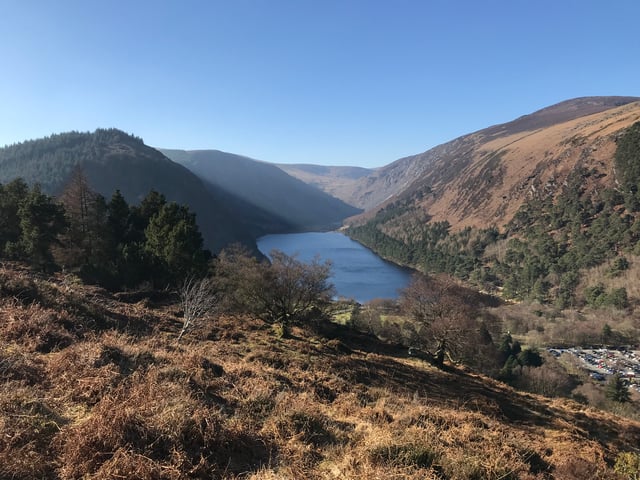 Once you leave the monastic city and move onto the main, paved hiking path, you are soon surrounded by beautiful woodlands. The valley walls are extremely steep and rise up above you, and there are thin game trails breaking off from the main path that you can scramble up for better views. I scaled both sides of the mountain valley to get some of the pictures you see, and the expanse of Glendalough is breathtaking. 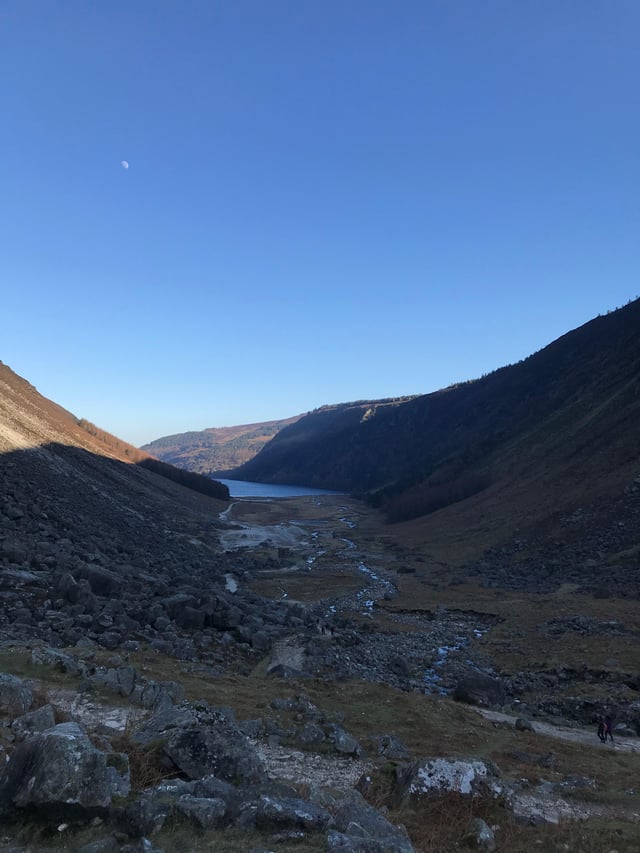 The upper valley has a large lake that the main path circles and then carries up a boulder field where a lead mine used to be before the 19th century. I did not make it up into the larger expanse of foothills above the boulder field, but I plan on returning to hike further in the coming months.

I hope you enjoyed this entry about the National Gallery of Ireland and Glendalough! When I return for further hiking in Glendalough I will be sure to include a few pictures, as the scenery is spectacular. Have a good week!