Stories of Our Own: Memories Made with CAPA Dublin in Spring 2019

In this week’s post, a group CAPA Dublin students each reflect on their favorite memories and transformative moments during their Spring 2019 semester abroad in Dublin.

I think my favorite memory was on our second day in Dublin when we went to get our Leap cards at Trinity College. I remember it just being a crazy day. It started when half of our group got separated and walked almost a mile away from Trinity in the wrong direction. Once we found our Leap cards, it was our chance to explore downtown Dublin by ourselves. I remember a group of us went off to get sim cards for our phones solely using the verbal directions given to us by our program leader. We were supposed to go to O’Connell street which is extremely hard to miss given the huge “Spire” in the middle of it (it is EXTREMELY hard to miss) but somehow we did. To this day, I have no idea where we ended up, but it was nowhere close to our destination. After eventually finding a phone store, we ended our day with dinner, a pint, and news that the airport found my luggage.

Although it is silly and really irrelevant, it makes me realize how far I have come and grown since coming to Ireland. I could find Trinity and that store on O’Connell street with my eyes closed now. And it’s funny to me to think of a time where I didn’t know where those places were. But being lost, confused, and laughing the entire time with some amazing people was a memorable introduction to the city that I have fallen in love with. 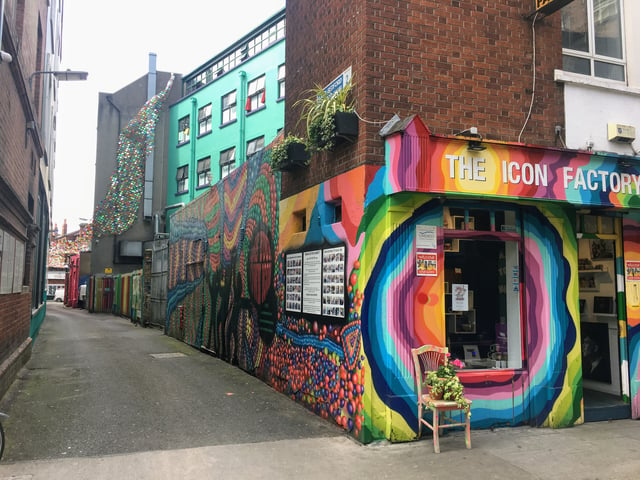 The talent displayed throughout this city is truly unforgettable!

I think my favorite memories have been all the traveling I've gotten to do! Something I've learned is how to better interact with other cultures!

For me, it is forever going to be the first excursion we did together before “snail” was 🐌 (that is the title of our WhatsApp group message)...when we went to Giant's Causeway and none of us really knew each other! We heard from Lydia and Jordan that day trips were a thing, so we booked our tickets and woke up super early to catch that bus at 7:30AM on O’Connell Street. And that bus ride was full of us in complete fits of laughter every 5 minutes... especially when we all learned of Ellie's love of corgis. 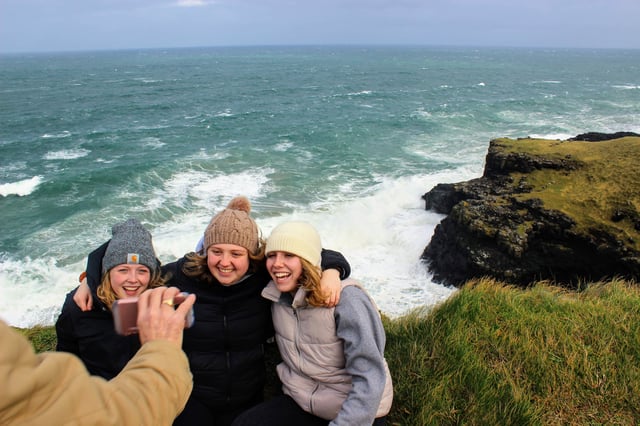 Watching friendships form before our eyes.

Exploring Bray, Ireland, with my friends. Bray is this cute beach town about an hour away from Dublin via bus. We ended up taking the bus to Bray and doing the cliff walk from there to Greystone which is the neighboring town. This happened during our second week here. I was having a really hard time adjusting and was extremely homesick. But once we got to the top of the cliff and I saw how beautiful it all was, I became really emotional about being in such a beautiful place with really amazing people. I think this is my favorite memory because it opened my eyes to all of the positivity and beauty my new life here could have once I moved past the homesickness.

My favorite memory would probably have to be getting lost in Naples and then trying to figure out how to get back. I went by myself so I did not really know where I was going and I could not speak the language. I got on the wrong train and it was just—I don't know—it was cool meeting people from the area who were so nice and just wanted to help. 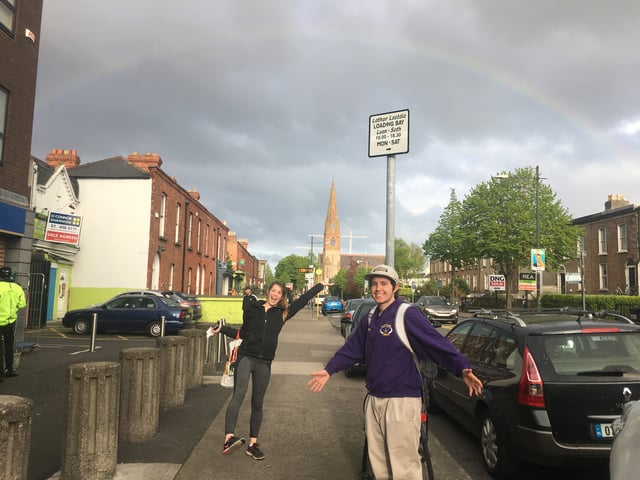 I would say my favorite memory was wandering around the city on St. Patrick’s Day. The city just felt so alive with people who were there for a fun and exciting time, and it seemed like Irish culture at its peak. As far as lessons learned, I would say that I learned how important it is to step outside my comfort zone. My recommendation for future CAPA students would be to do things that make you uncomfortable. Go somewhere off the beaten path (like my trip to Morocco), make friends from other countries, and try crazy foods. Often the experiences that seem the scariest or the most different end up being the most memorable.

As a huge fan of the movie P.S. I Love You, walking into Wheelan’s Pub for the first time was pretty amazing! 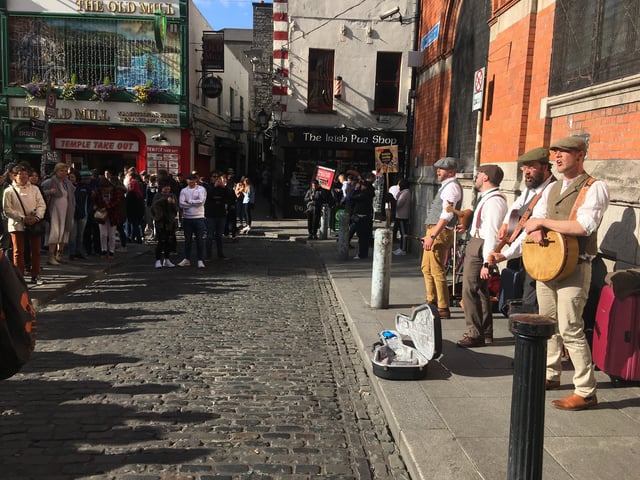 One can find good live music just up the road at Wheelan's!  Or, just on the road!

I think my favorite memory had to be when my friends and I went to Sinnots Bar to watch the Six Nations Tournament between Ireland and England. It was one of the first weeks here and I was kind of struggling to find my place. I knew I liked Dublin but at the time, I was going through a phase where I felt like I didn't belong here. But this had to be my favorite memory because it was the first time that I felt like I fit in here. I play rugby at my home college (shoutout to Merrimack College Woman's Rugby) and I really missed my team. Not many people know how rugby works or the rules to it. But being in that bar, for arguably one of the biggest games of the tournament, was so exciting. I knew what was happening and so did the fans around me so I felt included. I'm used to cheering and no one knows what's going on. So it was a super cool experience for me that I will cherish forever. 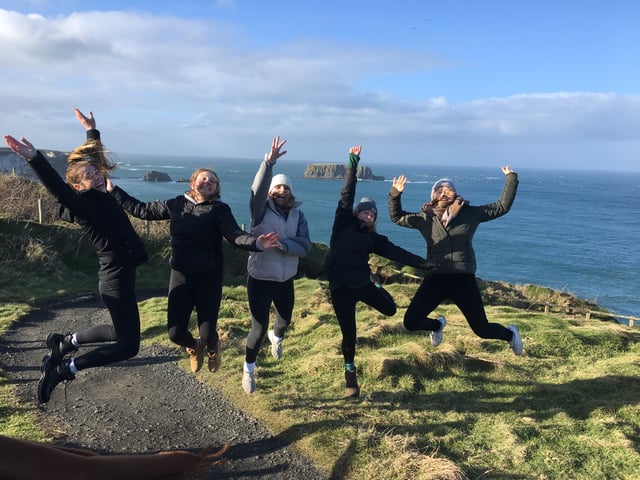 One of my favorite memories was when a group of us had a Potluck Dinner Party...turned out to be a random but awesome mix of food (and fun)!

While I loved being out and about in the city, my favorite memories in Dublin happened within our common rooms. It was here that I laughed the hardest with my roommates during our kitchen conversations! Or where we would pop our heads out the window to chat with the rooms next door. One afternoon, I walked in to find my flatmate, McKenzie, blasting her 80’s playlist—and we danced until the sun went down!

I was on the 151 bus coming home from my internship sitting in the very front seat at the top. The seat where nothing is in front of you but glass and you can see the whole city going by. My internship bus stop happened to be the first one on the route and I’d always run out of the office so I could snag that seat and watch the world going by. My stop was approaching and I got up and made way down the bus stairs. I got off and was walking down the street when I heard someone screaming “Miss, miss” behind me. I ignored it and kept walking. Then I felt a tap on my shoulder and a man from the bus had my credit card in his hand. He handed it to me and then ran back on the bus which was waiting for him. I was so shocked that someone had did something so kind for me that I forgot to even say thank you. I watched the bus pull away and the man who gave me back my card waved. I waved back and mouthed thank you. Such a simple act of kindness stuck with me for the entire day. Even to this day the generosity of that kind man still makes me smile.

Thanks Emma and friends! 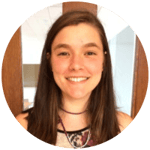 Emma Aulenback is an official CAPA blogger for spring 2019, sharing her story in weekly posts on CAPA World. A Sociology major at University of Massachusetts, Amherst, she is studying abroad in Dublin this semester.