In this week's post, Joyce talks about the elective class she took as part of her CAPA program.

I came to London to complete an internship as part of the CAPA program and a 3-credit course must be completed alongside the internship. I have already completed all my electives from my home school, but I was very interested in interning abroad. I was open-minded about the one additional elective I would take with CAPA. I had one course in mind but, upon arrival, I didn’t quite appreciate the times those classes were being offered. I asked the CAPA academics team to change my schedule to work with what was best for my internship schedule. They were very helpful and accommodating. I ended up only having to commute to CAPA twice a week. I spend two and a half days at my internship and a day and a half at CAPA, leaving a whole weekday free to do what I like. I wouldn’t have had it any other way.

Electives are always interesting classes to me. They are a chance to learn things outside of my major. They often bring me different points of view in matters I never thought about too much. Some electives I’ve taken in the past have opened up whole new worlds for me. I was excited to see what CAPA had to offer.

I ended up in a psychology class in child development. As a science major, I’m not used to having much discussion in classes. This class challenged me to think about things like: What is childhood? Is childhood universal? How have things changed? What is best child development? All are questions I never really thought about before. As part of the coursework, we looked at many research studies pertaining to child development.

My favorite classes were the ones where we went on field trips. Most CAPA classes will have field trips incorporated. These allow students to see what London has to offer beyond what's learned in the classroom. My flatmate’s class goes on a field trip almost every week! My class offered two.

The first trip was to the Victoria and Albert Museum of Childhood. 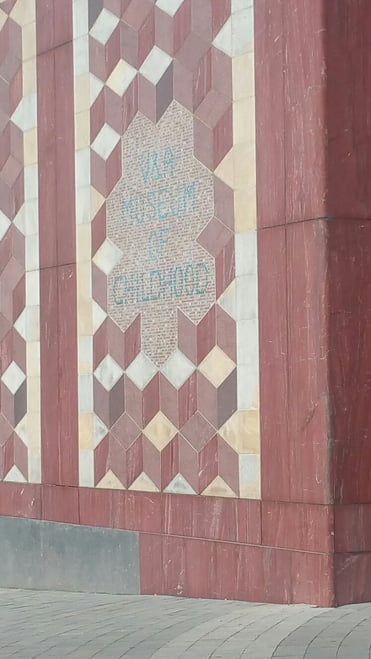 The professor prompted us to think about some things while we explored this museum. What has changed? What has stayed the same? This was a new way of approaching museums for me. I often visited the free museums around London to see what they had to offer. Having a question in mind when visiting museums can allow you to look deeper into what it is you are admiring behind exhibitions.

I noticed that the concept of the toy remained relatively similar over time. A baby’s first toy often is used to stimulate the senses. This is part of the development of childhood. The museum had many cases of toys from the “look-see’ category that triggered visual stimulation. I also noticed costume play to remain the same in concept. Costume play for children often related to career options in the future. The military costumes for boys and nurse costumes for girls were always common. These can be found today as well. The quality of toys, however, has changed very much over time. The old toys were often made from expensive materials and the details on the toys were absolutely stunning. Today’s toys are often mass-produced with much cheaper quality materials. 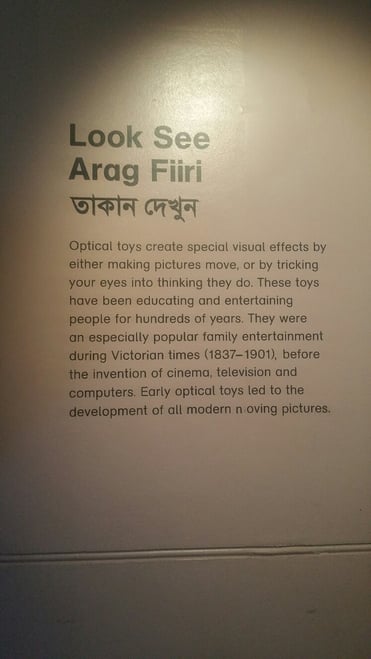 We’ve come a long way in terms of childhood health and safety. Here is a picture of a baby’s high chair. Look at how there is no seat belt or any other securing device for the baby! 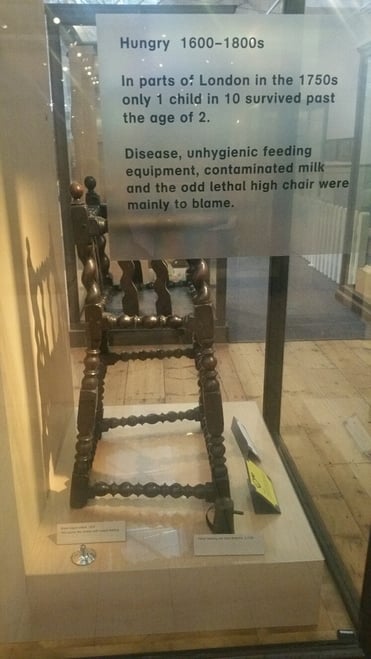 We went to the Foundling Museum the following week. This museum looks at the history of the Foundling Hospital, which was UK’s first children’s charity and first public art gallery. This place was established in the 1700s to care for babies at risk of abandonment. The hospital fostered children for over 275 years. 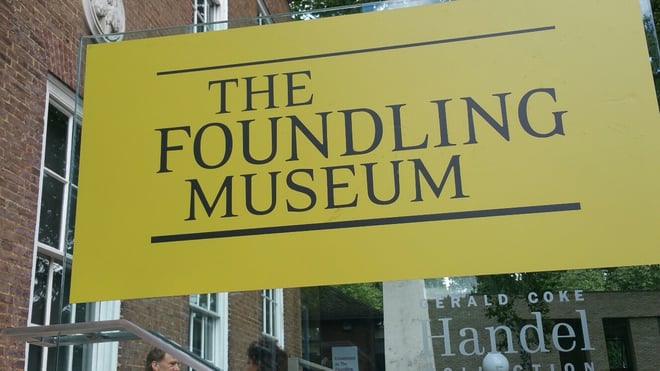 The art gallery was used to raise money to support the children. Displays in the Foundling Museum included a painting of Gin Lane as well as many other artifacts from the children who lived at the hospital.

We had a discussion in class about the museum. I learned about the system through which the babies were chosen for hospital admission, which was much like a lucky draw as long as the child was healthy. The professor asked us to share one thing we learned from the Foundling Museum when we returned to class the following week. I didn’t realize that parents were allowed to pick up their child after they made the decision to drop them off at the hospital. If they showed proof of means to support the child, parents are allowed to bring the child home again.

I’ve learned so many things from the course that never would have crossed my mind. Electives are a great way to learn something outside of your major. Thanks, CAPA, for the great opportunity.