We’ve just launched an exciting new study abroad program with Maynooth University of Ireland. Go abroad on this program and you’ll learn, live, and enjoy Irish culture like a local in a traditional campus environment. Maynooth is the country’s only university town and you’ll also have easy access to the global city of Dublin, just a short train journey away. CAPA students can now enroll directly with the university during spring and fall terms. 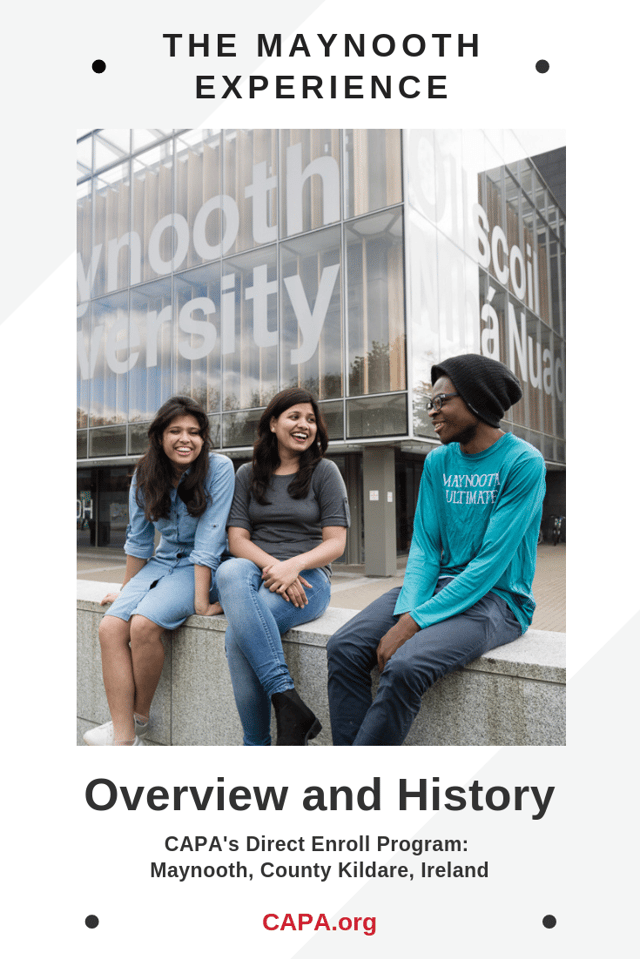 Read on for an overview of the experience you could expect when you study on the CAPA Maynooth University program, from the academics to the campus life and the local area, and a bit about the history of the university, which traces its roots all the way back to 1795.

The Maynooth University Experience: An Overview

Maynooth University was voted Ireland’s friendliest college, so you’re sure to receive a warm welcome. It’s also truly a university town; around the same number of students as locals call the town of Maynooth home.

While a diverse mix of ethnicities, religions, and nationalities make up the student body, with more than 90 countries represented, 90% of the 11,000 students are Irish, so you’ll have opportunities to connect with both the international crowd and the local culture in a truly authentic way.

The university ranked #50 this year in the Times Higher Education World University Rankings of the global top 100 universities under 50 years old. Part of the National University of Ireland, it’s a dynamic and engaging place to study with an interdisciplinary approach to academics, and it’s growing quickly. 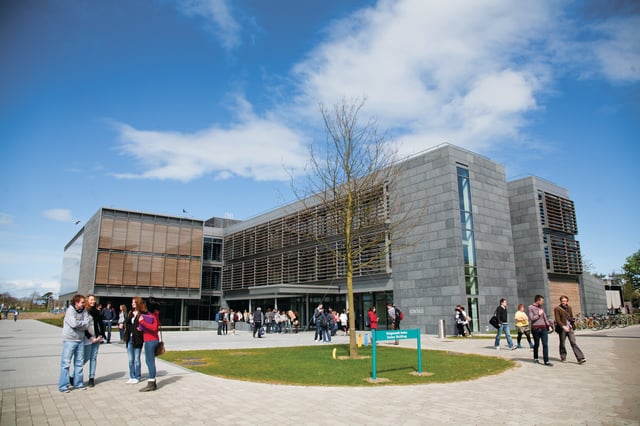 There are two campuses at Maynooth, where you’ll find a mix of historical and modern buildings. The campuses are split only by a small street and you’ll walk from your dorm room to your furthest classes, the student union, fitness facilities, and the main restaurant, in no more than seven minutes. Even while exploring the town, you’ll become quickly become familiar with the layout and be able to find your way around without getting lost. You’re very likely to spot familiar faces everywhere you go.

As an international student, you’ll be guaranteed on-campus housing in a single room with an ensuite bathroom in an apartment style setting with a communal kitchen. You’ll live with other semester students from across the globe. You could also choose a homestay within commuting distance from campus.

Maynooth is a safe place, and you’ll find plenty of support here, from academics to student services to health (fun fact: it’s the only university in Ireland with free access to doctors and nurses during the week). You’ll also find an inclusive campus, where more than 6% of students have a disability, and there’s a comprehensive system of support in place.

If you ever feel like a change in scenery, you can be in Dublin within 45 minutes on the train, so you really do have the best of both worlds here. 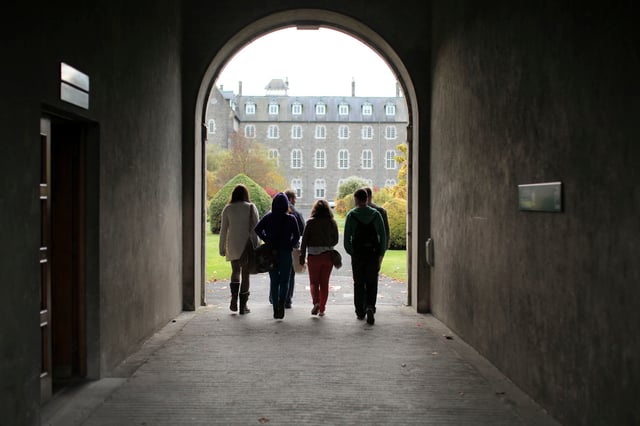 When it comes to classes, you’ll have a lot to choose from. Humanities, social sciences, and natural sciences are particularly strong here. Some standouts are the Irish Cultural Heritage classes and the Conflict Resolution class. Maynooth has the only anthropology and Chinese Studies departments in Ireland. You’ll also be welcome to take Theology classes at St. Patrick’s College if that’s a subject of interest. Stay tuned for a more in-depth blog post about academics at Maynooth, coming soon.

Teaching and research go hand-in-hand here. Maynooth is an up-and-coming research university with 500+ externally funded projects in the works and seven cutting-edge research institutes on campus, so there are opportunities for you to get involved with some groundbreaking work.

One of the easiest ways to meet Irish students is to join clubs and societies. There are around 150 to choose from, including a debating club, a hiking group, and the “Cup of Tea” society. The buddy program is also an excellent way to meet new people. Sign up and you’ll be matched with a Maynooth student who has previously studied abroad and can show you the ropes when you arrive at the university. 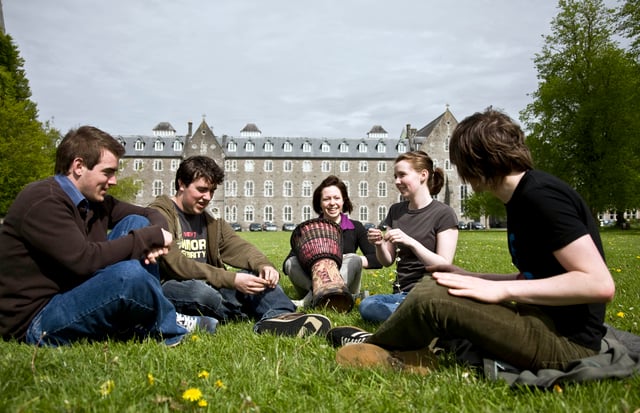 Although you’ll officially be a student at Maynooth University and have all of the benefits and inclusions that the university provides, you’ll also officially still be a CAPA student.

It means you’ll be welcome to participate in CAPA Dublin’s My Global City events calendar where you’ll find a wide range of weekly CAPA-led and self-led activities that will give you opportunities to explore Dublin and attend social events. There will also be several volunteering opportunities to consider. 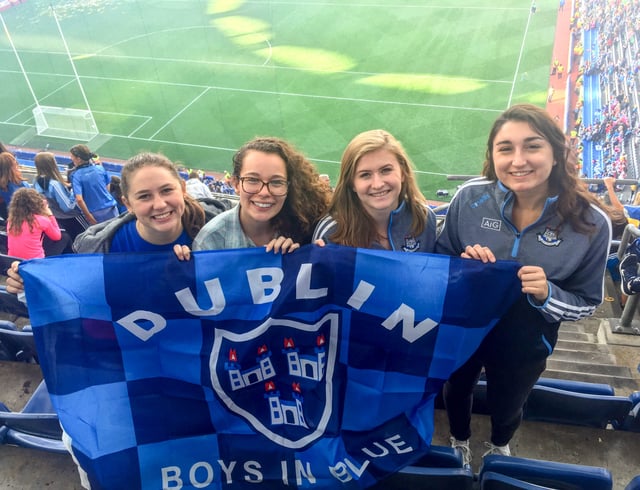 Maynooth University has an unusual history. It’s simultaneously Ireland’s youngest university and one of its oldest educational institutions. Intrigued?

While it was established formally as an autonomous university as recently as 1997, Maynooth traces its origins all the way back to the foundation of the Royal College of St. Patrick in 1795. St. Patrick’s College Maynooth was a seminary and, by 1850, was the largest in the world. Irish priests had always been educated abroad as it would have been illegal, under the Penal Laws, to educate them in their home country.

After the disestablishment of the Church of Ireland, in 1871 a state subsidy was withdrawn and Maynooth College became completely independent. In 1910, it became a Recognized College of the National University of Ireland. It wasn’t until 1966 that Maynooth College expanded beyond clerical studies to become “an open center of university education” and other students were admitted onto National University of Ireland degree courses.

Maynooth University quickly grew after that, becoming more diverse and connected internationally, strengthening its reputation and identity and developing a strong research base. Today, it is an outstanding university renowned for research and scholarship of global repute. 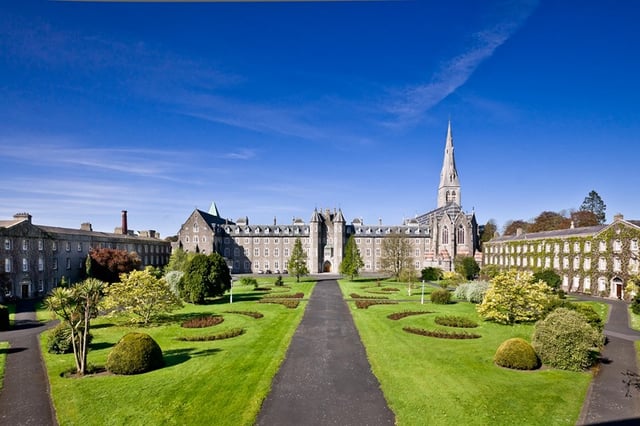 Wondering who may have walked the halls of Maynooth before you? There are some 70,000 alumni around the world that include the likes of John Hume (politician, activist, Nobel laureate and winner of the Sean Mc Bride Peace Award), professional soccer player Jake Carroll, Christopher Fleming MD (a former president of the Royal College of Surgeons), Philosopher and former professor at Notre Dame University Ernan McMullin, and many other academics, physicists, psychologists, poets, broadcasters, theologists, and politicians.