Like any good art history major, the Uffizi was first on my list of things to see in Florence. I hurried to the galleries my second day in the city. When I arrived to the grey arched courtyard that contains the entrance to the museum, I noticed a large banner proclaiming the special exhibit currently running: Islam e Firenze.

My specialization within art history is Islamic art, so naturally I was overjoyed to see an exhibition about my area of interest. I rushed through the whole museum to get to the special exhibit space at the very end which housed the show.

A lacquerware plate from the exhibition sporting the Medici seal.

There, once in the door, I was greeted by a giant stuffed giraffe that was a gift from the Viceroy of Egypt to Grand Duke Leopold II of Tuscany. I continued through rooms of ceramics produced in Turkey but commissioned by the Medicis and decorated with the Medici family crest. I saw Syrian metalwork from the collections of Lorenzo de’ Medici, elaborate carpets which once decorated the homes of wealthy Italian families, and gorgeously illustrated Arabic manuscripts which preserved the knowledge of the Ancient Greeks and, when translated, sparked the Renaissance in Italy. 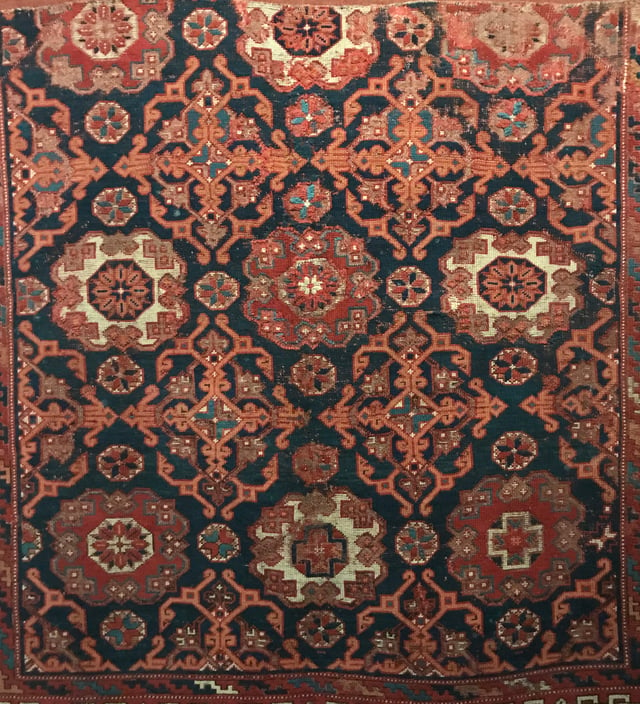 Intricate rugs like this one covered the floors of the homes of Florence’s wealthy families.

The Islam e Firenze exhibition was designed to demonstrate the unbroken exchange between the city of Florence and the so-called Islamic world since the 1400s on. The wealthy of Florence have always admired the beauty of objects from the Islamic world and the skill with which they were made, but they traded more than just objects: ideas and philosophies also spread through these trade networks. The exhibition demonstrates this through the Arabic manuscripts that carried Greek and Arab mathematics and medicine to Renaissance Italy (in one, a Pythagorean triangle is immediately recognizable to anyone who had had the misfortune of taking trigonometry), and through Italian Renaissance paintings like the famous “Adoration of the Magi” by Gentile de Fabriano (1423), where the Virgin and child are adorned with golden halos decorated with Arabic script.

Understanding Florence’s history of exchange with the Islamic world is more important than ever right now. In the most recent election, Italy swung to the populist right, as a result of an anti-immigration campaign fueled in part by rampant Islamophobia. Spikes in the numbers of immigrants to Italy in the past years have caused panic. Many Italians associate the word “Muslim” only with peddlers of cheap plastic toys or terrorists.

Islam e Firenze serves to help amend this historical amnesia, demonstrating that the Islamic world has historically been in contact with Florence since the early Renaissance, and showing that Italians and Muslims have had interactions with each other for many centuries. Furthermore, it helps educate people about the valuable cultural achievements of the Islamic world and builds positive associations with cultures many Italians understand little about. 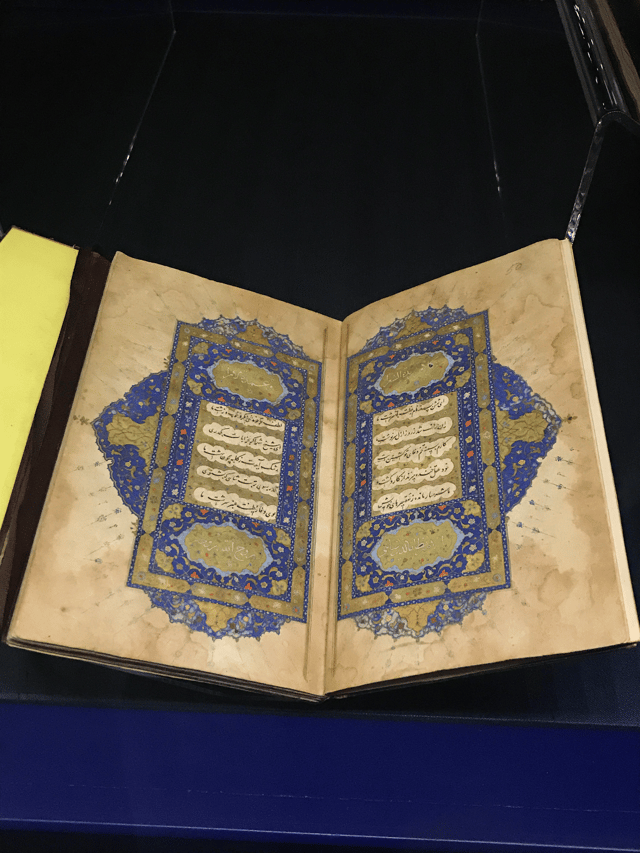 Illuminated manuscripts like this one were both works of art in their own right and carried important scientific, medicinal, mathematical, and artistic information between Florence and the Middle East.

Finally, the programming surrounding the exhibition offered an opportunity for intercultural dialogue. Anna Soffici, director of the Educational Department for Accessibility and Cultural Mediation, helped create programming for the exhibition. She explained that she is not interested in teaching Florentines about Islamic culture, or Muslims about Florentine culture, but instead she seeks to create activities in which new and old citizens can learn something new together. For example, at the Arabic Calligraphy Workshop, new and old citizens could try their hands at the prestigious art of Arabic Calligraphy. Soffici hopes that the common ground of learning together will help spark conversation and genuine connections between new and old citizens, creating intercultural dialogue.

Islam e Firenze was a timely exhibition for a city with a large Muslim population in a country considered to be one of the most Islamophobic in the European Union (Nayeri). Its collection told a much-needed narrative about the achievements of Islamic cultures and the centuries of interaction between the city of Florence and the Islamic world, a history which has been all but forgotten in recent times.

Lauren Ehrmann is a junior studying Art History and Near Eastern Languages and Cultures at Indiana University and spent her Fall 2018 Semester in Florence, Italy. A Wells Scholar and honors student, Lauren hopes to one day work as a museum curator of Islamic art working in the field of cultural heritage preservation in the Middle East.