The Globalization of Chinese New Year

This post appears as China approaches the end of its Spring Festival; CAPA students arrive in Shanghai and, at universities all over the country, local students are making their way back to campus—after the long break between the Fall semester ending mid-January and the Spring semester starting at least a month later. Students are one of the biggest beneficiaries of the Spring Festival period which includes a week of Chinese New Year National Holidays but is much longer than that. Officially the Spring Festival ends with the Lantern Festival 15 days after Lunar New year, which would fall on February 20 this year. It is good timing as most locals are back on the week of February 18 so crowds can visit the special Lantern Festival displays in Chinese cities. CAPA Shanghai students are taken to one.

Crowds visit the Lantern Festival in 2016 in Yu Yuan, Shanghai by Colin Speakman.

By tradition, locals either travel back to their hometowns to celebrate Lunar New Year with family, or, reflecting increasing prosperity, go overseas on holiday adding personal holidays to their National holiday entitlements. General workers are tempted to quit their employment in January to get a long-break and return in March to start a new job. Some businesses, including cafes and small stores, choose to close for a month in big cities because so many customers have gone away. Some never reopen in the end.

All of this is necessary to spread the travel period over the Spring Festival to more than a month. There are just too many people traveling to get plane and train tickets without that flexibility. This is especially true in Shanghai, where 40% of the population are not born there and seek to head to their hometowns. Shanghai can feel eerily deserted during the Spring Festival. For myself, I left temporarily on January 23 for London via Hong Kong. However, I won’t be missing out on Chinese New Year activities as they have increasingly become global events.

Shanghai transport and cafes start to empty as Spring festival kicks in January 2019 by Colin Speakman.

This year has seen a noticeable increase in celebrations of Chinese New Year in global cities around the world. Chinatown in the global city of San Francisco has, for a long time, hosted great celebrations, but this year, thanks to the sister city relationship between Shanghai and San Francisco, Northern California residents can enjoy “2019 Happy Chinese New Year Shanghai Cultural Week” to celebrate both the Lunar New Year and the 40th anniversary of diplomatic relations between China and the US. Shanghai stars headed west present for the first time a host of cultural events, radio and TV productions, movies, and sports events. Over Lunar New Year the audience in San Francisco felt the charm of Shanghai-style culture.

Another first can be found in Edinburgh, capital of Scotland, which hosted their largest ever celebration of the Chinese New Year through a coordinated program of special events for the Year of the Pig over 15 days. Chinese artists performed in Edinburgh and a new Exploring Asia Gallery opened at the National Museum of Scotland and Giant Lanterns were on show at Edinburgh Zoo. 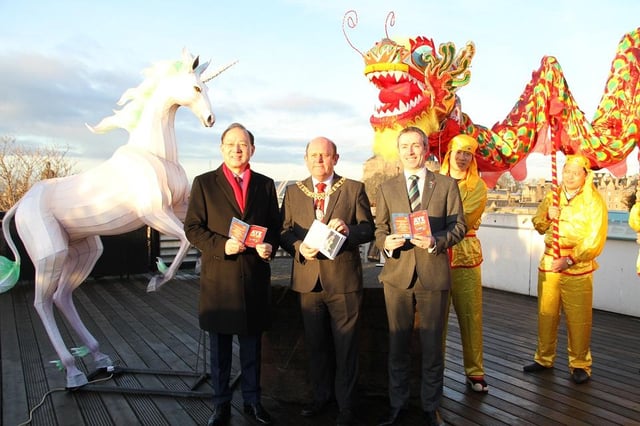 Not all events are purely cultural. Lunar New Year can be a focus for international business relations as networking events. A good example is found in the global city of Paris, where on Chinese New Year Day February 5, at 55 Rue de la Boetie, marketing professionals from China consultancies presented and networked with European counterparts. One of those involved was a leading Chinese Branding Agency, ParkLu, from Shanghai. A CAPA Shanghai student, Sarah Hanegan, had the chance to intern at ParkLu in a past semester and helped to develop their first Fashion Marketing Magazine for this Key Opinion Leader.

One of the traditions of the Spring Festival is the hanging of red posters vertically on either side of the main door of a Chinese home. This year the official residence of British Prime Minister, Theresa May, was displaying such posters on either side of the door to 10 Downing Street in Whitehall, London. Speaking of London, Chinatown there hosted its traditional major parade and events on the Sunday after Chinese New Year on February 10. I was there for it and not for the first time. 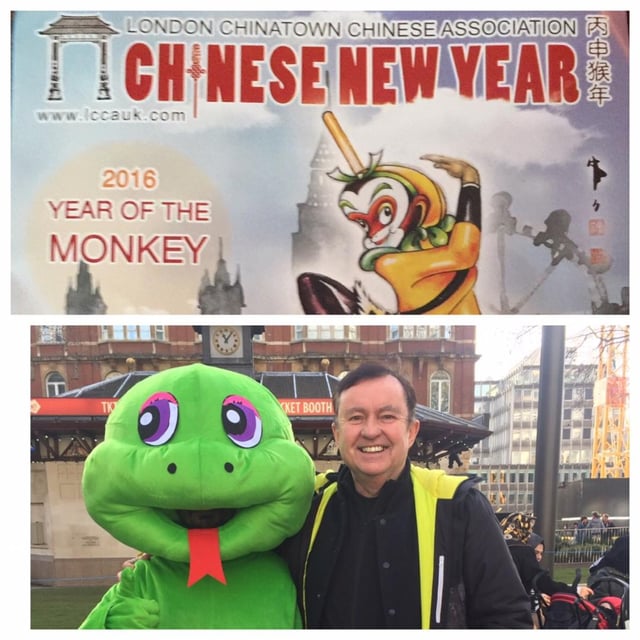 Chinese New Year London Chinatown from the past Year of the Monkey and earlier Year of the Snake
by Colin Speakman. 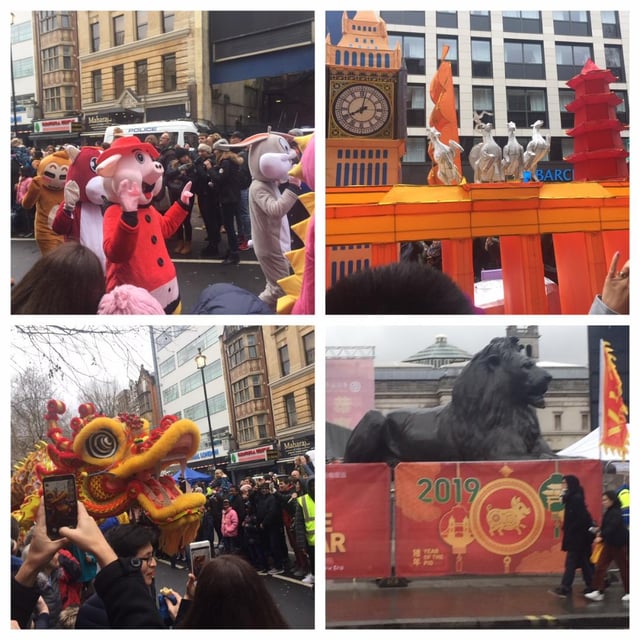 Chinatown London in 2019 to celebrate Year of the Pig by Colin Speakman.

Echoing the special TV show in SFO mentioned above, London local television programs included many Chinese films in the run up to Chinese New Year. In the space of a few days I was able to watch The Flowers of War (a well-scripted movie about the terrible Nanjing Massacre of 1937), Shanghai Knights (a Jackie Chan comedy movie about Chinese bad guys fleeing to London), and an amazing presentation of the whole of The Great Wall of China with footage shot by drones from a special vantage point. Incidentally, fans of Jackie Chan might like to know that he has a Jackie Chan Film Studio in Shanghai, quite near CAPA’s campus at East China Normal University. 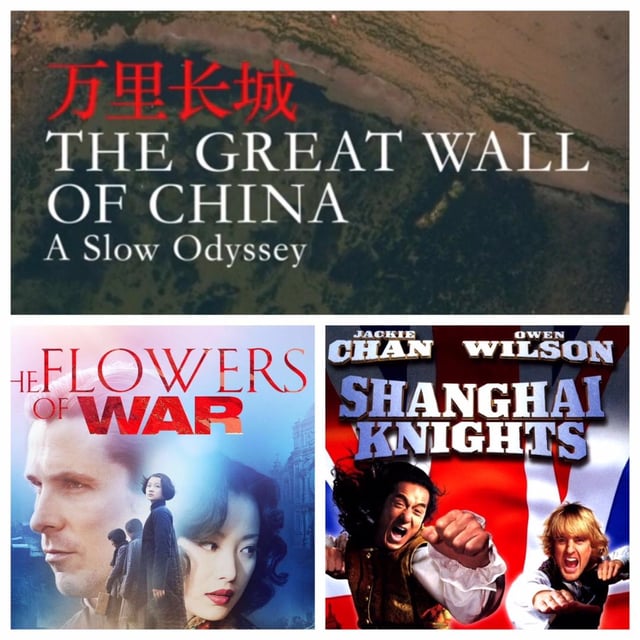 If you're in another Asian global city for Lunar New Year, you will find that locals usually get a long holiday such as in Ho Chi Minh City and Hanoi, both in Vietnam, where I celebrated Chinese New Year in 2017. It was not the Year of the Dragon, but, as I am a Dragon, I thought I better get a photo near some! 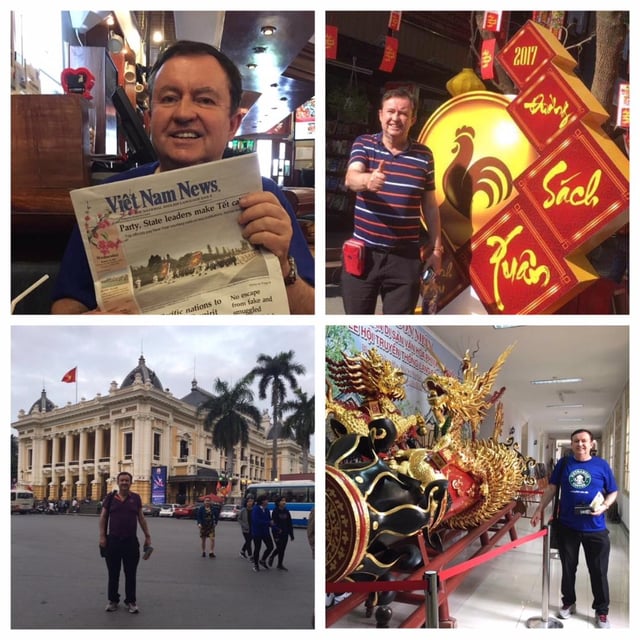 Chinese New Year has become a global form of engagement between China and the world, which seems only likely to grow. It is a wonderful opportunity for people-to-people interaction especially at times when tensions exist in some relations with China. It is always useful for countries to get to know better the cultures of other countries. Of course, study abroad can help in this area too!