The assertion that “London is not England” is, of course, literally true. Like all cities, borders distinguish, to some degree or another, urban, suburban, and rural space. However, the assertion contains a coded message beyond geography; there is an “authentic” England from which London deviates. Negative implications suggest that the city distorts and corrupts traditions designated as representative of “real” England.

An alternative perspective relates London to a cluster of other cities that transcend conventional ideas of national identity. These cities are, in one sense or another, “global”; Sydney, New York, Shanghai, Barcelona, Florence, Dublin, and so on represent characteristics that transcend the local. They form a contested terrain where myths coexist with realities, where civilizations meet, and where diversity brings creative and intellectual energy, and conflict. They are within the geographic nation but are not constrained by those borders.

London is a global city that integrates and transcends local culture.

London’s difference from national norms was demonstrated politically by the Brexit vote of 2016. Almost 60% of the population voted to remain in the EU. In contrast to much of the nation, the city has powerful transnational associations. The population reflects the impacts of colonial history and globalization in measurable ways. Something like 300 languages are spoken in the city.[1]

About 37% of the population was born outside of the UK. About 40% are categorized as non-white. In other English regions the non-white population represents between 4.5% and 17%.[2]

In 2016, a Muslim, Sadiq Khan, was elected Mayor of London with almost 60% of the final vote. He was born in London to a working-class Pakistani family.

There is something exceptional about London; its sprawling complexity encompasses the paradoxes of the past and the dynamics of the present-future. The fallacious notion that London is somehow a “traditional” location for education abroad is sustained by stereotypical iconography that originates in nostalgia for a lost, “authentic” England. Such images ignore the reality of one of the most transformed urban spaces in the world. While some may think that change is equated with loss, change is also a catalyst for growth.

“Authentic” England, if it ever existed, belongs to mythic narratives of national history. Noel Coward's Cavalcade (1931)reflects a yearning for a return to a heroic past:

Let's couple the Future of England with the past of England. The glories and victories and triumphs that are over, and the sorrows that are over, too.. let's drink to the hope that one day this country of ours, which we love so much, will find dignity and greatness and peace again.

John Osborne's Look Back in Anger (1956) locates this nostalgia in an idealized version of colonial experience:

It was March 1914, when I left England, and apart from leaves every ten years or so, I didn't see much of my own country until we all came back in '47. Oh, I know things had changed, of course. People told you all the time the way it was going—going to the dogs, as the Blimps are supposed to say. But it seemed very unreal to me, out there. The England I remembered was the one I left in 1914, and I was happy to go on remembering it that way.

In Berlin, the poet Rupert Brooke dreamed of such an England in “The Old Vicarage, Grantchester” (1912):

Oh, is the water sweet and cool,
Gentle and brown, above the pool?
And laughs the immortal river still
Under the mill, under the mill?
Say, is there Beauty yet to find?
And Certainty ? and Quiet kind?
Deep meadows yet, for to forget
The lies, and truths, and pain? . . . oh! yet
Stands the Church clock at ten to three?
And is there honey still for tea?

Change is equated with loss. The “real” England exists in the past and is reconstructed through memory.

Tourist London is also frequently represented as a cluster of traditional images including, among other things, The Tower of London and the Beefeaters, The Changing of the Guards, Buckingham Palace, London buses, policemen with odd hats etc... The selling of England draws upon a set of icons that are nostalgic, stereotypical, and unrepresentative of the shifting nature of contemporary reality.

The actor Tim Roth (“Shoptalk”, December 21st, 1999) identifies cinematic representations as another source out of which ideas of England derive:

Americans have bought into the romantic Jeremy Irons—Kenneth Branagh England. It’s phoney. It’s fake...Notting Hill, all those mannerisms and flawless turns of phrase, people don’t really talk like that in England ...British films are manufacturing fairy tales and Americans are going for it like they are buying picture postcards.

These versions of England are predominantly white, largely rural, or suburban, and most often middle or upper class. Industrial and post-industrial England, the “satanic mills”of William Blake and the dank miasmas of Dickens are missing. Racial prejudice, poverty, and parochialism are not part of the narrative, nor are the progressive dynamics that have created tolerance and creative interactions between diverse peoples. It is not the place I know but is built upon myth rather than observable realities.

Why study in London? 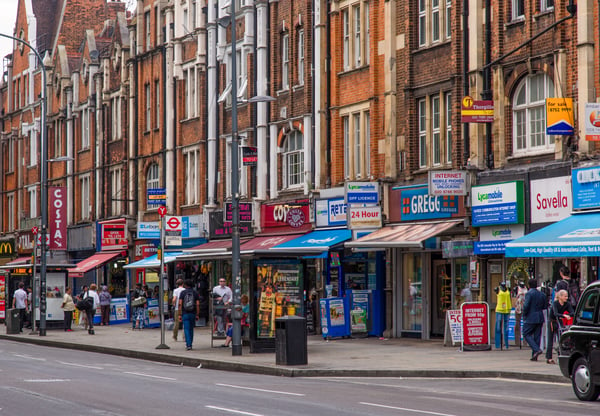 The city is a place of diversity and social dynamics that define the worlds we inhabit.

London is not represented in those constructed versions of England. It does not correspond to the places recreated in acts of nostalgia for lost worlds, invented in marketing departments selling a dream, or in behaviors represented in popular culture. Instead it is probably the most reformed and fluid city in Europe. That is not to deny that there may be elements of truth in these mythic inventions. No place is built only in concrete; it is also constructed in the imagination. The interaction between what we see and what we dream constitutes the universe we perceive. The intersection of stereotype, expectation, and analysis creates significant learning opportunities.

In education abroad, studies of urban environments have an obvious relevance. For most of us the rhythms of life are no longer defined by nature. We do not wake and sleep in alignment with the rising and falling of the sun. Time is marked by other more mechanical and noisy cadences. Life in cities is governed by other imperatives.

Yet cities occupy less than 3% of the world’s land mass. The growth of cities will shape the development of our world. Our experiences are increasingly impacted by those realities. The city is a place of diversity and social dynamics that define the worlds we inhabit. An engagement with, and within, those spaces is arguably crucial to the educational agenda.

In this respect, the city also places the notion of situational learning at the heart of education abroad. Students are engaged in studying various courses and also, essentially, the context in which those courses exist. In the city, the interaction of place and discipline creates potential for significant enrichment and enhancement of learning. The traditional boundaries of academic disciplines are necessarily eroded. Approaches to studying the city may be primarily geographic, economic, political, ethnographic, sociological, literary, historic, mythic, psychological, and so on, but they are never solely one or the other. Cities are, then, uniquely challenging sites for studying and teaching.

As a center for analysis, exploration and discovery, research, participation and observation, the city offers a rich field of academic potential precisely because it is multi-layered, multi-dimensional, complex, and challenging. Studying in urban environments raises issues that are profoundly relevant to contemporary experience: the interface between tradition and change; power and inequality; heritage and history; urban environments and sustainability; security, crime and liberty; creative and cultural industries and renewal.

The definition of a global city is contested. However, these cities transcend conventional notions of national identity and are, in some sense or another, reflective of the processes of globalization. Definitions of a “global city” may include factors such as economic power, artistic influence, regional importance, historical significance, geopolitical authority. A key characteristic, however, is that we have imagined these cities even if we have never visited them; they are landscapes of the mind as well as of bricks and mortar. They have a significance beyond the boundaries of the nation-state.

London is a preeminent example of just such an urban environment: a landscape of conjunction and collision where myths coexist with realities, where civilizations meet, and where diversity in all its manifestations brings creative and intellectual energy, and conflict. In the novel Villette (1853), Charlotte Brontë identifies the seductive attraction of the city: “I like the spirit of this great London which I feel around me. Who but a coward would pass his whole life in hamlets; and for ever abandon his faculties to the eating rust of obscurity?” The village is small, parochial, and narrow. The city, in contrast, is inclusive, wide enough to contain polarities and paradoxes. To travel through these cities is to encounter juxtaposition and asymmetry, movement and flow. Geography offers a metaphor for intellectual space. 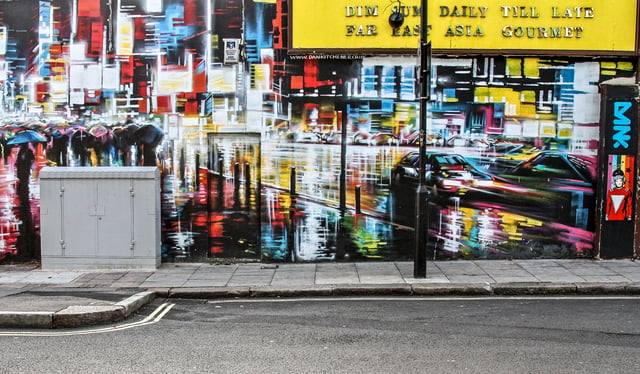 All are strangers and, thus, all belong here in London.

I am a Londoner. We are, for the most part, disconnected from notions of “authentic” England. Rather like New Yorkers, our focus has not been towards the interior of the country but rather toward other worlds. Our connections and identities are shaped by our histories, particularly that of migration and social dynamics. The England of tradition and continuity has always been alien to Londoners because the world we know has been subject to permanent alteration. The many ethnic groups that have settled here have changed the city fundamentally. In the east of London, close to where I was born one building demonstrates that reality. In Brick Lane, Huguenot refugees escaping from Catholic persecution in Europe built a fine church. When I was a child, as a result of Jewish immigration, the church had become a synagogue. The same building is now the Central Mosque serving the next wave of immigrants from Bangladesh. Diversity is the norm.

The novelist Hanif Kureshi in Sammy and Rosie get Laid (1987) precisely identified Londoners as having identities shaped by narratives other than those that are constructed around Englishness: “We love our city and belong to it. Neither of us are English, we’re Londoners, you see.” London is, of course, in England, but there is also a sense of separation, of distance. According to the poet Benjamin Zephaniah, this has created a distinctive people: “The London Breed” (2001):

I love dis great polluted place...
Two hundred languages give voice
To fifteen thousand changing years
And all religions can rejoice
With exiled souls and pioneers...
We just keep melting into one
Just like the tribes before us did,
I love dis concrete jungle still
With all its sirens and its speed
The people here united will
Create a kind of London breed.

Zephaniah’s London is not necessarily comfortable and his vision may be over optimistic but he captures the profound distinctiveness of the city and its paradoxical identity. All are strangers and, thus, all belong.

[1] These statistics can be found in research conducted by Queen Mary University of London’s Multilingual Capital research group: http://www.multilingualcapital.com. (2018)
[2] The 2011 census offers evidence of the unique make up of London: https://data.london.gov.uk/census/
[3] See United Nations World Urbanization Prospects The 2014 Revision: https://esa.un.org/unpd/wup/publications/files/wup2014-highlights.pdf