The Southernmost Point: a Week in Patagonia

In this week's post, Elizabeth shows us some incredible views of glaciers and wildlife in Patagonia.

The week before Easter was Spring Break here in Argentina, and I had an entire week free from classes. I headed to Patagonia, about as far South as possible, for lots of hiking and indescribable views, which I’ll spend this whole post trying to describe anyway. 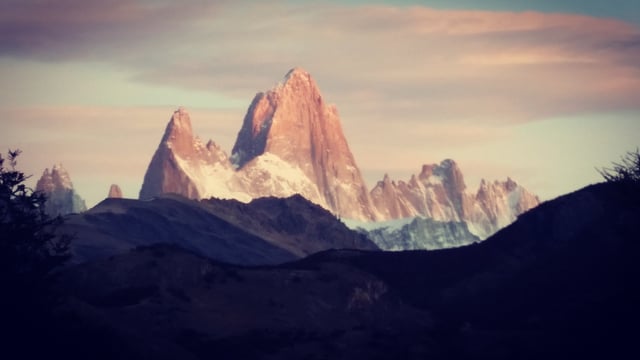 I went first to a town called El Calafate, at the Southernmost inhabited point in the world! The weather was cool and mild, with lots of breezes blowing in from the lake and mountains that form a picturesque ring around the town. I was so stunned by the variation in the mountain landscape-- jagged peaks capped with ice and snow, rounded boulders, striated cliffs.  I found myself wanting to look everywhere at once, there were just so many views to take in!

The main attraction of El Calafate is the Perrito Moreno Glaciar, known for being one of the few glaciers currently advancing, rather than retreating. The pressure of the ice causes frequent ruptures in the glacier, and as I walked along the water’s edge I could hear deep, loud rumbling, just like thunder, before an explosion of ice crashing into the water.  The lake around the glacier was the brightest, clearest blue I’ve ever seen, thanks to the sediment created by the glacier grinding away at the rocks underneath. It looks like glass. The glacier itself is unfathomably big. It sits between two mountains, and I felt completely unable to understand just how high and wide the ice was, and how far back beyond the mountains and horizon it stretched. 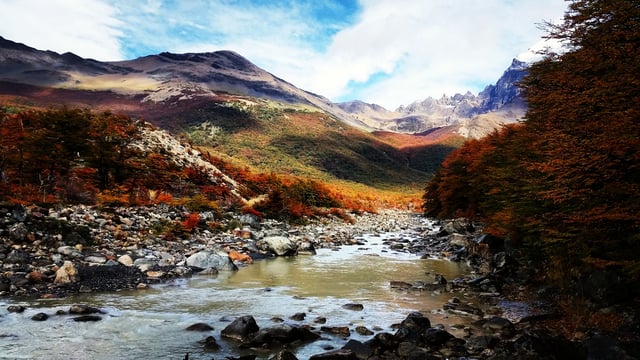 Photo: a view from a walk in El Chalten

I spent the next day biking around the town of El Calafate, enjoying more views of the lake by the beach, and the mountain. I also got a chance to see some of the wildlife unique to Patagonia. There were huge flocks of bright pink flamingos wading and flying over the water. I hadn’t known they could fly so high! I also saw hundreds of ducks, and swans with white bodies, black necks, and bright red bills. I biked past horses, and noticed lots of “evidence” of them all along the streets and trails. Later I saw a group riding horses right on the road!

After two days in El Calafate, I traveled a little further north to El Chalten, a very new, very small town surrounded by mountains. The hostel owner told me the town was only 30 years old, but it’s clearly growing fast. There were new cabins and buildings being constructed all over the place, and along the trails I met tourists from France, China, Australia, Thailand, Germany, Brazil-- all over the world. I wonder how different El Chalten will look in 10 or 20 years. 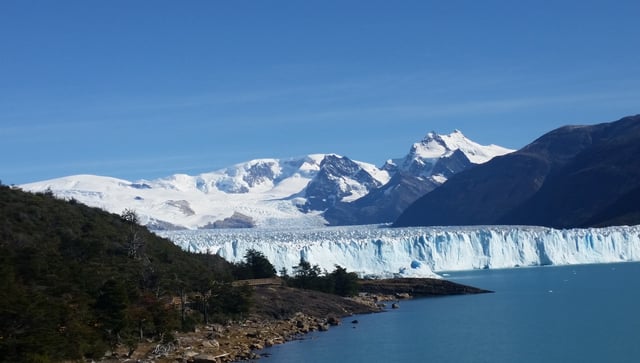 The views there were incredible. The leaves had begun to change for fall, and so many of the mountains were covered with a rainbow of trees, or else with snow and ice, or scarred by avalanches. I saw more glaciers, and more bright blue waters, and forests of twisted, bleached gray, leafless trees. One of my favorite parts of the daily 20 km treks I took was drinking water from the clear, glacial streams.