The Sports Culture in Barcelona

It’s only a 13-minute drive or 17-minute cycle from the CAPA Barcelona center to Camp Nou, home to FC Barcelona. If that doesn’t ring a bell, study up before you go because you’ll probably be hearing a lot about the city’s beloved soccer team while you’re abroad—and rightly so as they are one of the best in the world!

Soccer (Fútbol) is definitely the most popular sport in Barcelona, but it’s not the only one that has an enthusiastic following among city residents. Sports can offer great insight into a culture, so whether you’re an avid fan at home or just interested in observing the way the fans celebrate their teams, it is well worth attending a match or two while you’re in Spain. 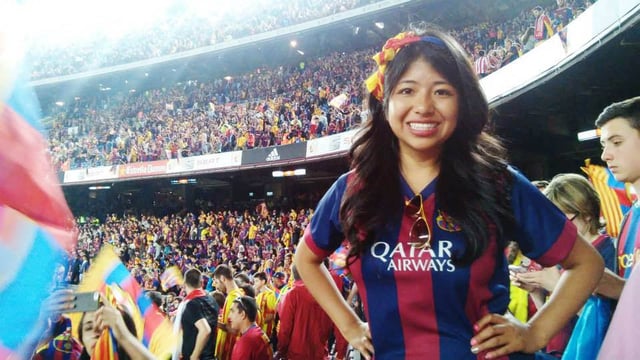 If you’ve followed the FIFA World Cup 2018 in Russia, you may know that FC Barcelona was strongly represented with 14 players having traveled to play for 9 different participating teams. At home, they play in the biggest stadium in Europe with 100,000 seats, so entertaining large crowds is nothing new.

The club formed in 1899 and only a year later another Barcelona team appeared: RCD Espanyol. They’re FC Barcelona’s biggest local rival and the teams come together to compete in the popular Barcelona Derby. Their fiercest rival, though, is undoubtedly Real Madrid, which reflects a wider rivalry between the two cities generally, and politically—notably most recently during the campaign for Catalan independence.

When there’s an FC Barcelona victory, you’ll know it from the crowds who gather to celebrate by Font de Canaletes on the famous La Rambla boulevard.

Take a look at their impressive list of records and stats or check out their website to learn more.

The FC Barcelona Bàsquet has been around since 1926. They’re one of the top basketball teams in Spain. As with soccer, Madrid is the team’s biggest rival. If you follow the sport at home, you may be familiar with the name Pau Gasol, one of Bàsquet’s most famous players who has gone on to become a 6-time NBA All-Star. UNES FC Barcelona, the wheelchair basketball team, is also popular here.

While the city has an ice hockey team, roller hockey is the more popular sport of the two. Enter the FC Barcelona Hoquei team (yes, another one to bear the FC Barcelona team brand, as many do). They’re the most successful roller hockey club here in Spain and throughout the rest of Europe, having claimed the championship title of the European Cup 21 times as well as the Spanish OK Liga 26 times.

Though not such a widely played sport in the United States, handball is popular in Spain. The FC Barcelona Handbol team, which was formed in the 1940s, tops many of the national and European championship competitions.

Volleyball is also a well-loved sport in Barcelona. The Barcelona women’s volleyball team, Club Voleibol Barcelona, and the men’s FC Barcelona Voleibol club both play at the top level, in the Spanish Superliga. Recreationally, with opportunities abounding on the beautiful strips of sand that line the coast of the city, beach volleyball is also very popular.

If you need your American football fix while you’re abroad, not to worry! The Barcelona Bufals have you covered. They’ve only been around for about 30 years, but are regular participants in the Spanish National League of American Football’s second tier division.

Barcelona was host to the successful Olympic Games of 1992, which gave the city a boost in terms of athletic accomplishments (some truly impressive performances were given by Spanish athletes). It was also a catalyst for widespread urban renewal, so it left in its wake some solid new infrastructure with many first class sports facilities that allow the city to continue hosting international competitions and provide excellent training grounds for its professional athletes to this day. Tours of the Olympic Stadium are, of course, available!

Find out how you can study abroad with CAPA in Barcelona and experience the culture in this global city!