If you want to study the life and works of William Shakespeare, then London is the place to be! Hannah writes about fulfilling her literature elective with a Shakespeare class and the chance to see his plays brought to life at the Globe and Bridge Theatre. She also explains the significance of learning about his life—from his artistry to his universality—in this very city where he lived.

What do Disney’s The Lion King, Herman Melville’s Moby Dick, and Taylor Swift’s “Love Story” have in common? They were all inspired by the plays of William Shakespeare! This summer session, I am enrolled in Shakespeare and London, so I have been studying this famous playwright’s life, times, and work. London is one of the best places in the world to study Shakespeare. It’s where he lived, wrote, and performed. You can walk in his footsteps along the banks of the Thames, catch a show at the Globe, and clasp his alabaster hand at his memorial in Southwark Cathedral. Taking Shakespeare and London was definitely the right choice for me; it’s a fun, unique way to fulfill a literature elective. Not only do you get to practice your acting skills and develop your director’s eye as you read through a broad selection of The Bard’s works, but you also get tickets to Shakespeare performances around the city! 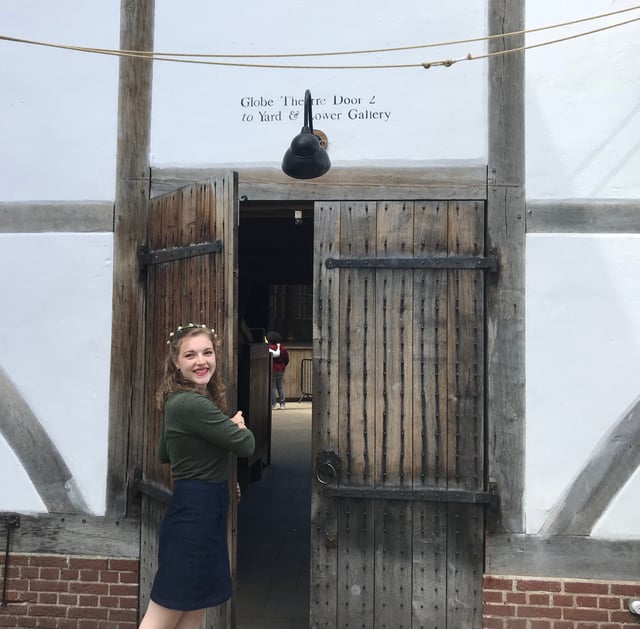 Come step inside Shakespeare’s Globe, and let me tell you about my summer Shakespeare studies! (How’s that for alliteration?)

For class, I’ve been to see The Merry Wives of Windsor and Henry V at Shakespeare’s Globe and A Midsummer Night’s Dream at Bridge Theatre, all of which I found both progressive and stylistically diverse from one another. For example, the Globe’s production of The Merry Wives of Windsor is set in the 1930s jazz era, complete with swing dancing, period costumes, and swanky big band-style musical numbers. The changes made to this play give the female characters more agency and freedom of expression. Additionally, the Globe has implemented gender-blind casting, so the role of Henry V in the eponymous show is played by Sarah Amankwah, who delivers a riveting performance as she rallies English soldiers and woos Katherine of France.

Here I am after a production of Henry V. The Shakespeare’s Globe doesn’t have a roof, so be sure to bring a jacket with a hood in case it rains like the night I was there!

The Bridge Theatre also experiments with the original text, switching the roles of Titania and Oberon, thus creating a hilarious, party-like show that empowers women and celebrates LGBTQ+ Pride Month. As I watched from the pit, I was astounded by the spectacle. Actors gracefully swung through the air, doing aerial acrobatics, and led us in dancing around the stage to Beyoncé. During the show, I also held hands with faeries and grazed (inflatable) moons with my fingertips, so I’d say it’s pretty hard to top that kind of experience. Both Shakespeare’s Globe and Bridge Theatre have managed to transform and innovate these classic plays, delivering them in such a way that they retain their original language and effect while also seeming progressive and applicable to today’s society. 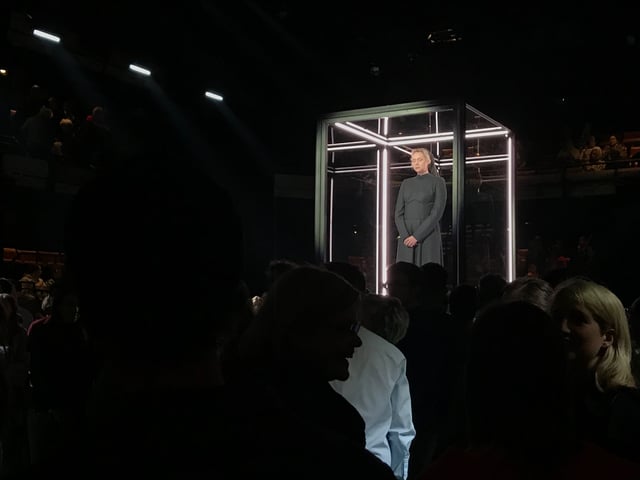 Bridge Theatre often has a famous name or two on the playbill! This production featured Game of Thrones’s Gwendoline Christie as Titania and Hippolyta! At the beginning of the play, she is trapped in a glass cage, watching as audience members file in. 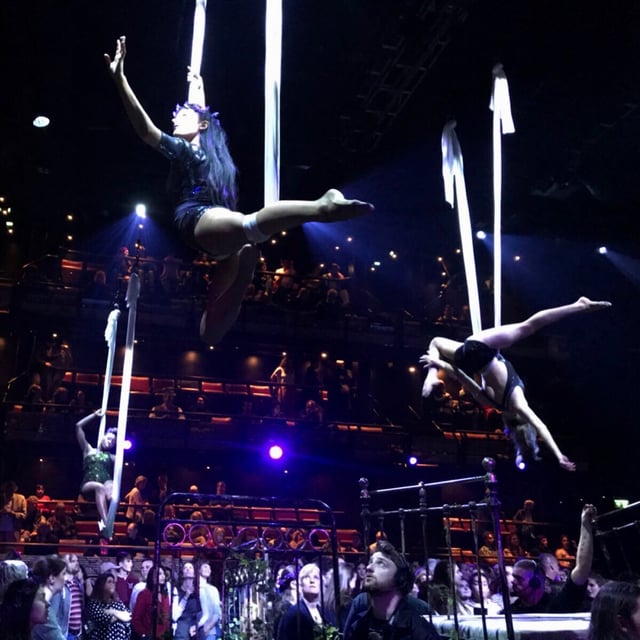 After an intriguing class discussion on staging, I decided to learn more about the Elizabethan era by touring Shakespeare’s Globe. Reconstructed in 1997, Shakespeare’s Globe strives for authenticity. In rebuilding, they used techniques and materials that would have been available at the time; therefore, the roof is thatched and the walls are made of a mixture of lime plaster and goat hair. The Globe also tries to remain historically accurate in their staging. The props are minimal, sound effects are manual, and the actors project their voices rather than using microphones. While the Elizabethans didn’t have electricity, the Globe does have spotlights which it uses for evening and night shows so that the actors and the audience can see the story unfolding on stage.

The Globe sits right along the Thames.

In the Elizabethan era, tickets to the Globe’s productions would have been 1 penny to stand in the yard. Today, it only costs £5 to be a groundling. Personally, I think that standing is the best way to experience a show at the Globe or other similar theaters like Bridge Theatre, because you feel like you’re part of the show. The actors at the Globe have been known to run through the yard, playfully swipe hats, distribute flowers, and address members of the audience during a production. 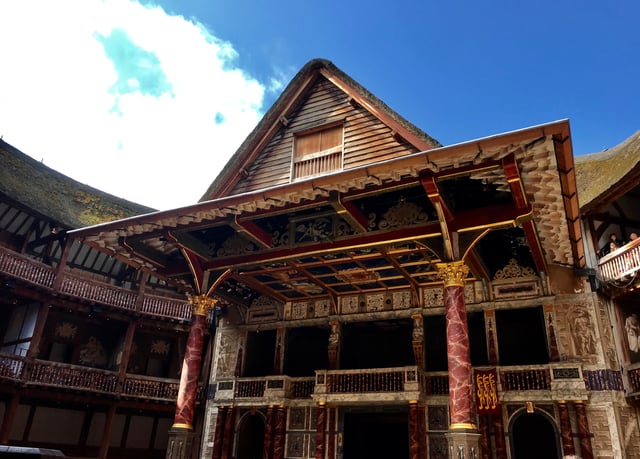 Shakespeare’s Globe is designed to represent what the original might have looked like. The signs of the zodiac prance around “heaven,” the ceiling of the stage, and there is a trapdoor to “hell” underneath.

Between reading The Merchant of Venice and researching Shakespeare’s representation of the supernatural, I had the chance to sit down with my course instructor, Robert Ball, to talk about the lasting impact of Shakespeare. In addition to teaching Shakespeare in London, Ball is also the founder and artistic director at the Fred, a theatre in Stratford-upon-Avon. Given his background in theatre, Ball approaches the course from an academic, literary, and practitioner’s standpoint.

According to Ball, “Although we are studying works of literature, [Shakespeare’s plays] were written to be performed. We understand best when they are in performance.” He also maintains that the literature and the performance are “inextricably linked,” because Shakespeare wrote his plays to be performed. Therefore, while Ball thinks it is rewarding to read through the plays from a literary perspective, thinking about imagery and language, he believes they “reach their full maximum capacity when used on stage.” 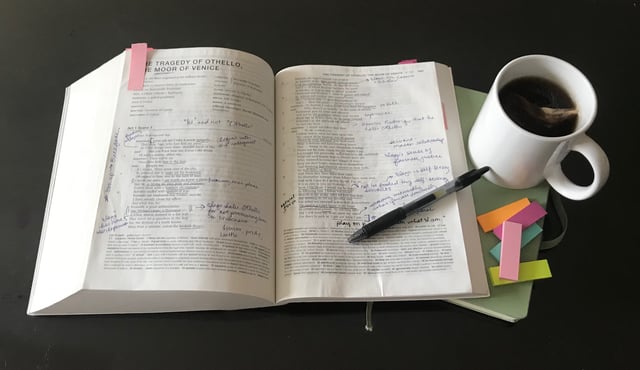 This is my annotated copy of William Shakespeare: Complete Works. I have taken notes in preparation to lead discussion on Othello.

In the case of The Merry Wives of Windsor and A Midsummer Night’s Dream, two plays we read in class before seeing live, I’d say that this is true. Seeing the actors move about the stage brought the plays to life. The magic and humor behind the words bubbled to the surface, and I found that I came to understand Shakespeare’s meaning even better through the live interpretations.

While we were talking, my professor also discussed what seems to be the theme of this course: Shakespeare’s timelessness. As Ball put it, “The stories [of Shakespeare] are so universal that you can take them into a different time and put them into a different context that makes it just as relevant for us today [as it was at the time they were performed]... There is a universality to Shakespeare. Today is so different than 400 years ago, but underneath, humans are still the same.”

Bridge Theatre had a lovely wall of flowers like the ones used by Puck and Titania in the play to cast spells on Oberon and the four lovers.

Shakespeare often gets a bad rap for being difficult and inscrutable; however, while his plays are challenging, I’ve found that the reading process becomes easier and more enjoyable the more you devote time and energy to it. The plays are still very accessible to modern audiences; pop culture and companies like Bridge Theatre continually demonstrate this for us. In his work, Shakespeare dealt with psychological and political themes such as love, revenge, and power in ways that are still inspirational and culturally relevant today. So, based on my experience in the course and the city of London, I can assure you that Shakespeare truly is for everyone. 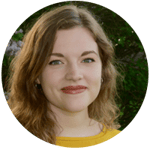