In this week's post, Elizabeth takes a trip to Tigre, a town just outisde of Buenos Aires, for a view of it's island way of life.

This past weekend I took a train to Tigre, a touristy little town just outside Buenos Aires. It's a unique and charming place, and the scenery was a nice contrast to the busy streets and rows upon rows of 10-story buildings I've gotten used to  seeing everyday here in Buenos Aires. Tigre is a river town, and it's got barges and speedboats and canoes and tour boats just about everywhere you look. It's named for the jaguars that once roamed the area, and were hunted by European settlers who built the town and the docks in the early 19th century. Fortunately I didn't see any jaguars, only ducks and adorable dogs. I did see some other signs of wildlife and livestock, though, in the shops and markets near the docks. Fur pelts, shawls, coats, and bags were hung for sale along the walls--sheep, rabbit, cowhide, and lots of otter. After poking around for a while (and buying a straw hat-- Argentine shops almost always have great hats.) it was time for a riverboat ride along some of Tigre's many rivers and canals. 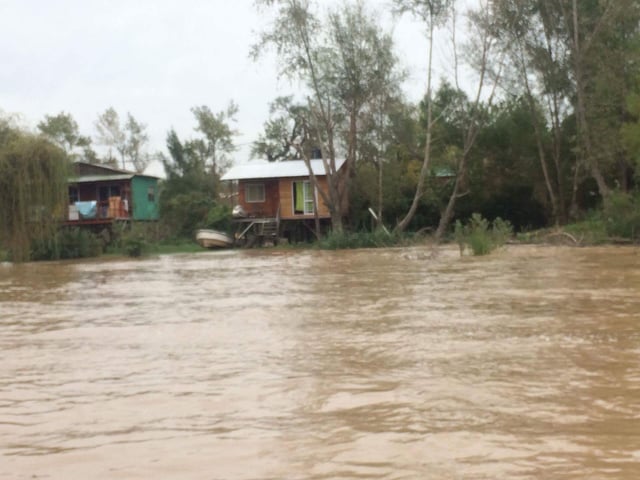 Photo: a view from the docks in Tigre

The waterways in Tigre thread together to form a small chain of islands.  They're covered with rich green forests, dense vegetation, towering palm trees and evergreens that slant down the river bank and reach arched branches towards the water. Although the islands are only accessible by boat, and have no running water or stores, they are inhabited all year round!  There's even a primary school, secondary school, and a community center. 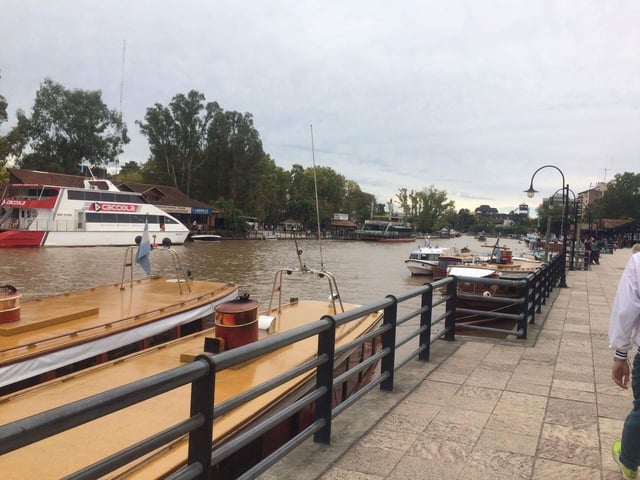 Photo: Tigre is also, unsurprisingly, home to a rowing team. I saw lots of rowboats speeding down the rivers, and a few pairs racing.

The riverboat took me past the island neighborhood, where most houses were built just one the edge of the water, each with its own, small, private dock. Similar to the houses I saw in Punta del Este, these riverside houses each had a large sign displaying a creative name, rather than a hours number. Names like Frida, Tolkeyen, and Parajo del Fuego.  The houses and signs and docks were stylishly decorated, some ornate, some simple, some huge mansions, some small cottages. Some were bright blues and pinks and yellows, but most were wood, or earth toned, and blended a little with the surrounding forests. The housing prices also varied enormously-- the guide told us that they ranged from anywhere between $100,000 to close to 1 million (in US dollars). I got a glimpse of life along the river as well.  I saw people gathered on their patios eating lunch, and fishing on the docks, and playing with dogs (it seemed like every house had a dog).  Everywhere, there were water taxis and speedboats and people canoeing.  There were even boats that function as mini convenience shops-- they stop along the river in case people need to pick something up and don't have time to sail to the main land.

Photo: Many of the island houses leaned on tall stilts

After the tour, I walked around some of the open marketplaces surrounding a very fun-looking amusement park.  I couldn't resist some of the street food, and ended up stuffed full of delicious dulce de leche filled churros and warm, fragrant bread.

That's all for this week, thanks!