Words by Raven Sanders, a CAPA Buenos Aires student and psychology major from The University of Alabama.

Sometime back in late February, I started hearing whispers that President Obama of the United States of America was going to visit Argentina to congratulate President Macri on his work and to have serious conversation on the way the two countries can collaborate going forward. As interesting as I found the information back in February, I didn’t think much of it. After all, interacting with other heads of state is part of his job, and I was a little overwhelmed at the time preparing for my own study abroad trip to Buenos Aires. Fast forward several weeks, and as I’m looking into finding reputable newspapers and TV channels so I can monitor my President’s address to the nation I’m currently living in, I receive the news that I’m invited to attend his Q&A Dialogue. I never could have imagined such an amazing opportunity coming my way, but thanks to lucky circumstances and the hard work of the directors in charge of CAPA and International Relations at Universidad Austral, I found myself in the room where it happened. 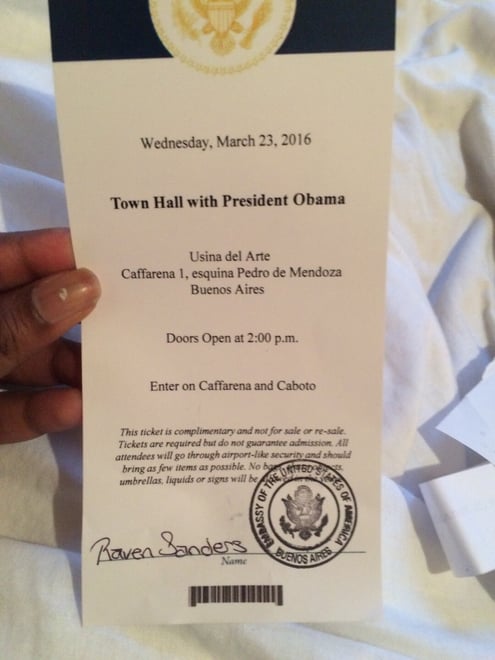 I attended with Director Marcelo Meregalli Ferrer and Professor Stéphanie De Moerloose from the Buenos Aires Austral campus, and we met up with Austral staff from Pilar at the event. I knew traffic was bound to be high but even so I was surprised our cab had to let us out four blocks away from the event to avoid getting gridlocked. As we walked the rest of the way, Professor de Moerloose pointed out the conventillos and explained their history. We ended up in a line almost two city blocks long that wrapped around street corners. Buenos Aires Federal Police and United States agents walked the streets alongside event volunteers who occasionally asked to see our invitations. I saw members of Argentina’s top tactical forces; when I asked who they were I was told they were Argentina’s equivalent to a SWAT team. As we got closer to the venue I saw more and more Secret Service agents until finally we were in the courtyard of the Usina del Arte.

We were sorted into different lines based on the color on our invitations and ushered through airport-style metal detectors. Once inside we shuffled back and forth between the seating areas available to us, weighing the importance of being closer to where President Obama would be versus being in front of the stage so we could face him.

Eventually the Friends of Fulbright students, some of the last attendees to enter, filed in to sit on the stage behind the podium. A young woman name Celeste Medina spoke about her time in the Young Leadership Initiative and then introduced President Obama to the stage. The applause was thunderous, and continued on and on. The President gave a short speech on how impressed he was with the things President Macri had done so far to support the people of Argentina and how he hoped to begin a new relationship of collaboration and mutual respect between the United States and Argentina. At one point he attempted a short sentence in Spanish- “Somos un equipo.” It wasn’t pronounced quite right, but everyone understood what he meant and gave a small laugh as he joked about needing to practice the language to improve. 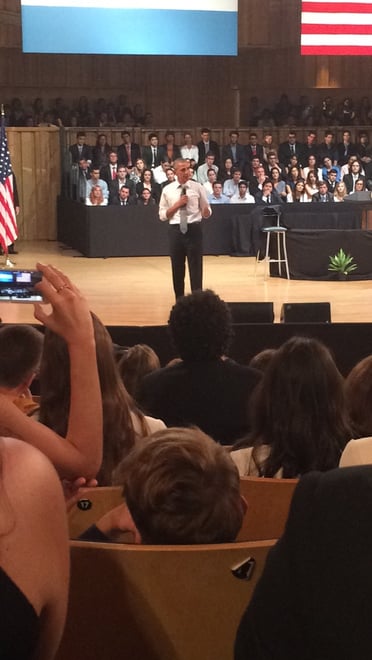 The speech was brief and concise; President Obama said he was keeping it that way on purpose to have more time to answer questions. He was full of charisma and grace, and at the same time seemed very approachable. He took off his suit jacket and walked the stage, pointing to people for questions and listening to each one intently before answering.

I tried to remember to take pictures and keep notes on the questions asked and his answers, but simply listening to him expound on different ideas is such an experience that I often forgot to do anything else, and the pictures I did get weren’t always that great. I am now more impressed with journalists than I have ever been before, and before I was pretty impressed. The President answered questions for almost an hour and covered a range of topics, from humanity’s ability to ever form one cohesive global society and the issues with Israel and Palestine to how to support social businesses and how to encourage international collaboration in medicine and science. 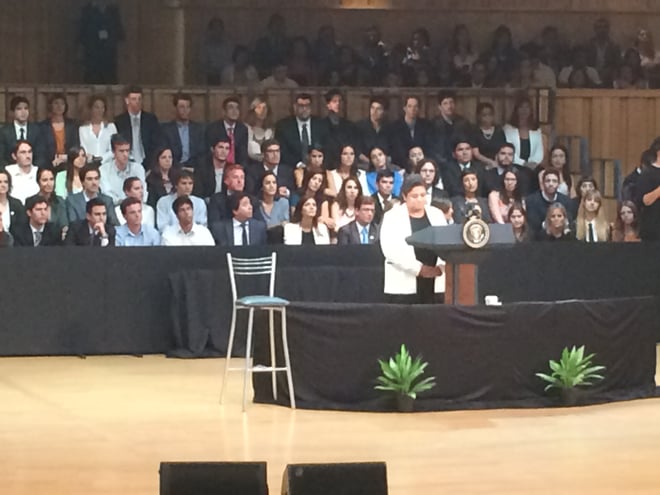 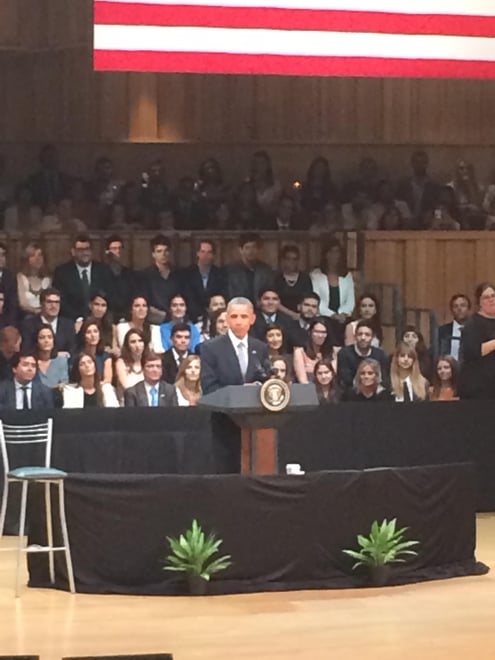 Time really flew by, and before we knew it the event was over. As we walked out Professor de Moerloose pointed to a man who was standing a few feet behind me. “That’s the governor, or mayor, of Buenos Aries. There are lots of important people here right now.” The knowledge that I’d been surrounded by so much authority and influence suddenly became very real, and as we walked out of the building into the late afternoon crowd I thought about how amazing it was that as a result of leaving my country to study I was able to sit with people from all different walks of life and hear my own President speak.