Wearing the Poppy: Poetry and the First World War

The ending of the First World War (1914- 1918) will be widely commemorated on November 11th  2018. It was a global conflict that began and ended in Africa; thirty per cent of the British troops served on the Eastern Front. The conflict reshaped the international environment.  Old monarchies failed. The Austro-Hungarian and the Ottoman Empires collapsed. New countries in Europe and the Middle East emerged from the ruins including Czechoslovakia, Poland, Yugoslavia, the Ukraine, Estonia, Latvia, Lithuania, Serbia, Iraq, Lebanon, Syria, and Trans-Jordan. The consequences of that war are still part of our global political landscape.

Yet, in our imaginations and in contemporary representations, the war is located in the trenches of Flanders, a relatively small region of northern Belgium. The images that represent the war were invented there by soldier-poets. They witnessed and defined a betrayal of the young in which lives were sacrificed in relentless futility. What they wrote is what we most recall of the conflict.

The ways in which this history was made has implications for what we teach our students; the realities they experience and study are not simply objective or built in stone; they are invented in the imagination. This history is not about generals or politicians but describes the suffering of common soldiers told in verse. There are numerous sources relating to the First World War but what most persists are the images made by a generation of writers who fought on the Western Front. The power of art (literature, film, theatre, poetry and fiction) is critical to understanding the construction of national memory. As Napoleon said, “What is history but a fable agreed upon?”

Conscious of a symbolic resonance,  the Armistice that ended the war was signed on the 11th hour of the 11th day of the 11th month  in 1918. There are, of course,  no living survivors.  Our collective memory exists primarily in grainy film, fading photographs, and above all, through the filter of iconic images generated by a small group of soldier-poets.  A literate educated generation created this history through poetry.

They defined the place of war as a narrow space in Western Europe, the Western Front, and, in particular, a nightmarish geography of trenches and no-man’s land: space that is owned by no person but is deadly and inhospitable to all – a landscape of dread that Wilfred Owen characterized as “chaotic, crater-ridden, uninhabitable, awful, the abode of madness.” Paradoxically, the geographical focus of the war was narrowed while consciousness of the implications expanded. 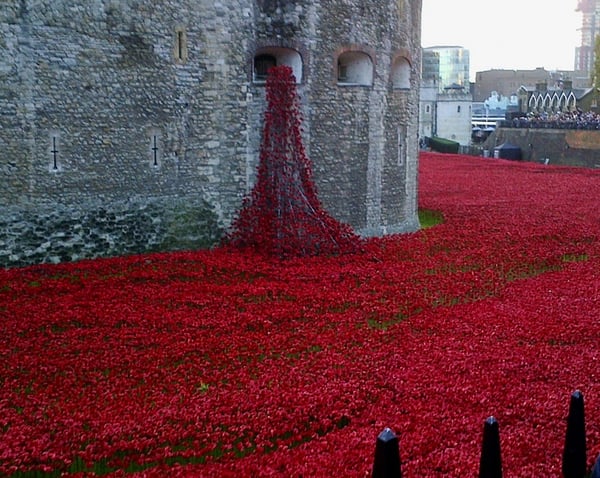 Poppy display at the Tower of London

This month, to demonstrate remembrance, we wear a symbol they invented. The resilient poppy proliferated in the mud of the battlefields but other profound meanings were accumulated around this commonplace flower.

The poppy has been transformed into a global icon transcending space, time and ideologies: an international symbol that demonstrates the persistent power of poetry.  “In Flanders Fields” by John McCrae, (May 1915) is a key text:

In Flanders fields the poppies blow

Between the crosses, row on row

The poppy is a paradox representing beauty in a waste land of destruction, a blood-red color that persists and proliferates in a landscape of death. The poppy symbol helped define the war in our collective imagination.

Traditional associations with flowers, rain and dawn were reconstructed by the poets in the trenches. Instead of metaphorically representing beauty, renewal and reborn hope, they were ironically reinvented as symbols of blood, death, drowning, and menace. The heightened sensibilities and elevated idealisms of Romanticism were rendered cruelly redundant in Flanders’ fields.

Poetry, literature and myth are key factors in the making of history, and in the construction of our understanding of the world. This  history was not defined by historians, military leaders or politicians but, extraordinarily, by poet-soldiers who made little or no difference to what happened militarily or politically between 1914 and 1918.

The protagonists are diminished to a collective identity, reduced (by the similes) to beggars and hags. It also contains a recurrent motif in the poetry of this war: mud, rain and consequent drowning occur over and over again. This is both a representation of real conditions and an objective correlative of a state of helplessness and anguish.

In “Rain” (1916), Edward Thomas transforms the associations of rain from a cleansing and life-bringing force to a harbinger of death:

Rain, midnight rain, nothing but the wild rain

On this bleak hut, and solitude, and me

Remembering again that I shall die

And neither hear the rain nor give it thanks

For washing me cleaner than I have been

Since I was born into this solitude.

Instead of baptismal power and renewal, rain is symptomatic of a deadly landscape. Soldiers in Owen’s “Dulce et Decorum Est”  suffer a gas attack in which  fumes and  rain are combined into one fatal miasma:

Dim through the misty panes and thick green light,

As under a green sea, I saw him drowning.

In all my dreams before my helpless sight,

He plunges at me, guttering, choking, drowning.

This leads Owen towards another perception that becomes embedded in these poems. The poet in extremis has a responsibility to describe terrible realities that are not understood in the rhetoric of patriotism. Ally and enemy are irrelevant notions; shared agonies create a perverted form of community: a brotherhood of suffering that transcends nation. Heroism is a romantic delusion. To tell that truth becomes an ethical imperative. Owen addresses an unknown reader who has perpetuated the “old lie” that it is “sweet and commendable to die for your country”:

My friend, you would not tell with such high zest

To children ardent for some desperate glory,

Owen, who was killed exactly one week before the end of the war, expresses the obligation to bear witness: “ I mean the truth untold,/ The pity of war, the pity war distilled.” The war poets shared an ethical imperative  to expose the old lies.

The ideologies of patriotism are redundant, old values discredited; the older generation has betrayed the younger. The conventional association of age with wisdom is undermined. In Rudyard Kipling’s bitter, guilt-laden poem “Epitaphs of the War” (1919), the dead declare: "If any question why we died/ Tell them because our fathers lied. " Kipling had been a fervent supporter of the war until his only son was killed on the Western Front. Kipling had used his influence to obtain a commission as an officer for his son. The lines precisely articulate his anguished consciousness of guilt of fathers who had betrayed their sons.

Owen’s poem “Strange Meeting” (1918) undermines the traditional idea of the enemy. All participants, enemy or ally, are victims. In a dream of hell, the poem’s narrator meets the soldier who killed him:

I am the enemy you killed, my friend.

I knew you in this dark: for so you frowned

Yesterday through me as you jabbed and killed.

I parried; but my hands were loath and cold.

In a community of the dead “enemy” becomes “friend."

It was no longer simple to identify the enemy. In All Quiet on the Western Front (1929) Erich Maria Remarque expresses a similar sense of a community of suffering:

As in Owen’s “Strange Meeting,” the enemy is not found on the battle field but are those who send the soldiers on both sides to futile death. As the war progressed, the alienation of the young became tangible. The generation gap has its origins in the battlefields of the First World War.

The perception of war was also altered forever.  We now rarely celebrate military victories unambiguously. Instead, the tendency is to perceive the consequences embodied in William Stafford’s aphorism that “every war has two losers.”

Siegfried Sassoon’s “Aftermath” (1919) is a passionate expression of the responsibility to remember the consequences of war:

Have you forgotten yet?...

Look down, and swear by the slain of the War that you'll never forget.

Do you ever stop and ask, 'Is it all going to happen again?'

The poppy worn by thousands is a visible expression of remembrance. It symbolizes the obligation not to forget the sacrifice and futile slaughter of a generation in a world made hostile by inherited hatreds and rampant nationalism.

Four years ago, in an essay called “When Progress Died,” I presented some random statistics. They still have the power to appall: In the summer and autumn of 1914, the French lost as many soldiers as were lost by the Americans in the whole of the twentieth century. The explosives used by the American troops on September 26th, 1918 in Argonne, in three hours, exceeded all of the munitions used in the American Civil War. On the first day of the Battle of the Somme in 1916, more British troops were killed or wounded than the totality of U.S. military deaths in the Vietnam War.  At the Somme, alone, in less than five months, over one million died.  Total casualties of the war are estimated at 37 million. Total military deaths were in excess of 10 million.  In 1916, Lord Lansdowne asked this terrible question to the British government: “Are we to continue until we have killed all our young men?”

We know, of course, that history is not simply or exclusively the exploits of great men in momentous times. It is also the lives of ordinary men and women, the aspirations and experiences of the masses, the ideologies of hope and hate that compete for influence and control. 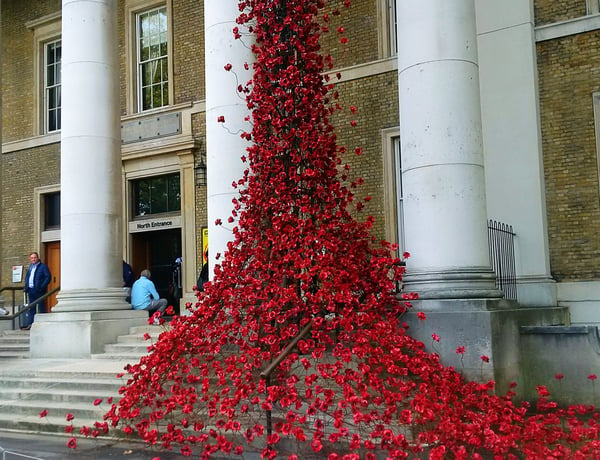 As we look back at the First World War, we perceive few great generals or statesmen who “made history” by their courage or genius. Instead, this history is made in our imaginations by a small group of poets who had little impact upon the military or political stage. They did not create strategy or influence the outcome of battles. Most were common soldiers with uncommon sensibilities. They translated the suffering of mostly anonymous young men and women into images that defined that war for the next hundred years. They created that  history so that when following generations heard the names of the Somme, Ypres, Verdun, Passchendaele, what they recalled was not the clash of armies, or the strategies of generals, but “the pity of war. The pity war distilled.”

That is why we wear the poppy.