With Eyes Wide Open: A Glimpse into London’s Color Palette (A Class Trip) 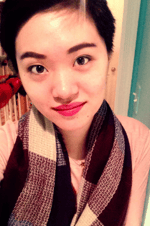 This week, Rikki takes us on a class excursion for a walk along the River Thames and takes note of some of the little things, the colors and history of the city around her.

A couple months ago, I watched a viral video of a colorblind man seeing purple for the first time after he had received a special pair of EnChroma glasses as a birthday gift. It was unquestionably heartwarming to watch the man tear up over what most of us would consider otherwise mundane objects: a Lysol can, the leaves of a potted plant, a wall covered in Post-Its (as it turns out, his colorblindness also affected his perception of reds and greens). The video ended with the man venturing outside, breathing heavily as he knelt on the stone path and ran his fingers through the green, green grass.

Like many others, I felt the pressing need to reevaluate my surroundings after watching the video, perhaps to see if I could capture an inkling of the same awe and clarity that the man in the video must have felt after seeing his world represented in a whole new light. I’ve been trying harder to recognize moments such as these (and moments that make me feel particularly small or big or otherwise), even if it’s just for a brief handful of seconds. Being in a city like London, both so old and so new, has made it very easy for me to just pause and appreciate the little things that I usually take for granted—like color, movement, line. A girl with royal blue jeans, sitting on the steps of Charing Cross. A waste collector pulling bags of trash in a wire trolley, body slightly bent. A woman with an emerald green bag, peeling the foil off a San Pellegrino. A bicycle with a pink, spotted seat. 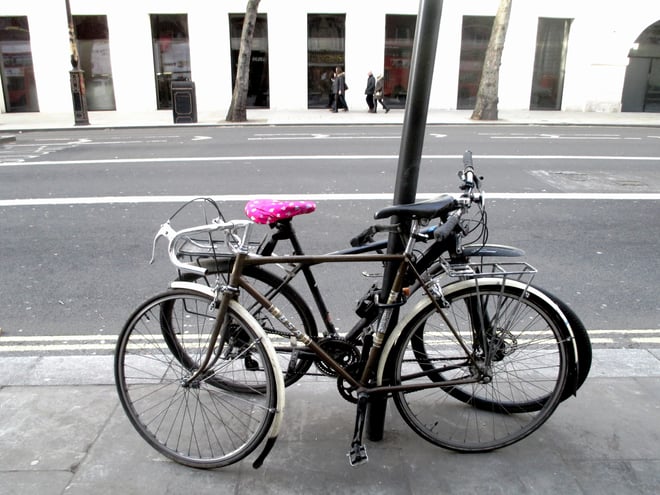 Recently, one of my professors took our class on a four mile trek along the River Thames, which gave me plenty of opportunities to observe things at a slower pace. Along the way, we noticed that some of the buildings (especially Tube stations) were lined with colorful, glossy ceramic, of which our professor explained that the colors were meant to serve as a sort of coding system; in the past, when much of the population was still illiterate, travelers used the color of the buildings to determine their location. It was almost strange to imagine that the ceramic tiles once served a linguistic purpose; now, they seemed like more of an artistic choice to the passing traveler, standing out against the newer buildings made of gray cement and shiny, black windows.

Eventually, we reached a point on the Thames where we could actually climb down to the narrow strip of beach and see the water up close. The beach was not made of sand, but of multicolored rock, glass, and bone. As we crunched our way to the water’s edge, our professor told us that we could easily find the remains of artifacts that were centuries old. The beach was just a collective space where different eras had washed up. Perhaps, in one spot, you’d find bleached, discarded bones from a Victorian meat market. In another, the shards of Roman ceramic bowls. Crusted oyster shells, cigarette pipe tips, the round curve of a piece of sea glass. 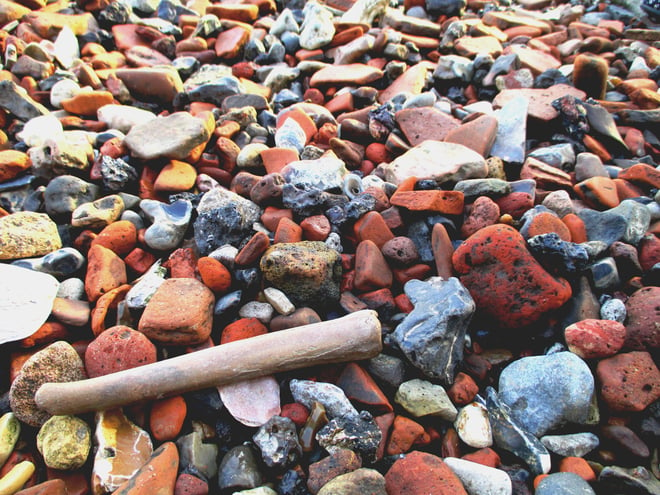 Sometimes, I forget just how old London is. How the city has gone through so much war and destruction and creation. Over 75 years ago, perhaps the very spot I’m sitting now would have been flattened by a German bomb. And yet, there continues to be growth and life. On the banks of the River Thames where the soft, bobbing tide licks up against red rock, sheets of moss grow upward along the stone walls. A picture of vibrant restoration.

I couldn’t help myself; I filled my pockets with as many treasures as I could carry, smooth muddy rock and tiny chips of blue and white ceramic alike. The sun was setting, and the city skyline was a hazy pastel. We still had a ways to go on our class trip; as we were leaving however, my friend looked back at me from his spot on the beach, a dark shape against the backdrop of descending dusk. 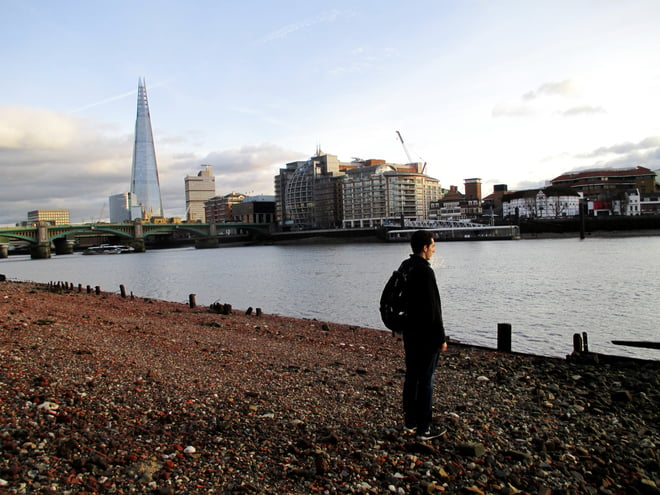